The Dubious Premise of the TRO Against Trump's Revised Travel Ban 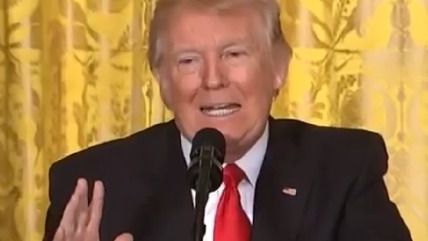 Issuing a temporary restraining order against President Trump's revised travel ban yesterday, U.S. District Judge Derrick Watson declared that "a reasonable, objective observer—enlightened by the specific historical context, contemporaneous public statements, and specific sequence of events leading to its issuance—would conclude that the Executive Order was issued with a purpose to disfavor a particular religion, in spite of its stated, religiously neutral purpose." Watson, who was responding to a lawsuit by the state of Hawaii and the imam of a Honolulu mosque, therefore concluded that Trump's order does not have "a primary secular purpose," as required by the First Amendment's ban on "an establishment of religion." That conclusion seems dubious to me.

It is pretty clear, based on Trump's public statements, that anti-Muslim prejudice affects his thinking about immigration and national security. But that does not mean animus against Muslims was the motive for his order. It seems much more likely that the motive was a desire to seem like he was doing something to protect Americans from terrorist attacks, as he promised to do during his campaign. While it is unlikely that the travel ban will have any noticeable effect on terrorism, courts generally defer to the president's judgment in cases involving immigration and national security. The question is whether that deference should go out the window because of stupid stuff Trump said while running for president.

In December 2015, following the terrorist attack in San Bernardino, Trump recommended "a total and complete shutdown of Muslims entering the United States until our country's representatives can figure out what is going on." A few months later, in a March 2016 interview with Anderson Cooper on CNN, Trump said, "I think Islam hates us." When Cooper asked him whether there is "a war between the West and radical Islam, or between the West and Islam itself," Trump replied, "It's very hard to separate, because you don't know who's who."

After catching flak for that sort of talk, Trump started talking about "extreme vetting" of immigrants from countries "compromised by terrorism," instead of focusing on Muslims per se. "I don't think it's a rollback," he said on Meet the Press last July. "In fact, you could say it's an expansion. I'm looking now at territories. People were so upset when I used the word Muslim. Oh, you can't use the word Muslim. Remember this. And I'm OK with that, because I'm talking territory instead of Muslim."

During his October 9 debate with Hillary Clinton, Trump said, "The Muslim ban is something that in some form has morphed into a[n] extreme vetting from certain areas of the world." When a moderator asked him to "explain whether or not the Muslim ban still stands," Trump replied, "It's called extreme vetting."

In January, two days before he issued his original travel ban, Trump told ABC News, "It's not the Muslim ban, but it's countries that have tremendous terror….It's countries that people are going to come in and cause us tremendous problems." Those countries turned out to be Iran, Iraq, Libya, Somalia, Sudan, Syria, and Yemen, all of which had been excluded from the visa waiver program under the Obama administration because they were deemed sponsors of terrorism or havens for terrorists. The seven countries also happen to be overwhelmingly Muslim, with Muslims accounting for 91 percent to 99.8 percent of their populations.

After Trump issued his order, his adviser Rudy Giuliani, in an interview on Fox News, recalled that "when [Trump] first announced it, he said 'Muslim ban.' He called me up. He said, 'Put a commission together. Show me the right way to do it legally.'"

The revised travel ban, which Trump issued on March 6, dropped Iraq from the list of banned countries and exempted current visa holders as well as permanent legal residents. But it remains true that almost all the people affected by the ban, which imposes a 90-day freeze on new visas for visitors from the six countries, are Muslims.

Although more than 90 percent of the world's Muslims are not affected by the travel ban, Judge Watson says, "the notion that one can demonstrate animus toward any group of people only by targeting all of them at once is fundamentally flawed." That may be true, but the fact that Trump ultimately did not try to impose a literal and explicit Muslim ban does makes it harder to prove he is acting out of hostility toward Muslims.

"Any reasonable, objective observer would conclude…that the stated secular purpose of the Executive Order is, at the very least, 'secondary to a religious objective' of temporarily suspending the entry of Muslims," Watson writes. I like to think I am reasonable, although when it comes to Trump I am certainly not objective. I am inclined to view his policies with suspicion, and the travel ban in particular strikes me as illogical, unnecessary, and (especially in its first iteration) unfair. Yet I have a hard time believing that oppressing Muslims was Trump's main goal in issuing the order. His main goal was looking tough.

Based on the statements that Trump and his advisers have made, you might conclude that his executive order is a Muslim ban in disguise. But you also might conclude that it is not a Muslim ban at all. While his original idea involved a religious test, he dropped that proposal in favor of a less constitutionally problematic travel ban focusing on countries that are "compromised by terrorism." That policy may not make much sense, it may be both overinclusive and underinclusive, and it may not prevent a single terrorist attack. But that does not mean it lacks a secular purpose.