Students at Elite Colleges are the Most Hysterically Opposed to Offensive Speech, Data Shows

Middlebury is just one example. 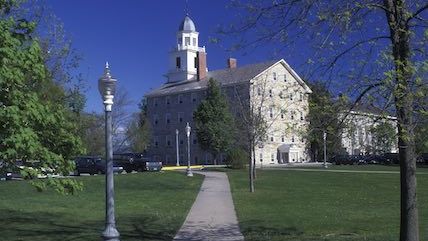 It seems the most privileged students in the country are also the most fragile. Highly expensive, elite college campuses are more likely to play host to the kind of censorious madness on display at Middlebury College two weeks ago.

That's according to data compiled by the Foundation for Individual Rights in Education, and crunched into chart form by the Brookings Institution's Richard Reeves and Dimitrios Halikias. Reeves and Halikias put it all together in a format that makes the trend obvious:

In the figure below, we plot every university in America based on the proportion of students from families with incomes in the top quintile (vertical axis) and from the bottom quintile (horizontal). Marked in red are the "disinvitation colleges" described above. The pattern is clear: the more economically exclusive the institution, the more likely the students have attempted to hinder free speech.

The researchers note that they can't be exactly sure which students are shutting down speakers. It could be the case, for instance, that low-income students do more than their share of censoring. But Halikias and Reeves think that's unlikely, and I do as well.

Indeed, it wouldn't surprise me if students from humble backgrounds are underrepresented among the activist heckler class. They're probably going to class, hitting the library, and making sure their investment in an incredibly expensive college education does not go to waste. Highly privileged students, on the other hand, are probably less likely to appreciate the tremendous opportunity they are being afforded.

It's hard to avoid the conclusion that the students shrieking Marginalization! Oppression! Microaggression! at Charles Murray are some of the least marginalized or oppressed people in all of human history, given their substantial financial resources. The average yearly household income of a Middlebury student is nearly a quarter million dollars.

That's one reason that the average Middlebury student might have actually benefitted from Murray's talk. He had come to campus to discuss his recent book, Coming Apart: The State of White America, 1960-2010, which examines the perceived divide between the white upper class and working class whites who are struggling financially. The book's themes certainly resonate in 2017, after Donald Trump won the presidency by appealing to the exact sort of economic issues Murray identified.

Agree or disagree with Murray, it's inarguable that his thoughts about the white working class are well worth considering, especially for college students who are more likely to uninformed about those voters' concerns. Unfortunately, the exact people who have the most to gain from exposure to intellectual diversity—elite college students—are the ones rejecting it most forcefully.