If Gary Johnson Voters Can Tolerate Clinton and Trump Supporters, The Two Groups Can Live With Each Other

Supporters of good candidates accept election outcomes, so backers of evil candidates should do the same. 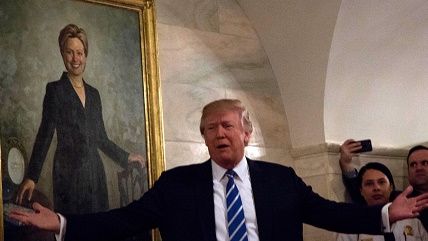 A visiting member of my extended family had to brace himself for the next stop on his trip: Calling on his adult children. He intended to try to rebuild his relationships with them after they'd cut ties over his unpardonable sin: He voted for Trump.

One, that's just unbelievably stupid in a democratic political system which necessarily features opposing candidates competing for office all the frigging time. Disagreement is the basis for the system. There's no way to live a normal life if you cut off contact with even close family members who hold opposing political views.

And two, if a Gary Johnson voter such as myself can overcome the vast divide between my preferred non-evil candidate and the stock villains put forward by the Republicans and Democrats, surely Clinton and Trump supporters can find a way to bridge the moral sidewalk crack that separates them.

I wish I could say that my family was an outlier on matters of political division, but our internal split unfortunately reflects national divisions. Stories on families torn by politics have become a feature of news reports in our strange age. Reuters/Ipsos polling finds that 16 percent of respondents "said they have stopped talking to a family member or friend because of the election." The poll went on to report that "13 percent of respondents said they had ended a relationship with a family member or close friend over the election."

So my family drama is apparently being replayed in living rooms across the country as husbands, wives, parents, and children battle over their contrasting preferences between the intolerant blowhard and the authoritarian robot. Is populist nationalism better or worse than elitist corporatism? Cage match!

Actually, "cage match" isn't too far from the truth. On March 4, anti-Trump protesters demonstrated their dedication to democracy by violently attacking supporters of the bloviator-in-chief at a rally at the Minnesota State Capitol. Way to emphasize your message, folks. Trump fans and opponents likewise clashed in Berkeley, California where police confiscated metal pipes, baseball bats, two-by-fours and bricks from the participants in vigorous political discourse.

You folks do know that there are lots of elections to come, right? And they just might feature differing ideas that will compete for public support?

This simmering tension is remarkable considering how little passionate support either of the two major party candidates stirred among Americans before the election. Last May, FiveThirtyEight noted that "Clinton and Trump are both more strongly disliked than any nominee at this point in the past 10 presidential cycles." Months later, the Republican and Democratic parties locked in the effort in collective fail at their nominating conventions, leading to headlines like USA Today's "Poll: Clinton, Trump most unfavorable candidates ever." Voters were truly torn over whether they were more disturbed by Trump's overweening self-regard, matched only by his dislike of everybody else, or Clinton's deep-seated belief that she should get to make lots and lots of rules that should only apply to little people. Which one was more thoroughly marinated in corruption also was up in the air.

Some of us, to dredge up old arguments, thought that Americans should consider voting for a candidate from outside the major parties who was less overtly repulsive than the donkey and elephant offerings, less ethically crippled, and quite clearly not bone-deep evil. And for a while it looked like Americans were considering the possibility of supporting an awkward but competent former two-term governor. You remember him, right? He was the lousy public speaker who supported civil liberties and economic freedom, and didn't leave a whiff of brimstone in his wake.

But in the end, most of our compatriots remembered their Social Studies lesson that real democracies feature predetermined political choices that never die, but exist in an undead state forever, feeding on their hosts and recoiling from sun—Well, I'm probably confusing my old textbook with Dracula, but the end result was the same.

Sure, some voters opted for Gary Johnson, or the Green Party's Jill Stein, or Evan McMullin. But most voters dutifully trooped to the polls, swallowed hard, and made a choice between two candidates almost the entire country loudly proclaimed unpalatable. And Donald Trump won in a squeaker over Hillary Clinton.

And now Americans are battling each other over which crappy, distasteful candidate should have won.

But remember, just months ago, Americans agreed that they were both crappy and distasteful. That really doesn't give the people who chose either major party candidate the moral authority to bash backers of the other. Meanwhile, those of us who voted for other candidates who we actually found to be decent human beings have made our peace with the election outcome. We may not be happy with the results of the final tally, but we're not going to shun those who were so foolish as to vote for Trump or Clinton—even though our political choices were vastly better than the ones they made.

Because life goes on. And we long ago learned that we have to live alongside people with whom we disagree, to do business with them, eat meals with them, and even sleep next to them.

So if Gary Johnson voters can find a way to cross the huge moral gap separating us from the likes of Trump and Clinton supporters, surely they can bridge the relatively small divide between their tribes. And maybe they can even keep their families intact despite disagreements.