Snuggies Are Blankets, Not Clothes

Federal trade court rules that lazy coziness will be taxed at a lower rate. 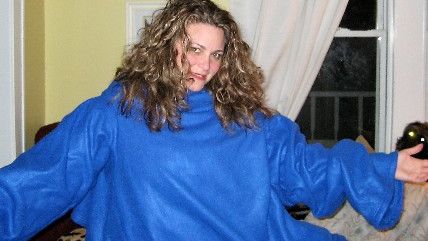 Last week I interviewed Pietra Rivoli — a Georgetown University international business and finance professor, as well as the author of The Travels of a T-Shirt in the Global Economy: An Ecomonist Examines the Markets, Power, and Politics of World Trade — about bipartisan job protectionism and hostility to free trade in the age of President Donald Trump. Rivoli's book uses a tourist t-shirt purchased in Florida to illustrate the inter-connectedness of the global economy, and how every trade agreement, tariff, or labor deal comes with international ramifications even for a seemingly minor item local a t-shirt.

The sleeved blanket/bathrobe hybrid known as the Snuggie is no different. Which is why a recent U.S. Court of International Trade decision rejecting the U.S. government's insistence that the Snuggie is an item of clothing — instead (as its manufacturer Allstar Marketing Group has insisted) ruling the item to be a blanket — matters.

Judge Mark Barnett based his decision in part on the company's marketing of the item as "the blanket with sleeves!" and the fact that it doesn't close in the back. The defendant in the case, the U.S. Department of Justice, argued the Snuggie was more akin to "priestly vestments or scholastic robes," according to Bloomberg BNA.

Ana Wanson explains in the Washington Post that the ruling was crucial for Allstar because the Snuggie is produced in China and is therefore subject to an import tariff. Blankets come with a tariff of 8.5 percent, but "pullover apparel" is pinched for 14.9 percent. That's a difference worth taking the government to court over. As Wanson notes:

The Snuggie case and others like it show how companies may go to great lengths to avoid the barriers governments impose on imported products. President Trump has argued for even stiffer tariffs on products from countries that refuse to negotiate better terms of trade with the United States, like Mexico and China. He has also backed away from free trade deals that would slash tariffs among many countries, and expressed a desire for negotiating deals with countries one-on-one.

Read my interview with Rivoli, who says "companies and entrepreneurs often find creative ways to deal with all kinds of barriers," here.