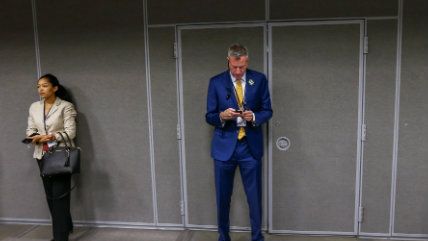 The mayor of New York, Bill de Blasio, is a tax-and-spend bleeding-heart liberal who ordinarily would be way, way down on the list of people that this center-right columnist would want to spend any time or energy defending. So give the Obama-Trump-Schumer U.S. attorney for the Southern District of New York, Preet Bharara, some credit. With his open-ended, leaky, and so far inconclusive yearlong investigation into "corruption" by the mayor and his administration, he's achieved the nearly impossible task of turning de Blasio into a sympathetic figure.

Our story begins back in April of 2016, when The New York Times reported that in the preceding month the mayor "learned of a federal corruption investigation into top Police Department officials. The inquiry revolved around two of Mr. de Blasio's big-money political supporters and appeared to extend into his fund-raising efforts more broadly."

"Mayor de Blasio's Campaign Fund-Raising Scrutinized in U.S. Corruption Inquiry," was a typical Times headline, one of dozens, heavily reliant on anonymous sources, that have appeared over the past year in various New York outlets.

A December 2016 Times article headlined "Grand Juries Said to Hear Testimonies on Inquiries Into de Blasio Fund-Raising" reported that the inquiries "could wrap up in a matter of weeks."

Alas, no such luck. The mayor and his top aides have, meanwhile, racked up millions of dollars in legal fees on outside lawyers to defend against the investigation. The lawyer representing the mayor, Barry Berke of Kramer Levin, has tangled with Bharara on a series of white-collar criminal cases and recently got a federal judge in Manhattan, P. Kevin Castel, to order regular updates on federal investigations into unauthorized leaks to the press of grand jury information in insider trading cases.

The vague cloud of suspicion cast anonymously over the mayor and some of his aides that have been named in the press coverage risks violating at least five of their Sixth Amendment rights—to confront their accusers, to a speedy and public trial by an impartial jury, and to be informed of the nature of the accusation against them.

That amendment isn't just there to allow guilty criminals convenient ways to get out of jail. It exists to provide protection against these sorts of extended whisper campaigns that wind up smearing reputations even before any charges are filed.

Beyond the civil liberties issues, even as a practical matter, if Bharara's goal is educating the electorate or cleaning up New York politics, his tactics are redundant, counterproductive, and curiously selective.

Redundant, because it was clear to anyone paying attention even before the federal probe that de Blasio's governing mode involved shaking down anyone who wanted anything from the city. When the Collegiate School wanted approval to construct a new school building, the city demanded a related payoff of at least $50 million for "affordable housing." The furniture company West Elm was somehow prevailed upon to cough up $65,000 worth of furniture for the residential quarters of de Blasio's taxpayer-owned mayoral mansion.

Counterproductive, because rather than luring honest opponents of de Blasio into the mayoral race, the federal probe has served as a deterrent. The uncertainty about its outcome has frozen the race as potential candidates await either prosecutorial action or an all-clear signal. And the warning that city campaign fundraising is going to be under a federal criminal investigative microscope isn't exactly encouragement for anyone considering getting involved in raising or giving political money in New York City for any office.

Curiously selective, because if you had to name the single New York politician most known for aggressive fundraising from people whose business he is able to affect—the area for which de Blasio is supposedly under scrutiny—the politician who would leap to mind wouldn't be de Blasio, but rather, one Sen. Charles Schumer.

A front-page news article in The New York Times reported, "Donors describe the Schumer pitch as unusually aggressive: He calls repeatedly to suggest breakfast or dinner, coffee or cocktails. He enlists intermediaries to invite prospects to events and recruits several senators to tag along. And he presses for the maximum contribution—'I need you to max out,' he is known to say—then follows up by asking that a donor's spouse and four or five friends write checks, too."

That article about Schumer fundraising from Wall Street executives he acted to protect appeared in 2008, before President Obama nominated Bharara as U.S. attorney for the Southern District of New York. Back in 2008, Bharara had another job—as an aide to Senator Schumer. It was also Schumer who reportedly gave Donald Trump Bharara's phone number and recommended that Trump retain Bharara as the top federal prosecutor in Manhattan.

For reasons that by now should be clear, I hope Bharara backs down and de Blasio is cleared. But it's almost worth a trial just for the long-shot chance that de Blasio, as part of his defense, might somehow get the opportunity to examine the Bharara-era fundraising of Schumer, who is now the Democratic leader in the Senate. Making even de Blasio seem deserving of sympathy is a feat that only the Schumer-Bharara combine could achieve.