Zodiac Turns 10: Why This Amazing Film Is Libertarian

A subtle critique of law enforcement and its limits. 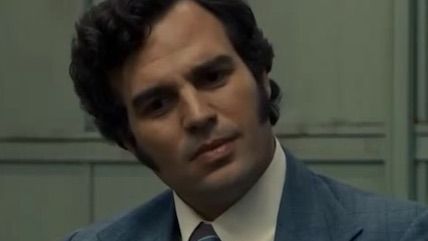 The Washington Post's Alyssa Rosenberg notes that David Fincher's Zodiac was released 10 years ago. The film received rave reviews, but still seems underappreciated by the general public. In her retrospective, Rosenberg notes that Zodiac—which chronicles the efforts of police officers and journalists to catch a real-life serial killer in the 1960s and 70s—still resonates:

The characters have resources to pursue their investigations, and they're given time and plenty of leeway by their superiors (though one local politician runs for governor on the argument that the cops didn't have what they needed to crack the case). And neither is "Zodiac" a story about the sorts of failures involved in the Vietnam War, where brilliant people, restricted both by their own faith in technocratic solutions and their fears of being seen as soft on Communism, made fatally terrible decisions.

Instead, Fincher captures the uncertainty and loss of confidence that follow from a prolonged failure by institutions and people who are doing everything they're supposed to, only to find that it doesn't produce the correct results. …

Ten years after "Zodiac" was released, and almost fifty years after the July 4 killing that sets the movie in motion, we're still living with and working through the consequences of the decline and loss of faith David Fincher captured in this masterful film. Fincher's "Fight Club" offered up a vision of weaponized male turned against society as a whole, while his "Gone Girl" portrayed female anger that had been distilled into a particularly venomous domestic poison. "Zodiac" is his movie for the rest of us, who have to live in a world going slowly insane without losing ourselves.

For me, Zodiac was a story about obsession—what it feels like to care about something that most other people have lost interest in. The serial killer—who calls himself the Zodiac and sends cryptic messages to the authorities—slaughters a handful of people, and then largely retreats into the shadows. He botches some of his attacks, and others don't fit his profile, calling into question whether he's a single person or a group of completely unrelated nutcases taking advantage of a momentary spotlight.

As days become weeks and even years, everybody moves on, except the police officers assigned to the case and the newspaper cartoonist who can't let it go. They're driven, not by public safety—as one character points out, more people die crossing the street than at the hands of the Zodiac killer—but by their own insatiable, personal need to solve the case. Asked why he still cares about a serial killer who has long since fallen inactive, Jake Gyllenhaal's character snaps, "I need to know who he is!" Anyone who's ever attempted a 500-piece jigsaw puzzle, but misplaced the last few pieces, will relate.

Zodiac also makes some lightly libertarian criticisms of authority—in particular, its limits. The various representatives of the institutions that fail to capture the killer—the police, newspapers, local politicians—aren't evil, or incompetent. They're decent people trying to do right by the citizens of California. But they encounter structural problems: the crimes cross city and county lines, and no single entity has all the relevant information. In an early scene, the lead detectives ask a county official to make copies of the evidence in his possession and fax it to San Francisco PD. He replies, "We don't have telefax yet."

The film also explores the notion that violence is random, and its underlying causes don't fit neatly into preconceived narratives. The Zodiac killer isn't Hannibal Lecter, or Ramsay Bolton. He's a weird loner whose actions don't reflect a discernible ideology of evil. This kind of real-world violence is the hardest to address through public policy, because there's no identifiable reason for it.

In the end, it took someone outside the law enforcement bureaucracy—Gyllenhaal's character, cartoonist Robert Graysmith—to finally solve the case, to the extent that it's solved at all.