Why Trade Can Still Thrive Under a Protectionist Like Donald Trump

Pietra Rivoli, author of The Travels of a T-Shirt in the Global Economy, talks to Reason about the politics of trade. 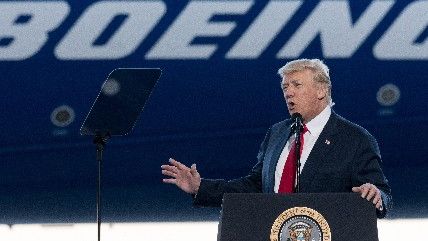 Hostility to free trade is now a bipartisan feature of American politics. Donald Trump won last year's election in part by promising to pull out of trade agreements, impose trade tariffs, and preserve jobs in dying industries at all costs. On the left, Bernie Sanders campaigned on protectionism and portrayed the sometimes trade-friendly Hillary Clinton as a tool of big business who had no real sympathy for the plight of blue collar workers.

But free trade antagonists like Trump and Sanders tend to paint overly simplistic pictures of how trade actually works, and the ways in which our economy increasingly depends on, and benefits from, a complex web of national and international production.

That's what makes Pietra Rivoli's 2005 book The Travels of a T-Shirt in the Global Economy: An Ecomonist Examines the Markets, Power, and Politics of World Trade so valuable.

In the book, Rivoli, a Georgetown University international business and finance professor, writes of buying a tourist t-shirt in Fort Lauderdale, Florida, and then meticulously investigates the the economic and political factors of every stage of its production and ultimate sale to the author for $5.99. Rivoli's t-shirt odyssey led her to travel all over the United States and the world—speaking with, among others, cotton farmers in Texas, factory workers in China, and used clothing entrepreneurs in Africa—examining the production and trade of each of the shirt's many components, the political factors that determined the location of each stage of production, and even the economic ramifications of discarded clothing that often ends up in the Third World.

The book is a valuable primer on how political considerations affect everything we buy and sell, and how even with both major political parties lurching towards increased hostility to trade, there are always opportunities for innovation.

Reason spoke with Rivoli over the phone earler this week.

Reason: Your book does a great job of explaining the mechanics of trade, the human costs and benefits, and the political factors that inform every aspect of production. Now that we have a president who is focused on building physical barriers as well as economic barriers, what do you think will be the results say one year, or even five years down the road as a result of President Trump's trade policies?

Rivoli: There's a theory in economics called the "mercantilistic approach," which basically said that exports are good and imports are bad. President Trump has talked about our trading relationships with different countries essentially as you might look at a perfect income statement, saying we are losing when we have a trade deficit with country X or country Y. Losing is bad, so we want to try to make trade relations more balanced.

But you don't want to look at a trading relationship as an income statement. A trade deficit is not equivalent to a business loss and we don't measure the health or progress of economy using that metric. There are better and more standard metrics, such as job creation or economic growth or standards of living.

What crosses borders today are not final goods, what's dominating is trade in tasks, and certain things done in certain places. If you look at a t-shirt, you have all kinds of trade embedded in this t-shirt that does not show up when you just look at the final product. In the case I wrote about [in the book], you have a trade flow when the t-shirt enters the United States and that's what you see in the trade data and statistics when you look at the tag in the back of the shirt. But actually behind that trade flow is lots of other trade that is represented in the global value chain (GVC)—the cotton might have started out in the United States or the yarn might have started out somewhere else. This trade behind the trade is what we call intermediate trade and today constitutes about half or more of global trade flows.

This is where you have to be really careful from a policy perspective because as soon as you start to try to limit imports of intermediate goods, then you start to raise the cost or reduce the choice of companies in the United States using those goods as part of their production.

The classic case many talk about right now are auto parts in the global value chain of U.S. automatons, specifically Mexican auto parts coming into the U.S., then going into American cars that are then exported or sold in the U.S. If we put barriers and cost on those imports of auto parts, then we make cars more expensive and less competitive here. That would be an example of where the mercantilist thinking is actually at cross-purposes with what we probably want. I think a standard, traditional economist view of trade protection is that it raises prices and limits consumer welfare, that's a notion that goes back to Adam Smith. The new notion of global value chains adds another layer of cost and complexity to trade protection because it is essentially limiting how companies make their production choices.

Reason: In his address to Congress this week, President Trump said he supports free trade, but it has to be fair trade, and he has oft-stated his preference for top-down central planning. There's a passage in your book where you write that the real tragedy of central planning is the "crushing of intellect," and that "central planners will use the wrong goods, use the wrong inputs, set the wrong prices, hire the wrong people and ultimately produce shoddy products and not enough of them."

Under President Trump, are we trending in that direction? And do you think he would have the congressional support to impose the kind of limits on trade he's talked about?

Rivoli: I don't. If you look at the data on which congressional districts across the country are trade-dependent, there would not be broad-based support for building these kinds of walls in an impermeable way. The quote you just read from my book talks about a very particular setting, which is pre-Xiaoping China. It's certainly a stretch for me to think we are somewhere near that territory.

That said, I generally don't like the term fair trade because it means so many very different things. People use the term to suggest workers are being treated well. There are people who talk about fair trade in terms of not having government subsidies or currency manipulation. But we don't really know what the term means. It sounds good—everything to be fair—but we don't have an agreed-upon definition for that.

Reason: You wrote in your book about "textile Republicans" who were against things like the Central America Free Trade Agreement (CAFTA), and crafted policies that led to things like requiring the pockets sewn in t-shirts to be produced in the U.S. These "free market" Republicans are purposefully adding another layer to the trade that goes into the creation of a t-shirt. Do you think Republicans and Democrats are moving closer on certain economic issues such as job protectionism?

A lot of what you heard in this election cycle was opposition to trade agreements. You heard a lot about NAFTA (North American Free Trade Agreement), you heard a lot about TPP (Trans-Pacific Partnership), but a legitimate criticism of these trade agreements is that the process by which they are negotiated is opaque. There are often a lot of special interests at work in terms of what these final agreements look like, and Congress has typically only up or down power on them, so they're not really subject to any kind of broader public discourse. That's why I think you will probably continue to see this reticence on trade agreements. This is not just true of the United States, it's true the world over, including of course in Europe right now. That's different than concerns about trade itself.

Reason: You also wrote in your book about how protectionism can help trigger entrepreneurial instincts. Specifically, how protectionism in 18th century England kind of sparked the Industrial Revolution. This is kind of crystal ball stuff, but given the bipartisan lurch against free trade right now, do you see potential as well?

Rivoli: That's an interesting question. I think you do already see responses to the barriers. For example, it's seems pretty true that China is worried about their access to the U.S. market, so that's a barrier they are potentially facing, and their response to that barrier is to set up factories in the United States. Companies and entrepreneurs often find creative ways to deal with all kinds of barriers. In the case of trade protection, in the 1980s the United States placed limits on Japanese auto imports. The most obvious thing that happens in a case like that is production moves.

Reason: You made a very interesting point in your book that seemed directed at people concerned with income inequality and wealth disparity when you wrote, "The most vulnerable have more to fear from power imbalances and weak institutions than from competitive markets." In the context of the Trump administration, where the president and many of his supporters seem to believe there will always only be a finite amount of jobs, how does one make a convincing argument that a rising tide lifts all boats?

Rivoli: One of the forces that led to Trump was this sense that we have socialism for the elite and capitalism for everyone else. A favorite example I tend to use is "Dumpling Street" in Beijing, where you have dozens of guys lined up with their little stalls selling dumplings. You'd think this should be a pretty good example of a competitive market. Whoever has the best dumplings at the best prices win, right? But it doesn't always work that way, because you have one guy who was able to bribe his way into securing the corner spot.

There are all kinds rules that get implemented that reflect differences in access to power. Those differences affect economic outcomes and so—as I think you recognize—one of the core points of the book is that this unequal access to the rules or to influence or to power limits people's ability to compete economically.

This interview has been edited for clarity, style, and length.