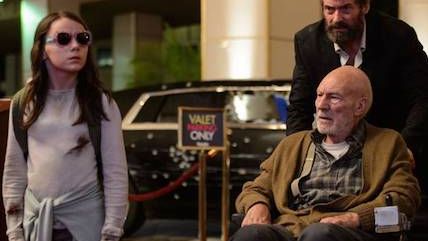 The year is 2029, and our man Logan (Hugh Jackman)—the super-powered Wolverine—is running out of super. With his 200th birthday drawing near, Logan's self-healing hide doesn't auto-repair quite as well as it once did, and his drinking is out of control. These days, he's barely getting by as a Texas limo driver (just roll with that), returning back across the border each night to the abandoned Mexican industrial plant he calls home. There, assisted by a fellow mutant, the amiable albino Caliban (Stephen Merchant), he tends to the needs of his increasingly senile mentor, Professor Xavier (Patrick Stewart), and tries not to contemplate the future, however much of it there may be.

James Mangold's Logan is the best of the three Wolverine movies, in part because it's the last. There's no more need for escape-hatch plot strategies here—this is it. Jackman and Stewart say that they're both moving on, which would seem to mean that their characters—barring some Peter-Cushing-style techno-gimmickry—won't be reappearing anywhere else in the X-Men franchise, either. Set free by the R rating that helped make last year's Deadpool such a globe-siphoning box office sensation, Logan has the usual beyond-PG movie trappings (a bare breast here, a "fuck'" or an "asshole" there); but it also has grownup concerns. There's plenty of butt-whomping, flesh-shredding action, and a lot of it's really first-rate; but in contemplating mortality and loyalty and connection, the picture also sounds a deep human note that might be what you'll remember most fondly when looking back on it.

Logan now lives in a post-mutant world, or so it seems—no new members of his species have been documented for 25 years. ("We weren't part of God's plan," he observes, in his trademark cheerless way.) But then he's approached by a Mexican woman named Gabriela (Elizabeth Rodriguez), who's accompanied by a strange little girl called Laura (Dafne Keen, an instant star). The child's given name is X-23, and she's part of a new generation of mutants that was cooked up by the sinister Transigen company at an illicit lab in Mexico City. Laura and some of her fellow junior mutants have broken out, and now she needs Logan's help to get to a mutant safe space in North Dakota, a place called Eden.

The kid is awfully winsome, and very Logan-like—note the retractable mini-claws, and that cute little snarl. But Logan isn't inclined to care about Laura or her super problems or much of anything else, frankly—he just wants a drink. He's soon prodded into action, however, by a cyber-enhanced Transigen enforcer named Pierce (Boyd Holbrook), who arrives on the scene with a squad of motorized goons on a mission to locate Laura for his own shadowy purposes. All kinds of top-drawer mayhem proceed to ensue.

The movie is nicely balanced between the X-Men's past and future. In fact, the old X-Men comics have become part of the mythology. (Logan doesn't believe there is a place called Eden—especially once he notices that it's featured in one of the comics Laura has been reading.) Logan and Xavier, clearly at the end of their days, lend the story an autumnal mood. But little Laura suggests that the mutant line is nowhere near dying out yet. Keen, who was 11 years old when the movie was shot, is the gymnastically inclined offspring of a noted Anglo-Spanish theatrical family. She paces Jackman through each of the film's several furious action scenes, leaping, slashing, bashing and generally inflicting pain and termination on whatever burly bad guys unwisely get in her way. It's a sensational movie debut.

The picture ends on a perfect pulp image that draws a line under the Jackman Wolverine movies, but also points a way toward something new. Rarely would a sequel be so highly advised.