A dispute over 2.5 acres of land in the Wisconsin woods has morphed into a major property rights case. Several other states are watching it closely. 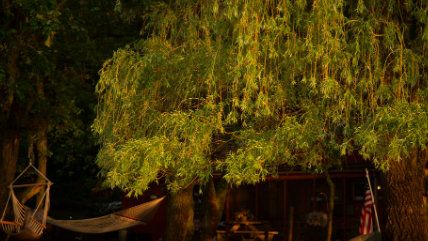 After a decade of legal wrangling over the fate of their half-century old cabin, the Murr family will take their property rights dispute from the backwoods of western Wisconsin to the marble halls of the U.S. Supreme Court.

And what began as a regulatory battle over less than three acres of land has morphed into a legal case attracting interest from eight other states.

The Supreme Court next month will hear oral arguments for Murr V. Wisconsin, a case that originated all the way back in 2004, when Donna Murr and her siblings tried to sell a parcel of land along the St. Croix River that the family has owned since the 1960s. They couldn't do that, they were told by St. Croix County and the state Department of Natural Resources, because the parcel was not large enough to comply with regulations regarding the distance between waterways and buildings.

There's nothing built on the 1.25 acre parcel the Murrs were trying to sell, but the family own a cabin that sits on an adjacent 1.25 acre piece of land. They couldn't sell the vacant parcel without tearing down the cabin on the other parcel, they were told.

Even though the two pieces of land are separate—Donna Murr says the family has paid taxes on them, separately, since buying the neighboring, vacant parcel in the 1960s as an investment—the county and state say they can combine the parcels for regulatory purposes because they have a common owner, thanks to a state law passed in 1975.

"We aren't going to be allowed to sell the second parcel, unless we tore down the cabin next door. We were stunned," Murr said Tuesday on a conference call with reporters. "We couldn't believe that the government would happily take our property tax dollars for fifty years, and then deny us the basic property rights here."

Since they can't sell the vacant parcel or build anything on it, its value as an investment has diminished by as much as 90 percent. Donna Murr said the property was appraised for $400,000 before the Murrs tried to sell it, but when the family asked the county to buy it from them (since no one else was allowed), they were offered a mere $40,000.

Murr told the Eau Claire Leader-Telegram last year that the family has paid more than $78,000 in taxes on the property since purchasing it. Some investment.

The Pacific Legal Foundation, a California-based libertarian law firm, is representing the Murr family in the case. Attorneys for PLF say they hope to strike a blow against an all-too-common problem across the country: that regulators must provide just compensation when prohibiting private property owners for using their property as they want.

The Fifth Amendment requires government to compensate land owners when property is taken for a public purpose. If the Supreme Court sides with the Murr family, the case could serve to extend that principle to situations where property, for all intents and purposes, has been seized by regulators who are prohibiting the use or sale of land.

"This case has broad implications, because the Murrs are far from alone in confronting this issue," says John Groen, an attorney for PLF. "The problem of bureaucrats and courts defining the parcel as a whole to include adjoining lots in common ownership presents itself throughout the country."

In briefs filed with the Supreme Court in advance of oral arguments, St. Croix County defends its decision to merge the two parcels of land for regulatory purposes. The existing cabin (and any future construction on the adjacent parcel) violates rules passed in the 1975 banning construction near the river.

The county also argues that the Donna Murr, her siblings, and her parents (who owned the lots until the mid-1990s, when they sold them to their children) have never "treated them as distinct parcels in their day-to-day use of the lots" and have used the vacant lot for parking, camping, and volleyball games.

The state of Wisconsin, in a brief filed with the Supreme Court, argues that the two parcels should be viewed legally as a single piece of property, but also asks the court to use this case to clear up longstanding, complicated legal issues surrounding when states must compensate homeowners when similar conflicts between private property and government regulations occur.

That's why other states are watching Murr V. Wisconsin too. Some are even getting involved.

Nevada filed an amicus brief with the U.S. Supreme Court arguing that Wisconsin's interpretation of the law is incorrect. Eight other states have joined Nevada's brief, which emphasizes how the Murr case could have negative consequences for states—particularly western states—that occasionally butt heads with the federal government over land use rules.

If allowed to stand, it would undermine the interests of state governments in multiple ways, Nevada's attorneys argue in the brief, because it would leave their property vulnerable to large-scale uncompensated encroachment by the federal government.

"If regulators do not have to pay compensation to affected property owners in cases where the latter happen to possess contiguous lots, they will often have little incentive to fully consider the costs and benefits of proposed regulations, and prioritize those with the greatest likely beneficial impact," they argue. "Aggregating contiguous parcels under common ownership into a single super-parcel will undermine traditional notions of property rights, have deleterious economic consequences, and encourage the undisciplined regulation of individuals' and states' property."

(The Reason Foundation, which publishes this blog, filed an amicus brief with the Supreme Court in defense of the Murr family's claim).

For the Murr family, this case is deeply personal. The cabin that has been in the family for five decades is in need of repair, and selling the extra chunk of land is the only way they will be able to pay for the expensive upkeep of their personal getaway, Donna Murr says.

For the states involved in the case—from Wisconsin to Nevada—the Supreme Court's ruling could have ramifications that stretch far beyond a tiny parcel of land on the banks of the St. Croix River.