The Solutions Are Sitting Around a Campfire, Not In Congress

Everything's going to be more or less ok. 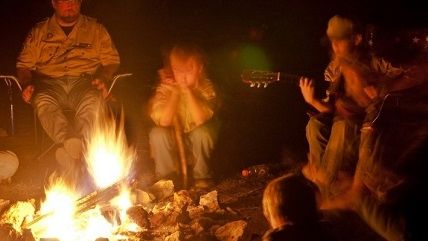 "Our Miserable 21st Century" is the headline on a recent piece in Commentary, not to mention a pretty good summation of the general mood these days. Economic malaise, an opioid crisis, climate change, spiking crime rates in major cities, a political atmosphere that's about as chummy as a prison riot…

Nobody should dismiss these grim signs of impending societal collapse, or the many others that, while equally important, have not yet received sufficient attention. (I refer of course to the use of "concerning" as an adjective—as in "The president's behavior is very concerning"—along with the appalling, yet apparently proliferating, belief that "to include" is a suitable replacement for "including." It isn't.)

At the same time, it is possible to make too much of our current troubles. A little perspective is in order.

One way to regain that perspective is to spend a few minutes on HumanProgress.org, which tracks the generally meliorating conditions of human existence over the short, medium, and long term. It is filled with data showing how much better things today are than they once were: Hundreds of millions of people have climbed out of poverty. Literacy rates are rising, the gender wage gap is shrinking, child mortality is falling. Air travel is both cheaper and far less dangerous, food is more plentiful, malaria deaths have plunged, and on and on.

If your learning style is more experiential than data-driven, then you might try spending a few days with a Cub Scout pack. Few things are as likely to restore your confidence that everything is basically OK.

To begin with, you will not hear word one about President Trump. That in itself is a blessing. Because no matter how you feel about Trump, the topic is guaranteed to enrage: Either you are enraged by what the president is doing, or you are enraged by all the people who are enraged by it. The man must be the country's No. 1 salesman for hypertension medication.

You also won't see any strife over identity politics. Eight-year-old boys don't care if you're an immigrant or black or white or Asian or Muslim or evangelical. They just don't. As comic Denis Leary once put it, "Racism isn't born, folks, it's taught. I have a 2-year-old son. You know what he hates? Naps. End of list."

And you won't see any class divisions. One boy's family might live in a trailer park. Another's might live on Park Avenue. Nobody cares. What they care about is making sure their Pinewood Derby cars come in right at the regulation weight limit of 5.0 ounces, so they will overcome the forces of inertia and friction and get rolling down the track more quickly.

This is a matter of intense focus and concern (though it is emphatically not "concerning")—especially to the parents, some of whom have devoted far more time than any grown person should finding ways to add a marginal amount of velocity to a block of pine sitting on four plastic wheels.

The parents also spent untold hours sitting around dinner tables planning Cub Scout events, and more untold hours at those events, to keep the momentum going in an organization that exists for the simple, old-fashioned purpose of teaching kids how to be better people: better students, better stewards, better children to their parents, better citizens of their communities.

And to keep that momentum going they've gone on campouts where they stood in the cold rain eating scorched eggs and raw bacon around a campfire with a ridiculously high smoke-to-BTU ratio, complaining about all the sleep they didn't get thanks to lying on a bed of jagged rocks.

Some of them, if they were Boy Scouts, share stories about how different camping was when they were coming up. None of this fancy high-tech gear, microfiber jackets with water-beading technology and headlamps brighter than an airport runway. Back then you had a smelly wool coat and a flashlight that weighed six pounds and emitted a glow so faint it wouldn't impress a lightning bug. There weren't any bathroom facilities, you had to use the outhouse—or dig your own latrine.

Then there was that time when the troop hiked six miles through the woods and had to put up the tents in a downpour, and nobody could get a fire started so there was no way to cook dinner and everyone huddled inside their sleeping bags, shivering and hungry and miserable, and didn't do much of anything until Brian Schneider barfed inside his tent. There was a long silence, and then somebody more hungry than the rest called dibs: "I get the big chunks."

While you're telling that story you look around and realize none of the boys has touched an electronic device for a day and a half. They're all running around in the woods with sticks, building forts and having swordfights. And you think, it's not just this bunch of kids; this is going on all over the country. And it's not just the Scouts but church groups and 4-H and Big Brothers Big Sisters of America and sports teams and too many others to name. None of it created by Washington, none of it imposed by executive order. Just ordinary people, doing their part.

You look around and you realize: One of these days these kids are going to grow up and take over. And things will be just fine. Maybe even more than fine.