Is Michael Flynn's Resignation a Sign of the Deep State's Power, or a Sign of Its Vulnerability?

The intelligence community is the most-entrenched bureaucracy of government. Does it answer to any president? 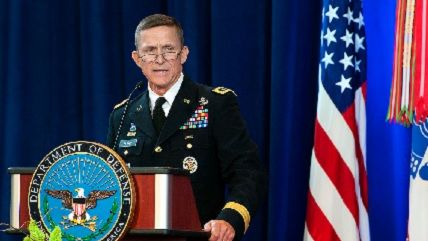 Like Scott Shackford, I'm pro-leaks about government activities, especially when they serve to reveal covert actions and limit the power of the state. Revelations by the likes of William Binney, Chelsea Manning, and Edward Snowden have all served this purpose even as they have proved catastrophic (in various degrees) to the leakers themselves.

The resignation of President Trump's national security adviser, Michael Flynn, after it became clear he lied about contact with the Russian ambassador before Trump's inauguration, is not so cut-and-dried, though. According to all reports, transcripts of calls involving Flynn showed considerable contact between Flynn and Russian state actors. Flynn was ostensibly cashiered because he lied to Vice President Mike Pence, which is a good-enough reason to can any employee. But as Eli Lake writes at Bloomberg View, that explanation is hardly convincing for an administration that is constantly bullshitting about everything from the size of the president's crowds to his business acumen. Something more is at work here, says Lake, and attention must be paid:

It's not even clear that Flynn lied. He says in his resignation letter that he did not deliberately leave out elements of his conversations with Ambassador Sergey Kislyak when he recounted them to Vice President Mike Pence. The New York Times and Washington Post reported that the transcript of the phone call reviewed over the weekend by the White House could be read different ways. One White House official with knowledge of the conversations told me that the Russian ambassador raised the sanctions to Flynn and that Flynn responded that the Trump team would be taking office in a few weeks and would review Russia policy and sanctions. That's neither illegal nor improper….

Normally intercepts of U.S. officials and citizens are some of the most tightly held government secrets. This is for good reason. Selectively disclosing details of private conversations monitored by the FBI or NSA gives the permanent state the power to destroy reputations from the cloak of anonymity. This is what police states do.

In the past it was considered scandalous for senior U.S. officials to even request the identities of U.S. officials incidentally monitored by the government (normally they are redacted from intelligence reports). John Bolton's nomination to be U.S. ambassador to the United Nations was derailed in 2006 after the NSA confirmed he had made 10 such requests when he was Undersecretary of State for Arms Control in George W. Bush's first term. The fact that the intercepts of Flynn's conversations with Kislyak appear to have been widely distributed inside the government is a red flag.

Hopefully those conversations will be made public so that Americans can decide for themselves whether Flynn crossed various lines (Democrats are calling for the release). In the meantime, what we're left with is a pretty fearsome display of power by "deep state" actors in the intelligence community (IC) who were clearly threatened by Flynn, a temperamentally off would-be reformer of IC practices who had been fired by President Obama. Whether that amounts to what Lake calls "a political assassination" and Damon Linker calls a "soft coup" at The Week is open to debate. But one thing that seems pretty clear is that what we are witnessing is a clash between two major sources of power within the government—the executive branch and the IC—at war with each other. Lake again:

In normal times, the idea that U.S. officials entrusted with our most sensitive secrets would selectively disclose them to undermine the White House would alarm those worried about creeping authoritarianism. Imagine if intercepts of a call between Obama's incoming national security adviser and Iran's foreign minister leaked to the press before the nuclear negotiations began? The howls of indignation would be deafening.

Even before he took office, Donald Trump had inspired massive leaks by bureaucrats throughout the government. In any given case, the leaks might simply serve the purpose of threatened lifers who are trying to undercut a CEO-style president with no experience and little regard for conventional practices. When Trump announced plans to cut the federal work force (with regrettably large exceptions for defense-related and other personnel), the legacy media, itself an adjunct of the deep state in many ways, responded with tales of anxious and heroic government workers who might have to pound the pavement looking for new jobs.

But in the aggregate, the leaks inspired by Trump taking office serve the useful function of making visible the deep state and the permanent government in Washington that persists regardless of which party holds the White House and Congress. On the surface, that's demoralizing to those of us who are interested in shrinking the size, scope, and spending of government. It's the old "you can't fight City Hall" line extrapolated to the nth degree. Trump will almost certainly gain fuller control of government agencies once he purges Obama loyalists and folks interested in crippling his administration's ability to set its own agenda. But in the meantime, the "unprecedented" volume of leaks serve an ironic function against the people making them: They show the extent to which bureaucrats are dug in and willing to go to almost any length to maintain a status quo that is plainly not working not working for taxpayers and citizens. The government is deeply in debt due to persistent, high levels of spending, foreign policy in the 21st century has simply lurched from disaster to the next, the intel community has been exposed repeatedly for unauthorized and unaccountable surveillance, and more. Donald Trump's agenda, which veers clearly towards authoritarianism and paranoid secrecy in many ways, is forcing the deep state to make itself visible, which is a necessary (though not sufficient) step in cutting it down to size.