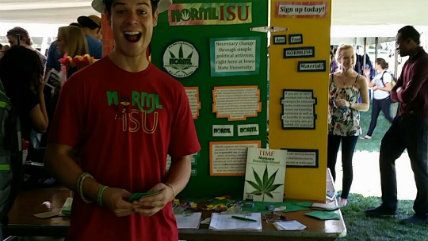 A win for free-speech and marijuana-decriminalization advocates from the U.S. Court of Appeals for the Eighth Circuit. On Monday, a three-judge panel ruled in favor the student chapter of National Organization for the Reform of Marijuana Laws (NORML) at Iowa State University (ISU), which had been banned from using ISU trademarks on much of its promotional material after drug prohibitionists in state politics complained.

ISU generally grants student groups the right to use ISU insignia, logos, and other trademarks (such as the words "ISU" and "Iowa State") on promotional materials, under certain broad conditions. Decisions are made by the school's Trademark Licensing Office. When NORML ISU first formed, in 2012, group members submitted a request for approval of a t-shirt saying "Freedom is NORML at ISU" with a small cannabis leaf above the slogan, and the Trademark Office initially approved it.

Soon thereafter, the Des Moines Register ran an article about marijuana legalization in which ISU student Josh Montgomery, then president of the school's NORML chapter, mentioned that ISU was supportive of his organization's efforts and had even approved the aforementioned t-shirt. On the day the Register article ran, the Iowa House Republicans Caucus sent a formal letter to ISU leadership asking whether they had actually approved the NORML t-shirt. By the end of the day, ISU President Steven Leath and his top staff were emailing one another to discuss whether the school could revoke approval of the NORML design.

The next day, a representative from the Iowa Governor's Office of Drug Control Policy personally contacted ISU administrators to voice concern with their t-shirt approval policies.

A few days after that, NORML ISU requested permission from the Trademark Office to use the same t-shirt design for another batch of shirts. This time, their request was placed on hold pending an upcoming ISU President's cabinet meeting. Thereafter, the ISU Trademark Office informed NORML students that it could not approve the use of any ISU trademarks in conjunction with any design featuring a cannabis leaf. It also said the group must clear all future designs with Student Affairs leadership before submitting them to the Trademark Office.

In response, two members of the student group filed a lawsuit against their university, alleging violations of their First Amendment rights. The U.S. District Court for the Southern District of Iowa initially ruled in favor of the students, prompting the university to appeal.

On Monday, the appeals court affirmed the district court's ruling, concluding that students' "attempts to obtain approval to use ISU's trademarks on NORML ISU's merchandise amounted to constitutionally protected speech." And state schools cannot discriminate against constitutionally protected speech on the basis of its viewpoint without proving that this restriction serves a compelling governmental interest and is narrowly tailored to serve that interest.

In this case, Iowa State's rejection of NORML ISU designs did discriminate based on viewpoint, the court found, and this discrimination was based on "political pushback." Therefore, "the district court did not err by concluding that [ISU] violated plaintiffs' First Amendment Rights because defendants engaged in viewpoint discrimination and did not argue that their administration of the trademark licensing program was narrowly tailored to satisfy a compelling governmental interest."