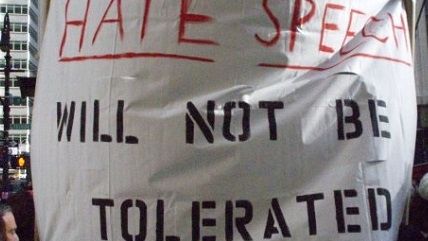 It's great to see that leftists and millennials and others are snapping up George Orwell's Nineteen Eighty-Four in a bid to make some sense of Trump's presidency. Because when they get deep into this dystopian tale—into the Newspeaking, sex-fearing, history-rewriting meat of it—they might realize that it describes their authoritarianism better than Trump's. I can picture their faces now: "Guys… is this novel about us?"

The book shot to the top of Amazon's bestseller list after Kellyanne Conway used the phrase "alternative facts" to describe the Trump administration's belief that the crowds at his inauguration were larger than the media had let on. People pointed out that "alternative facts" sounds creepily like something the Party in Orwell's story would say. Trump seems to believe he can fashion facts from thin air, to boost his own political standing.

"Alternative facts is a George Orwell phrase," said Washington Post reporter Karen Tumulty. MSNBC correspondent Joy Reid tweeted the following lines from the novel: "The Party told you to reject the evidence of your eyes and ears. It was their final, most essential command." Within hours Nineteen Eighty-Four was a bestseller again, people buying it as a map to the liberty-challenging Trump era.

But the novel is a better guide to what preceded Trump, to the nannying, nudging, speech-policing, sex-panicking, P.C. culture that Trumpism is in some ways a reaction against.

Consider the Junior Anti-Sex League, the prudish youths in Orwell's story who think the "sex impulse" is dangerous and devote themselves to spying on interactions between the sexes. "Eroticism was the enemy," they believed. "Desire was thoughtcrime." If this prissiness finds its echo in anyone today, it isn't in the creepily oversexed, pussy-grabbing Trump—it's in the stiff buzz-killers of the campus feminist movement.

These radical wallflowers demonize drunk sex, bossily insisting all sexual interactions must be "sober, imaginative, enthusiastic, creative, wanted, informed, mutual and honest." (Even the Junior Anti-Sex League didn't come up with such a thorough list of what counts as acceptable sex.) They drag male students to campus kangaroo courts for allegedly doing sex the wrong way. Student officials in Britain have banned the making of "animal noises" in the student bar lest they arouse sexual bravado in men, and sexual dread in women.

Fortunately, it is curable. Some universities make freshmen undergo diversity training, inculcating them with the correct mindset on all matters racial, religious, and social. The University of Delaware, going full O'Brien, referred to its diversity training as "treatment" for incorrect attitudes. The New York Times reported last year that more and more students think diversity training "smacks of some sort of Communist re-education program." The modern campus, as devoted to treating moral infection as to imparting knowledge, could adopt O'Brien's cry as its slogan: "Shall I tell you why we have brought you here? To cure you!"

And of course there's thoughtcrime. The Party punishes anyone who dares to hold a point of view it disagrees with. Not unlike modern P.C. warriors who will brand you a "denier" if you're not fully eco-conformist and a "misogynist" if you criticize feminism.

Witness the doublespeak of today's leftist lovers of censorship. They create Safe Spaces, they speak of "the right to be comfortable". These are darkly Orwellian euphemisms for censorship. The Party would be proud of these people who have successfully repackaged the expulsion of unpopular views as "safety" and "comfort"; who will use actual threats and force—see the Berkeley stink—to secure students' "safety" against unpleasant ideas. War is Peace, Violence is Safety, Censorship is Comfort.

As to "alternative facts" and the invitation to "reject the evidence of your eyes and ears": that Nineteen Eighty-Four theme applies at least as well to the P.C. set as it does to Trump's hissy fits. Their clinging to patently overblown rape-on-campus stats, and their trashing of anyone who dares question them, suggests a deep devotion to alternative realities.

And how about Newspeak, the Party's made-up, minimalist language that it pressures people to adopt? That finds expression today in the Pronoun Police, who demonize the use of "he" and "she" as potentially transphobic and invent Newspeak pronouns in their stead. Some campuses now want everyone to use "ze" as a default pronoun. "Ze" might be the most Newspeak word ever: a strange small word you must use if you want to be considered morally good.

Then there is the war on history, the demolition of ugly or inconvenient historical ideas and symbols. In Nineteen Eighty-Four, old things that have fallen out of favor are plunged down the memory hole. Today, P.C. zealots demand the tearing down of statues of old colonialists or the renaming of university halls that are named after people from the past who—shock, horror—had different values to ours. The Year Zero fervor of Orwell's Party is mirrored now in the behaviour of intolerant culture warriors.

Trump will be authoritarian, that's for sure. But his is likely to be a clumsy authoritarianism, oafish rather than Orwellian. In Nineteen Eighty-Four, leftists and millennials won't find a dystopian, fictionalized version of Trumpism—they'll find themselves. In the Party, in the treatment of ideas as disorders, in the Two Minutes Hate against those who are offensive or different, in the hounding of unpopular opinions, in the memory-holing of difficult things, they will see their own tragic creed reflected back to them. They will find a stinging rebuke from history of their own embrace of the sexless, joyless, ban-happy urge to control almost every area of individual thought and life. I hope they heed to this rebuke, and change.