Movie Review: War on Everyone

Michael Peña and Alexander Skarsgård on a mission to give cops a very bad name. 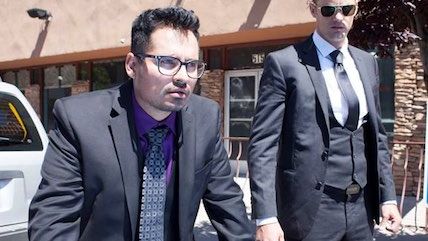 The movie begins with a man in white-face makeup—a mime—running down a road. Some ways behind him, but catching up fast, is a car with two plain-clothes detectives in it, Terry Monroe (Alexander Skarsgård) and Bob Bolaño (Michael Peña). As the cops bear down on their quarry, Bob turns to Terry and says, "You know, I always wondered: if you hit a mime, does he make a sound?"

And bang, zoom—we're off. War on Everyone, the latest film by Irish writer-director John Michael McDonagh (The Guard), is a buddy-cop movie that's been dropped on its head. The picture motors along on a rush of reprehensible trash talk—rude cracks about the Nation of Islam and the heartbreak of dyslexia ("It used to be called stupidity," Bob says), and insensitive observations about drag queens and even a callous aside about the pugilistic abilities of Stephen Hawking. A table full of Japanese businessmen doesn't escape unscathed, either.

Terry and Bob are frankly, even joyously corrupt. Terry cruises the streets with beer in hand, squeezing into tiny parking spots with no regard for the fenders of other vehicles. And when he and Bob nab one suspect, they wind up doing coke with him in a toilet stall, collapsing in giggles each time they remember they actually are cops. (Peña and Skarsgård appear to be having a ton of fun in this picture, with Peña, especially, revealing himself to be a virtuoso of scabrous invective.)

The story, which is not overly tight in its wrapping, concerns a robbery that has netted its perpetrators nearly a million dollars. Terry and Bob want this money, and their quest for it leads them through a pack of nutty characters, including a snotty English lord (Theo James) and his weird intersexual flunky (Caleb Landry Jones), a hopelessly low-level crook (Malcolm Barrett), and assorted lucha libre wrestlers and burqa-wearing tennis ladies. Also yapping at the boys' heels is their exasperated boss, Lieutenant Stanton (Paul Reiser), but what can he do about these guys (or about all the old Glen Campbell hits mysteriously adorning the movie's soundtrack)?

The only thing remotely real-ish about Terry and Bob's relationship is the affection they clearly feel for one another, despite their radically different off-the-job lifestyles. Bob is a dad with two dim-bulb kids, but also a cool wife (Stephanie Sigman) who's completely down with his larcenous ways. Terry, on the other hand—a pretty dim bulb himself—lives alone in a big luxe bachelor pad filled with… well, mainly filled with a sofa and a TV. But then a sharp little woman named Jackie (Tessa Thompson) enters Terry's life, bringing with her a touch of class, or something sort of like it. (Discussing a previous boyfriend, she tells Terry, "He wrote a well-regarded monograph on Andre Breton. He had a nice dick, too.")

On the trail of the money they covet, and a pair of round-trip tickets to Iceland (don't ask), the two partners spill much blood in the course of causing many injuries. (Squinting in exasperation at one particularly noisy victim, Bob says, "Can we play a little game of shut-the-fuck-up?") But there's no not liking these guys, even as the pain and property damage mount. After all, Bob's operating philosophy has been clear from the beginning. "If it ain't broke," he says, "break it."