If You Disapprove of Trump's Refugee/Travel Ban, You're in the Minority 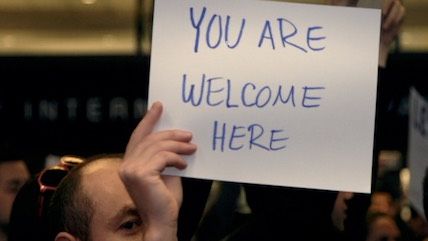 A poll of 1,200 Americans over the past two days finds that a plurality of Americans—49 percent—approve "strongly" or "somewhat" of Donald Trump's ban on all refugees and travelers from seven majority-Muslim countries. Just 41 percent oppose the action, part of which the administration has already walked back.

According to Reuters, the split runs tightly along partisan lines, with 51 percent of Republicans strongly agreeing with the executive order and 53 percent of Democrats strongly disagreeing. And how's this for feels?

More results, and discussion of methodology, are here.

The executive order, which went into effect on Saturday at midnight, provoked demonstrations around the country and, as Reuters notes, a dozen states are looking into files lawsuits against it. Additionally, the acting attorney general was fired after stating she wouldn't enforce the law.

In Congress, most Democrats have spoken out against the ban; they've been joined by 40 or more Republicans. That number is likely to go down if and when more people watch this awful video (courtesy of Fox News) of Nancy Pelosi and Charles Schumer working a crowd to sing "This Land Is Your Land" and attempting to show "the real people" affected by the ban.

Well, that was awkward… Pelosi, Schumer lead a protest against President Trump, and it doesn't quite go as planned pic.twitter.com/gf5JiKoCxT

This is one of those moments when I'd rather be right than popular. Trump's order is based on hysteria and panders to the worst sort of xenophobia at work in the dark night of the American psyche. As important, it hurts our efforts in fighting Islamic terrorism by alienating allies in the Middle East.