Prediction: Donald Trump Will Take Full Credit for Decrease in Illegal Immigrants That Started in 2007

He's already done the same thing with various other things, so why not his pet obsession? 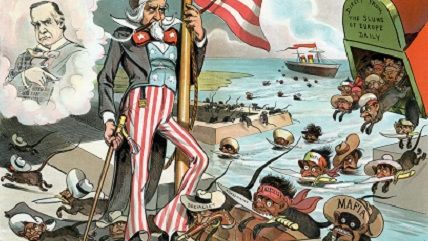 Nothing was more central to Donald Trump's presidential campaign than his promise to deport illegal immigrants and build a wall on the border between Mexico and the United States.

Lest we forget, that's what he opened his candidacy with, a litany of the supposed hordes of drug-carrying, disease-ridden rapists scuttering onto our pristine shores like…well, exactly like the Italian immigrants who came "direct from the slums of Europe" in the late 19th and early 20th centuries. See image to the right, from the horrid old nativist mag, Judge. The Italians even kind of look like Mexicans, don't they? Mustaches, guns, knives, rats! The only real difference was that there were effectively no limits on immigration from Europe or Mexico until the 1920s (Asia was a different story, sadly), so the category of illegal immigrant didn't really exist.

But here's the thing: Illegal immigrants in the United States peaked in 2007 at 12.2 million and has since declined to around 11 million. The main reason for that isn't because of tougher sanctions against illegals—though there's no question that Barack Obama was indeed the "deporter in chief" and Trump's presidential rival, Hillary Clinton, had nothing but hate in her heart for illegals, depending on the setting—it's because the U.S. economy tanked. Immigrants, whether legal or illegal, come here mostly for economic opportunity. Indeed, that's what the First Lady, Melania Trump, said about why she emigrated from her native Slovenia:

"I wanted to follow my dream to a place where freedom and opportunity were in abundance. So of course, I came here."

Talk about the American Dream! Showing up here, working illegally, gaining citizenship, and then marrying the most nativist president since Teddy Roosevelt or Woodrow Wilson!

Trump is now laying out plans to build a wall and beg for funding from a Republican Congress that mostly seems all too eager to play along on this topic—remember, National Review's Ramesh Ponnuru says that being anti-immigration is a "defining" issue for conservatives now and NR editorialized that Trump was too soft on immigration even though he pledged to deport 12 million illegals. Whether the wall ever gets built (or finished, as we've already got hundreds of miles of it in place), the president will be able to take credit for the slowdown that's already years old. The number of illegals in the workforce peaked in 2007 and has also declined. Nothing is smarter than a politician who takes credit for trends that are already in place and Donald Trump is nothing if not a brilliant politician (seriously, people who think he's a dummy or mentally ill fail to recognize his masterful campaign that eked out a victory despite his many negatives). Even more important, given his specific animus against Mexicans, Trump can take credit for reducing their numbers, which peaked in 2009 at about 6.2 million and has been dropping since (the Mexican economy offers them relatively better opportunities these days). Illegals are more likely to come from India, China, and other parts of Asia these days from Mexico.

This wouldn't be the first time that Trump takes credit for something that he had nothing to do with. Back in November, recall, he took credit for saving a Ford plant that wasn't closing. In December, he took credit for creating 50,000 jobs at Sprint that had already been announced and apparently had nothing to do with him. Get ready for him to start defining victory downwards, too. The U.S. economy has limped along at around 2 percent growth for years before bumping up a bit in 2016 and the latest CBO estimates suggest 2 percent for years to come. It won't be long before Trump starts taking credit for growth, however anemic it is.

File all that under smart politics—and utter horseshit.