The new warning would tell customers that tattoos can disqualify them from a military career. 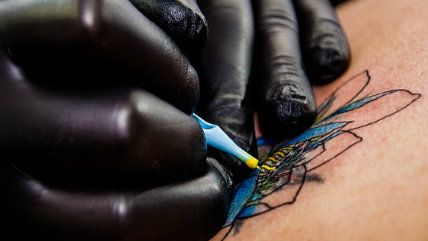 Tattoo artists in Georgia may have to include an additional warning on their consent forms if state legislators get their way. According to the Atlanta-Journal Constitution, lawmakers have introduced a bill, H.B. 123, that would make it mandatory for tattoo parlors to provide written notice that getting certain tattoos could make a person ineligible for military service. The language would read, "Warning: You will likely be disqualified from joining the military if you have a tattoo on your face, neck, forearm, hand, wrist, or lower leg."

Rep. Sandra Scott (D–Rex) is the main sponsor, having previously introduced a similar bill that was passed by the House but later tabled by the Senate. It's unclear whether she realizes that the military has updated its tattoo policies to be more lenient in recent years.

The Army no longer limits the size or number of tattoos that soldiers can have on their arms or legs, though it does maintain a prohibition on face, neck, and hand tattoos (with the exception of one ring tattoo per hand). The Air Force similarly prohibits tattoos on the head, neck, and face, but allows for authorized tattoos on the chest, back, arms, and legs (contra the proposed warning) with no size or area limitations. The Navy has the most lenient policy: Sailors are permitted to have multiple tattoos of any size as long as they're below the elbow or knee, including on the wrist and hand. They may also have one neck tattoo, though it can't exceed an inch in length. The Marines have a stricter policy, but even they allow for an unlimited number of tattoos on any area of the body that can be covered by a properly fitted standard physical training uniform.

Cultural attitudes about tattoos in the U.S. have been changing over time. A 2014 Fox News poll found that 20 percent of voters have at least one, while 14 percent have two or more. Not surprisingly, the poll also found that younger Americans are more likely to have a tattoo and view them more favorably than older generations. Even more telling is that 73 percent of voters say they'd hire someone even if he or she had a visible tattoo.

Why, then, do Georgia legislators feel the need to warn people—all people, regardless of their interest in or qualifications for military service—that their ability to sign up is in jeopardy if they get ink?

Of course, regulatory interference is no stranger to the tattoo industry. As Damon Root noted in Reason's June 2016 cover story, "Tattoos vs. the State": "Over the past half-century, tattoo artists have been subjected to all manner of overreaching, ill-fitting, and just plain nonsensical government controls. They've been hassled by clueless health departments, shut down by moralizing zoning boards, and outlawed entirely by busybody city councils and state legislatures."

Rep. Scott did not respond to a request for comment on this story.