Report Downgrades Quality of American Democracy, But Trump's Election Is Just a Symptom

Populism is a result of government's separation from its citizens over decades. 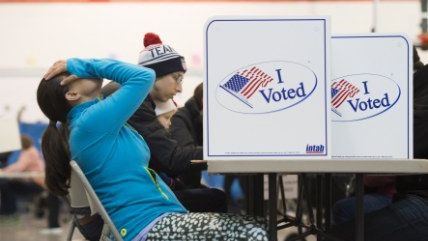 "U.S. no longer considered 'full democracy,' group says" is how The Hill is headlining a new report by the Economist Intelligence Unit. This newly released study, by the analysis and research wing of The Economist, is getting much more media attention than previous editions (they've been doing this for nine years) because of the election of populist Donald Trump and because America has sunk, barely, below the score threshold they use to classify a "full democracy" to a "flawed democracy."

Let's be very clear, though: The report is not "punishing" the United States with a downgrade because it elected Trump (though titling the report "Revenge of the 'deplorables'" is obviously intended to link the two—and it seems to be working). The report takes great pains to explain how Trump's rise was a long time coming and it points not a few fingers at the entrenched political establishment. The reason America's democracy has dropped a rank is because its citizens have lost trust in government institutions and no longer feel as though the political parties represent their interests. And so America also sees less political participation by voters.

Of the five categories the report uses to categorize strength of democracies, America has dropped below the eight out of 10 threshold in two of them: "Functioning of government" and "political participation." Here's how the report views the factors that have helped drive an increase in populist political movements (not just in the United States but in the United Kingdom as well):

The decline in party membership accelerated in the 1990s and 2000s, and while the traditional political parties remain in place today, they are so disconnected from wider society that they bear no relation to their forebears of the 1950s. Parties of the left (social-democratic, socialist, communist) and the right (Christian-democratic, conservative), which dominated the post-war body politic, have lost touch with their traditional supporters and, as a consequence, have lost votes and influence. As they lost touch with their former social constituencies, political parties became closer to the state; they moved to the centre ground to try to widen their support base. Gradually the world view of party and political elites began to develop in contradistinction to, and in opposition to, that of the voters they had increasingly neglected and left behind.

The revolt against the elites has been driven by economic and social factors, but it is also a consequence of the shift over the past few decades of the mainstream parties towards the centre ground of technocratic politics. There has been a growing estrangement of political parties from the electorate, as well as a growing gulf in the values held by political elites and ordinary people. More than anything, the 2016 events were a reaction against the way in which political elites have been conducting politics—by keeping the electorate at arm's length, by avoiding the issues that are important to people, and by presuming that everyone shares their moral values. The 2016 revolt demonstrated that vast swathes of the electorate do not share those values and have had enough of being ignored.

The economic shifts that came as a result of deindustrialization and the de-emphasis on manufacturing have contributed to income inequality within the United States (It's possible to acknowledge this reality without having to embrace more government intervention in wages as a solution). Again the report understands that the decline of manufacturing as part of our jobs base has actually been happening for a very long time. It's not pretending this is a new thing. But the persistence of its impact on some sectors of American society is affecting the financial and health status of a good chunk of the population, even if statistics show that we're all better off than we've ever been. The report notes in fairly stark terms the mortality trends among poor, less-educated whites in America:

In middle age, poorly educated American whites are dying at such a high rate that they are driving up the average death rate for all middle-aged white Americans. The death rate for whites aged 45-54 with no more than a high-school education increased by 134 deaths per 100,000 people between 1999 and 2014. According to the study, the catastrophe for uneducated, middle-aged white males had only one parallel in a modern peacetime setting: the impact of HIV/AIDS on the gay community.

An interesting detail in the report. The United Kingdom had its own populist movement that ultimately voted in favor of the Brexit—the decision to leave the European Union. That the U.K. had a vote to decide whether to remain or leave increased electoral participation and therefore caused its democracy score to improve, counter to prevailing trends.

It's worth mentioning that vote because it's a reminder that when the Brexit vote went against the outcome desired by a good chunk of the establishment, there was a debate over whether the public should have even been allowed to vote on the matter. It's an excellent example of how this political rift has played out in the real world: "The public might not vote how we want them to, so let's think about whether we should let them vote!" But these are the same types of people who are going skim over the reporting of this study and also conclude that Trump is somehow the threat to democracy that is bringing America's score down and ignore their own contributions.

Populism very obviously has the potential to lead to increased authoritarianism. It's an established but unfortunate paradox that people tend to respond to failing government systems by demanding that they do even more and for government to get even larger. It is nevertheless important to separate that likelihood out from the citizenry's demand for control and responsiveness from their own political systems. Technocratic rule can lead to authoritarianism as well, and that's what we've seen under President Barack Obama, not to mention the income inequality that comes from government spending its money on itself and not its constituents. Technocratic rule turns its nose up at school choice, despite its popularity among parents, because the "right people" no longer have as much control over what children learn. Focusing too much on a "mob rule" vs. "elite rule" axis potentially ignores the possibility of "self rule."

All of this analysis highlights that it's important to soberly look at what policies are coming out of the Trump administration and whether they advance human liberty or threaten it, and that makes him no different from any previous president. Encouraging Trump's deregulation efforts is an easy choice because it will not only help reduce income inequality in depressed areas by dropping the costs of doing business, it could also increase the perception that the government is responding to the needs of its citizenry not its bureaucrats. Discouraging Trump's trade protectionism is an easy choice for the same reason—it will not make lives better for Americans, it will cost jobs, and it will drive up prices for goods purchased by the very people Trump is claiming to try to help.

And while there is a lot of analysis connected to Trump's policy proposals (to the best that we can discern them) there's also a lot of "pants on fire journalism" (for lack of a better term) in response to every single thing that's happening, such as top officials over at the State Department quitting. Or that Trump didn't wave before getting on a plane.

The full report can be downloaded here. Note that you have to register with the site in order to get access, but it's free.