Lenore Skenazy | From the February 2017 issue 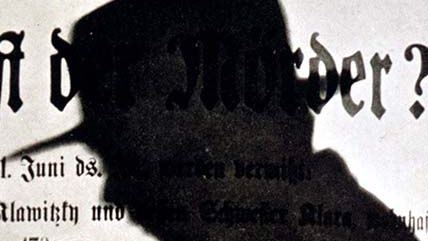 A mother is puttering in the kitchen, waiting for her daughter to come home from school. We see the clock on the wall. We see her expression grow from cheer to terror. And somewhere in the streets below, we see a man buy a little girl a balloon.

If your pulse is racing already, thank Fritz Lang, director of M, the 1931 picture that taught filmmakers everywhere to hook audiences with the primal emotion of heart-stopping fear for our kids.

"The majority of child abduction movies suggest that a child can disappear if you look away for a moment," says Pat Gill, professor emeritus of communications at the University of Illinois. It's a lesson audiences have so taken to heart that I once heard from a mom who'd been reading a book on her lawn while her children frolicked around her. A woman passing by screamed, "Put down that book! Don't you realize your kids could be snatched at any moment?"

That is society's mantra, repeated by cops and child protection officials as they arrest parents for letting their kids wait briefly in the car. And a small handful of movies may be responsible for it.

There's Adam and Adam: His Song Continues, two films about real-life abducted child Adam Walsh. There's Taken, the first of the franchise starring Liam Neeson. And there's Room, the bleak independent picture about a kidnapped teen who has a child by her abductor and then raises that child in captivity.

But M is the picture that started it all. After bad guy Peter Lorre murders the girl he bought the balloon for—all off camera, so viewers can imagine the worst—the city rises up to hunt him down.

He nonetheless manages to befriend another child on the street. But just as he's leading the happy little girl off to buy candy and a toy, her mother appears. Though the child normally walks home by herself, today mom decided to meet her halfway. Hallelujah!

And that, in fact, is the moral of the story: Unless you want your children to get murdered, you simply cannot let them be outside on their own. Lang himself said he made the movie "to warn mothers about neglecting children."

"It almost feels like those hygiene films that warned you to brush your teeth," says Robert Thompson, a professor of pop culture at Syracuse University. "That's what I think Adam did as well."

Adam is the made-for-TV picture that came out two years after the 6-year-old's abduction from a Florida department store in 1981. Even more than M (which was, after all, German), it's the movie that branded stranger danger onto the collective American brain.

Until then, says Gill, the majority of child abduction movies were either police procedurals or family melodramas. "In some way, the child is an abstraction—the 'time-is-ticking-away' prompt. You often don't see the child at all, or if you do, it's got some gangster's moll taking care of the kid. He's not tied up or anything."

But Adam changed all that. "There was a Greek-tragedy quality to it," Thompson says, "because by the time that movie came out, we all knew how it ended." (The child was beheaded.)

The two-part mini-series broke all records, and the media world began ordering more kiddie kidnappings, on the double. It also introduced the five little words that would change TV forever: "based on a true story."

Tales ripped from the headlines are pre-sold to the public, which is a great business model. ("The news cycle does the marketing for free," Thompson explains.) That's why we've gotten flicks about everyone from teenage abductee Elizabeth Smart to toddler murder victim JonBenét Ramsey to Amber Hagerman, for whom the Amber Alerts are named. Not to mention all those Law & Order: Special Victims Unit episodes that swirl together true crime and Hollywood horror.

In the 1986 sequel Adam: His Song Continues, we witness the birth of the modern-day abduction-obsessed nation, as Adam's dad crisscrosses the country, testifying about all the children being kidnapped and killed. He even visits a dairy and convinces the owner to put missing kids' pictures on milk cartons. The film doesn't mention that the vast majority of such children are taken in custodial disputes or simply run away.

In the movie's opening scene, a kid on a bike throws a newspaper onto the Walshes' porch. It's meant to be prosaic. But in another decade or two, there will be very few newspaper boys left—not because they've been kidnapped, but because of the fear sown by this film.

Neeson's daughter sees the men grab her friend in the next room and dials daddy—a Special Ops type—for advice. Matter-of-factly he tells her, "You will be taken."

So will you, dear viewer, on what is basically an excuse for vigilante sadism as Neeson hightails it to Paris. Without a hint of jetlag, he takes on an international team of traffickers, allowing the audience to enjoy all sorts of cruelty—think bad guys getting electrocuted—while feeling morally superior, since it's being done in the name of stopping something evil. It's virtue signaling, with popcorn.

And it gave parents something else to be terrified of. A mom at a PTA meeting once solemnly informed me that there are more girls sex trafficked in America today than there were slaves before the Civil War.

Sex trafficking happens. But in reality, not all human trafficking involves sex and not all sex work involves coercion. When a woman billed as a "sex trafficking victim" took the podium at the 2016 Democratic National Convention, she turned out to have been forced into unpaid housework, not prostitution. But there is no Liam Neeson franchise about maids.

Room, by comparison, is a Serious Film. We know this because the lead actress, Brie Larson, won an Academy Award for playing the mom who raises a son within the confines of a backyard shed. Her fictional character was taken at age 17 when she was kind enough to help a man who said he'd lost his dog.

In all these pictures, a mom is overtly or subtly at fault: The mother in M, who didn't escort her child home from school. The mother in Adam, who didn't keep her son by her side at Sears. And the mother in Taken, who sends her daughter to Europe unchaperoned. Even the one movie that shows us the world's greatest mom, Room, depicts Larson yelling at her own mother because maybe if she'd taught her to be a little less nice to strangers, she wouldn't have been snatched.

The movie industry has realized what newspaper editors, cable TV producers, and grandstanding politicians already know: There's no business like woe business, and most woeful of all are stories about missing children whose mothers could have saved them.

M concludes with a lesson: "One has to keep closer watch over the children." But how much closer can we watch?