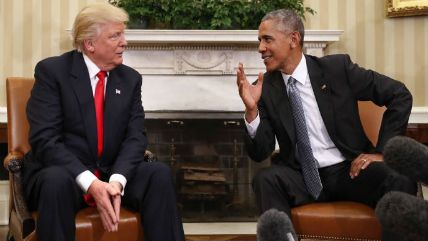 Rise and shine! The United States presidency is transferring from Barack Hussein Obama to Donald John Trump today sometime after 11:30 a.m. ET, and there are many things to say and ponder about this shift in American power. As fate would have it, I and my froggy voice will be yakking about Inauguration Day for THREE LONG HOURS, from 9-12, as guest host for the Stand UP! with Pete Dominick program on SiriusXM's Insight channel, which is 121 on your channel-finder thingie. Please call in any time at 1-877-974-7487, to talk about your drinking strategies for the day, where you are on the bummed/stoked/meh/Zen scale, and what your mind conjures up when people utter the phrase "peaceful transition of power."

I will, very thankfully, not be alone. In addition to Dominick's crack staff, the host himself will attempt to call in from time to time whilst gamboling on the National Mall. Other guests will include:

* That's right, New York magazine political writer Jonathan Chait, author of Audacity: How Barack Obama Defied His Critics and Created a Legacy That Will Prevail, to talk about the exiting president. (For those itching for more explict Chait-combat, this link will prove more satisfactory.)

* Historian Kenneth C. Davis, author of Don't Know Much About History: Everything You Need to Know About American History but Never Learned.