If the bureaucratic hurdles can be jumped, a real seastead could be floating in French Polynesian water in 2018. 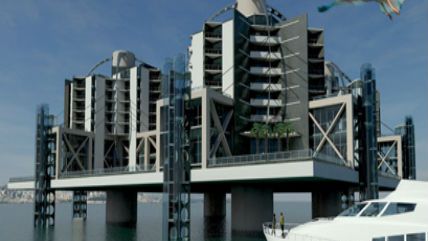 The Seasteading Institute, dedicated to promoting the creation of new political entities floating in the open ocean, tonight held a ceremony in which it publicly signed a long-in-the-works "memorandum of understanding" with the government of French Polynesia. The agreement is meant to pave the way to the creation of an actual functioning seastead in French Polynesian water, under a yet-to-be-determined special set of rules.

At the signing ceremony in San Francisco, Jean Christophe Bissou, the top spokesperson for French Polynesia's President Edouard Fritch, will be publicly signing that memorandum with representatives of the Seasteading Institute. (Fritch was originally scheduled to appear and sign himself, but had to delay at the last minute, having to deal with the unexpected resignations of two cabinet ministers.)

The memorandum is more an agreement to come to an agreement than setting any specifics in stone. The French Polynesian government sets forth its reason for wanting to pursue a Seasteading project in its waters in language from a draft of the memorandum in my possession:

And here's where Seasteading comes in:

it will bring new technologies, new research horizons and new economic activities to French Polynesia. The Seasteading Institute's project is an opportunity to develop new living spaces on the sea and offers the possibility of multiplying this type of sustainable habitats in other places. It opens the capability of gaining new living spaces for countries threatened by rising water levels, overpopulation, or other dangerous phenomena.

The agreement "affirm[s] the joint will of the Parties":

to pool their efforts for the implementation of a pilot project for floating islands in French Polynesia. The development of this project involves various studies addressing the technical and legal feasibility of the project in French Polynesia as well as the preparation of the special governing framework allowing the creation of the Floating Island Project located in an innovative special economic zone…..

The Floating Island Project will develop innovative and sustainable floating platforms. It will promote the development of new technologies in the terrestrial Anchor Zone and in the Floating Islands Zone. The Floating Island Project will respect the environmental standards defined by French Polynesia. It will use renewable energies. It will welcome the development of innovative technologies for the protection of the environment. It will not be interested in any land or ocean mineral resource. The platforms aim to attract direct and indirect investments in French Polynesia and host numerous businesses and research projects. The project will allow international experts to collaborate in French Polynesia to develop platforms capable of minimizing the effects of rising sea levels. It will have to have a favorable and significant impact on the local economy with the establishment of a special economic zone that will facilitate the creation and management of companies.

The agreement commits them to finalizing the legal end of the agreement by the end of 2017.

Seasteading's communications director Joe Quirk has a fascinating and convincing book on Seasteading out in March (co-written with Seasteading Institute founder Patri Friedman) in which the ecological and business advantages of using the ocean are frontloaded, just as they are in the agreement with French Polynesia. The competitive governance aspect is still there, but no longer the first foot forward. Whatever seastead happens in French Polynesia will, as above, have a special legal status but not full distinct sovereignty. But if it works it will certainly be a fascinating proof of concept to attract more interest from investors and possible host governments.

Quirk says they were introduced to the French Polynesian government via a former government official and entrepreneur there named Marc Collins. The Polynesians already have a ministry dedicated to the "blue economy," the umbrella term for the type of aquapreneurship the Seasteaders hope to see happening on ocean seasteads.

"Going to Polynesia felt like coming home for a Seasteader," says Quirk, though he'd never been before they went to meet with the government there to begin the negotiations that ended with this agreement. "Polynesians are the original Seasteaders. They have a culture of moving from island to island, getting on those Polynesian canoes and going to a new island and founding a new society. They like the words 'autonomy' and 'choice' and get the idea of discovering new things."

French Polynesia, while they have a great deal of autonomy, are technically, as the name says, French, so the French government will also have to sign off on certain aspects of whatever deal the Seasteaders end up making with the Polynesians, Quirk says. What the Polynesians want most, he says, is "blue jobs, for their youth, and they want to create new maritime industries so their kids can become the entrepreneurs of the future."

The specifics of what business or aquaculture might happen on a prospective Polynesian seastead are not yet set in stone, Quirk says. But he feels confident they mostly understand the bureaucratic path before them, that the physical problems are proven solvable by aqua-architect firms the Seasteaders are in communication with, and while he knows that the unexpected can and will arise, Quirk thinks the physical construction of a Seastead in a Polynesian lagoon could be happening in 2018.

Even before this agreement with French Polynesia was officially signed, the British Guardian was casting a stinkeye at the idea, quoting a Tahitian TV host Alexandre Taliercio saying the Seasteaders, who he writes off as "millionaires," are "lulled by an illusory desire to free themselves from the existing states" and "seem to have much more to gain than we do."

The recently extra-controversial (for his support of and work with the incoming Trump administration) Silicon Valley billionaire financier Peter Thiel was an early funder of the Seasteading Institute, though he is not currently involved. Quirk says that he has no way of knowing now if the frequently inscrutable and unpredictable Thiel will give any future money to help actuate Seasteading in Polynesia or elsewhere. But Quirk does say that actuating the possibilities opening up in French Polynesia and making them a real floating place of business will require the Seasteading Institute to up its fundraising and investor-finding game in 2017.