The Neoliberal Era Is Over

Donald Trump's pro-tariff action yesterday underlines a reality long in the making: The post-Cold War neoliberal triumphalism is dead in the West. 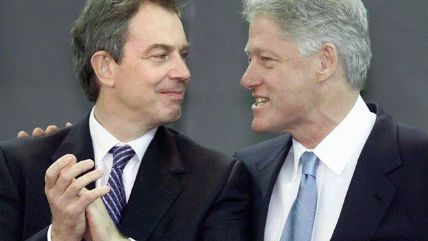 Yesterday brought three bits of trade-related news from President-elect Donald Trump. The first was that he has nominated as the next United States Trade Representative Robert Lighthizer, who has long railed against what he calls "the utopian dreams of free traders." The second was, obviously, a tweet:

And third was the announcement from Ford Motor Co. that it is cancelling a $1.6 billion plant in Mexico while launching a $700 million factory in Michigan, which Ford Chairman Bill Ford Jr. told Trump himself in a phone call.

We've already seen this cycle play out before—five weeks ago, over the span of a few days, the president-elect vowed to enact a 35 percent border tax, slammed an Indiana ball-bearings plant for moving its factory to Mexico, then declared victory after intervening in another manufacturer's siting decision. But coupled with recent political and societal developments in the increasingly morose continent of Europe, this latest bout of Trumpism spray-paints an exclamation point on a 2017 reality many are still slow to acknowledge: The post-Cold War age of ever-increasing trade, immigration, multilateral integration, and technocratic celebrations thereof, is in the rearview mirror. Once-dominant neoliberalism—I'm using the term here as it is deployed these days by its critics, rather than how it was used by its more domestically inclined originators—is on life support in the democratic West. And this deterioration long predates Donald Trump.

Start with trade. After the destruction of World War II and the post-war European incursions by the Soviet Union, tariff reductions and free-trade zones have been understood in Paris, Bonn, London, and Washington as the best available tool to cement peace and stave off authoritarianism. American presidents from both major political parties—sporadic rhetorical spasms notwithstanding—have without exception assumed their role as the world's lead trade negotiator. Dwight Eisenhower, in the teeth of the Cold War, bucked nearly a century of Republican protectionism. Bill Clinton and Al Gore, after the collapse of communism, shouted down giant sucking sounds from all over the political spectrum. Even Barack Obama, who campaigned more vociferously against trade pacts than any postwar president, predictably reneged on his promise to renegotiate the North American Free Trade Agreement (NAFTA), and appointed as his second-term Trade Representative a guy whose resume—Council on Foreign Relations, Citigroup, chief of staff in Robert Rubin's Treasury Department—couldn't be more neoliberal if it was cooked up in a laboratory.

Compare that to the mercantilist economic views of Trump's pick, as expressed in a 2008 New York Times op-ed headlined "Grand Old Protectionists":

Modern free traders […] embrace their ideal with a passion that makes Robespierre seem prudent. They allow no room for practicality, nuance or flexibility. They embrace unbridled free trade, even as it helps China become a superpower. They see only bright lines, even when it means bowing to the whims of anti-American bureaucrats at the World Trade Organization. They oppose any trade limitations, even if we must depend on foreign countries to feed ourselves or equip our military. They see nothing but dogma—no matter how many jobs are lost, how high the trade deficit rises or how low the dollar falls.

While the Trump administration's pivot on trade will feel abrupt, the politics behind it have been percolating for more than a decade. Free-trade Democrats, once a common sight on Capitol Hill, became all but extinct after the party re-took Congress in 2006 on a more economically populist platform. Hillary Clinton twice ran for president by campaigning against her husband's trade deals (even while bragging on his economic successes), yet in both instances found herself yanked sharply to the left by competitors who successfully questioned her sincerity. Bernie Sanders, a democratic socialist and longtime independent, received more than 13 million votes in the Democratic presidential primary, in part by claiming—ludicrously!—that international trade is a "global race to the bottom."

Meanwhile, Republicans haven't been as pro-trade as you might think. Two of the GOP's top four presidential finishers in both 2008 and 2012 campaigned against free-trade agreements—Ron Paul over issues of sovereignty and crony capitalism, Mike Huckabee and Rick Santorum for reasons that would soon be echoed by Trump. The president-elect may be jerking public opinion toward his P.O.V., but even before Inauguration Day, 70 percent of conservatives support "imposing stiff tariffs or other taxes on U.S. companies that relocate jobs." Free trade right now just ain't popular.

The same is true in Europe, as pro-trade Euroskeptics such as Daniel Hannan are coming to find out in a post-Brexit universe. While Brits have surely reclaimed sovereignty by swapping Eurocrats for homegrown busybodies, it may take as long as a decade to negotiate a new trade deal just with the European Union, let alone stitch together scores of other new bilateral pacts. And there's no indication that voters who rejected Brussels will turn around and support reductions in tariffs with other foreign capitals. As Johan Norberg pointed out in these pages back in July, the pro-Brexit leadership sounded some downright Trumpian notes about state intervention into markets:

[L]eading free-market Tories Boris Johnson and Michael Gove drove around in a campaign bus emblazoned with the message that government health care will get another £350 million a week outside of the E.U. The Leave campaign also promised more tax money to universities, scientists, and distressed regions.

When a steel plant in Wales foundered, Boris Johnson abandoned all free-market pretense and explained that the problem is that the E.U. stops the British government from introducing tariffs: "When we want to change tack on tariffs, we can't—because we have given up control." Gove complained that the E.U. has "rules that prevent us providing that emergency support and assistance" and that after Brexit "we would be able to support industries that were going through difficult times."

Railing against the sovereignty-busting whims of overseas elites isn't just effective politics, it's also often right. The E.U. project has been liberating when it comes to free trade, privatization, and the movement of humans within its borders, but planners weren't content to stop there. They insisted on eradicating monetary sovereignty as well, implausibly lashing together the central banks of Germany and Greece, a system that leaves all participants perpetually (and rightfully) disgruntled. And the downside to pooling and outsourcing immigration policy has been all too clear these past few years, as locals have found some of their cities swollen with hard-to-assimilate migrants and refugees from war-torn Muslim regions of the Middle East and North Africa, without feeling like they had any say in the matter. Throw in what has become almost monthly acts of deadly Islamic terrorism on the continent, and the nationalist political reactions write themselves.

There is zero juice left in the West for Bill Clinton or Tony Blair-style Third Way politics, nor much for the managerial conservatism of Jacques Chirac and George W. Bush. And yes, the military interventionism that each in their way championed contributed to the discrediting of their ideological brands. As former New Republic owner and editor Marty Peretz reminisced in the Wall Street Journal a few years back, "We were for the Contras in Nicaragua; wary of affirmative action….For military intervention in Bosnia, Rwanda and Darfur; alarmed about the decline of the family. The New Republic was also an early proponent of gay rights. We were neoliberals."

In the post-neoliberal era, parties of the left are going hard democrat-socialist (think Bernie Sanders and Jeremy Corbyn), while parties of the right increasingly adopt the welfare-state nationalism of Donald Trump, Viktor Orban, and France's ever-advancing Le Pen family. The areas around the center are as dead as the political careers of, well, Hillary Clinton and Jeb Bush. Voters everywhere are drifting toward candidates and parties whose incorrectness (as perceived by elites) in manner, policy ideas, and rhetoric offer hope that they, at long last, won't be like all the others. I was struck during a Christmas visit to France at how genuinely intrigued people I spoke to were about Donald Trump, often in a hopeful way. I almost never heard such generous assessments of the likes of George W. Bush.

The potential magnitude of this Transatlantic political realignment is one of the reasons Team Trump has such a spring in its step. For those who are more anxious about the rise in mercantilism and decline of multilateralism, it will do no real good to merely point at the highlight reel of the recent past. That place was more flawed and corrupted than its managers were willing to admit, and in any event is no longer the reality we live in.