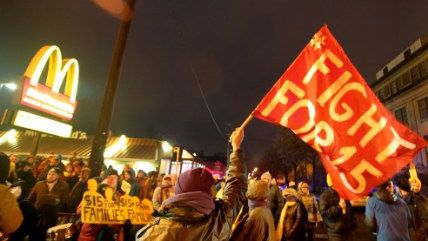 2017 ushered in minimum wage increases in 19 states, some more reasonable than others, and some of which are just the start of a series of massive jumps.

There will undoubtedly be "winners" and "losers" in these government-ordered increases, those who see actual raises vs. those who find jobs harder and harder to come by. And it's going to be a challenge to evaluate what truly happened. We are seeing increased automation of low-level low-skilled service jobs. Jacking up the minimum wage is going to increase the speed by which it happens, but it would be foolish to think it wouldn't eventually come regardless.

Houman Salem, who owns a small fashion house in the San Fernando Valley out in Los Angeles, took to the op-ed pages of the Los Angeles Times to explain why he's packing up and moving out of California. Los Angeles famously decided to eventually jack up its minimum wages to $15 per hour and the entire state followed suit.

Salem's commentary is particularly interesting because he writes about wages as a piece of a larger regulatory burden that affects his ability to do business. He explains that the minimum wage increase is the straw that broke the camel's back because of how difficult California makes it to operate a business:

Here's what the math looks like: I pay my employees $10.50 an hour, plus productivity bonuses. In addition, I pay payroll taxes and one of the highest worker compensation rates in the state. Even still, I could likely absorb a minimum wage as high as $11.50 an hour. But a $15-an-hour wage for my employees translates into $18.90 in costs for me — or just under $40,000 a year per full-time employee.

When the $15 minimum wage is fully phased in, my company would be losing in excess of $200,000 a year (and far more if my workforce grows as anticipated). That may be a drop in the bucket for large corporations, but a small business cannot absorb such losses. I could try to charge more to offset that cost, but my customers —the companies that are looking for someone to produce their clothing line — wouldn't pay it. The result would be layoffs.

The irony here, Salem notes, is that because Nevada's regulatory costs are so much lower than California's, he may actually be able to pay his employees more by moving. Even though Nevada has a lower minimum wage than California, he'd be okay with Nevada raising it, because the overall cost per employee is lower there. (and it's probably also worth noting that the same amount of money goes further in Las Vegas than in Los Angeles, so employees making the same wages are actually wealthier)

Salem's warning is a reminder that many of the states with the highest minimum wages also have the most oppressive regulatory atmospheres to do business. And that's naturally going to wreak havoc on businesses with smaller profit margins—anything retail. (Over contributing to Forbes, Tim Worstall blasts a New York Times editorial calling for a higher national minimum wage for not grasping what a small profit margin even large retailers operate on. Over at the Washington Examiner, Jason Russell slams the same editorial for not grasping that different communities have different costs of living.)

Massachusetts officially has the highest minimum wage in the country right now at $11 an hour. And yes, it's hurting people. From The Boston Globe:

The owner of two family entertainment centers in Massachusetts said she has reduced her staff to 20 people, down from 50, over the past two years, to counteract rising payroll costs.

The employer, who asked not to be named because she feared repercussions from workers' advocates, said she and her husband have cut their hours of operation, replaced their DJ with canned music, and are working more themselves to stay afloat. They have also stopped hiring teenagers in favor of more experienced workers.

Oh, and Massachusetts' labor laws require paying employees time-and-a-half on Sundays. For these left-leaning states where residents declare their hate of big box corporate retailers, they sure do make it hard for anybody else to do business there.

Even in Panem (Washington, D.C.), where there's plenty of people cashing in on federal spending and pork, restaurants are shedding jobs as minimum wage requirements increase.

Sadly, though, I expect a lot of minimum wage coverage to focus on the impacts in urban environments, where wages are naturally higher already. I expect few will notice or care what happens outside big cities in areas that cannot absorb higher costs and prices. Unsurprisingly, those are the areas that voted for Donald Trump.