John Carpenter to Nazis: Dammit, Stop Treating They Live As a Metaphor for The Jews

You can't blame the filmmaker for being annoyed. But audiences are always repurposing art, sometimes in creepy ways, sometimes in ways that are more appealing. 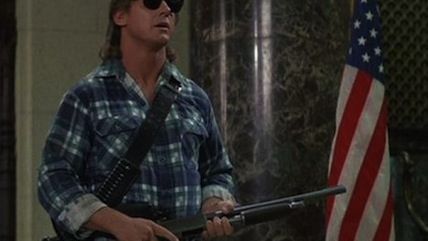 John Carpenter—director of The Thing, Escape from New York, and other entertaining genre flicks—is sick of seeing anti-Semites trying to adopt one of his movies as their own:

THEY LIVE is about yuppies and unrestrained capitalism. It has nothing to do with Jewish control of the world, which is slander and a lie.

They Live, for those of you who haven't seen it, is a science-fiction film from 1988 about a drifter, played by the late Rowdy Roddy Piper, who acquires some sunglasses—"Hoffman lenses"—that let him see the true reality lurking behind the surface world. Ads and other items are revealed to be subliminal commands ("OBEY," "CONSUME," "CONFORM," "STAY ASLEEP"), and many of the people around him are exposed as extraterrestrial impersonators. Turns out those aliens secretly run the world.

As often happens with stories like this (see also: The Matrix), They Live has been embraced by people with their own ideas about just who the hidden rulers of the planet are. It can't be fun to have a bunch of bigots reading their worldview into your work, and I can't object to the Nazi Punks Fuck Off spirit of Carpenter's tweet. But his problem was probably inevitable.

Audiences are constantly adapting texts for their own ends, as any devotee of Kirk/Spock slashfic could tell you. And conspiracy stories are easily restructured to replace one fear with another. Carpenter wants his viewers to resent yuppie capitalists rather than Jews, but viewers sometimes have their own stubborn notions about how they're going to perceive things. (Google "Jewish Capitalism," by the way, and you'll get yourself some bigots who can do both.) Jonathan Lethem's excellent little book about Carpenter's film, also called They Live, pointed out way back in 2010 that an anti-Semitic website had tried to link those "Hoffman lenses" to the Holocaust-denying writer Michael A. Hoffman II. Lethem's conclusion: "setting your open-ended conspiracy metaphors loose upon the world, they become (like anything) eligible for manifold repurposing. Free your mind and an ass may follow."

Or as my colleague Nick Gillespie wrote in the antediluvian days of 1996, when They Live was more likely to be taken as a metaphor for Corporate Rock Still Sucking:

What is on the screen or on the stereo…matters far less than one might suppose. Individuals interpret and reconstruct what they see and hear the way they want to. In a classroom, interpretations can be graded as better or worse, depending on the instructor's criteria. But there is no analogous oversight in the real world and people are free to spin out their own interpretations and cross-references. Reductio ad absurdum: Mark David Chapman read The Catcher in the Rye as legitimizing his murder of John Lennon. Clearly, this is not an A+ interpretation of the novel, but it is an interpretation nonetheless. And it points to a simple truth: The most relevant interpretive context is not the producer's but the consumer's.

Since most of those consumers are not Nazis or assassins, their interpretive freedom has had a lot of fun or thoughtful or just enjoyably strange results, as anyone who's encountered a bunch of fans having an argument could tell you. (Sometimes the fans even use that freedom to make compelling art of their own.) If there are times when the results are offensive or stupid instead—well, that's the price we pay. Better that than a world without creative reinterpretation, where audiences numbly OBEY and CONSUME some Single Correct Meaning of a story.