A majority of both Republicans and Democrats think the Supreme Court should leave Roe alone. 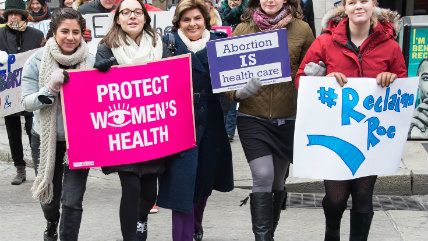 President-elect Donald Trump has promised to appoint Supreme Court justices who will overturn Roe v. Wade, the seminal 1973 case affirming a right to legal abortion across America. If it happens, it won't be a popular move. According to a new poll from the Pew Research Center, less than one-third of Americans think that Roe should be overturned.

In the Pew poll, conducted November 30 through December 5, 2016, just 28 percent of respondents said they hoped the historic ruling would be history, while 69 percent—including a majority of Republicans—said the Supreme Court should leave Roe alone. Among Democrats or Democratic-leaning respondents, 84 percent said they did not want to see Roe overturned, while 53 percent of Republican respondents agreed.

Education was also associated with a divide on Roe, with 35 percent of respondents who had a high-school education or less saying it should be overturned but just 23 percent of those with a college degree and 12 percent of those with a post-graduate degree saying so. And while Catholic and Protestant support for overturning Roe was roughly equal—34 percent and 35 percent, respectively—nearly half of white, evangelical Protestants said they think Roe should be overturned.