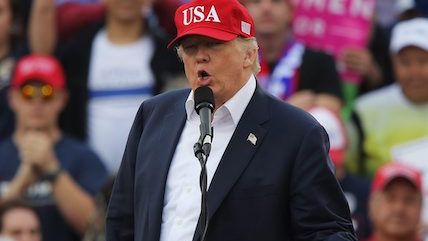 The new year is a time to make resolutions to improve your life over the next 12 months. This time around, there's a new boss in the White House and the Republicans have control of Congress. So though I usually don't feel I can realistically add big sweeping changes to my list—a tactic often likelier to yield failure and frustration than success—I am going to dream a little and call for boldness on top of no-brainer reforms.

— Reform the corporate income tax. It's been a few decades since Congress engaged in real tax reform. As a result, the corporate income tax rate is the highest of all developed nations—35 percent at the federal level alone. We also have a worldwide tax system, which means that if it weren't for an ability to defer paying taxes at the U.S. rate as long as overseas income stays abroad, corporations would be subjected to Uncle Sam's insatiable appetite no matter where they make money.

An easy fix would be to lower the rate as much as possible and move to an origin-based territorial regime—all paid for by cutting spending and reforming entitlements. (I told you I would dare to dream.)

— Repeal the Affordable Care Act. From the "if you like your plan, you can keep it" fiasco to soaring Medicaid costs to exponentially rising premiums, Obamacare needs to go. Friends and foes of the repeal believe that the reconciliation process would be a logical pathway to achieving this goal. After the repeal, Republicans would have an opportunity to replace Obamacare with a plan that is much closer to a real market solution. I certainly hope they would try to use health savings accounts rather than tax credits, which would have a mandate problem and could be described as "Obamacare Light."

Though the health insurance system is important, lawmakers should not overlook another issue that's just as important, if not more so: how to unleash waves of disruptive innovation that can bring health care costs down and increase quality. To foster such change, we need to give health care providers and innovators wide leeway to innovate and experiment. This requires us to loosen the coercive grip of government agencies (Food and Drug Administration, I am thinking of you) and special interests.

Currently, our laws, regulations and institutions constantly get in the way of unleashing the kind of technological revolution that transformed other industries, such as information technology. In his "Fortress and Frontier in American Health Care" and other writings, my colleague Robert Graboyes makes a passionate case for permissionless innovation in health care. Lawmakers should listen to him.

— Deregulate. The burden of regulation on our personal and business lives has made us run sore for decades. Economists have documented how the large accumulation of regulations has serious impact on our economy. Economists John Dawson and John Seater estimated, for instance, that federal regulations from 1949 to 2005 caused the gross domestic product to be $38.8 trillion less in 2011 than it would have been. They figured that this loss amounted to $129,300 per person. Also, the World Bank found that a 10 percent increase in regulatory burden is associated with a loss of half a percentage point in the overall world economic growth rate. That's thousands of dollars in lower income per person.

But things have gotten worse since President Barack Obama took office. As documented by Diane Katz and James Gattuso of the Heritage Foundation, the unparalleled increase in regulatory burdens since 2009 brings the regulatory costs to an astonishing $108 billion a year. Imagine the incredible decline in economic freedom and individual liberty that resulted from this regulation spree.

— Drain the swamp by ending all subsidies to private businesses. Cronyism—the unhealthy marriage between the government and corporations—is the biggest threat to capitalism and free markets. However, it is also very corruptive and explains the lack of trust that people have in our government. Corporations have long used and abused their access to government officials to boost their profits with subsidies, tax breaks, and loans or to exclude their competitors. Such things as the Export-Import Bank of the United States, agricultural subsidies, and the ethanol mandate should be first on the list for Congress and the new president to terminate.