Citizens forced to comply with unconstitutional stops get gift cards. 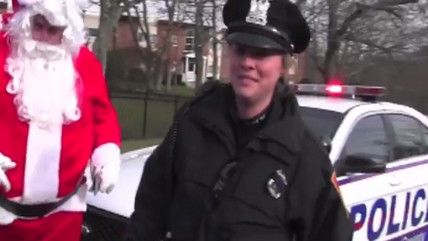 It's that most wonderful time of the year, when police illegally stop drivers so they can hand them gift cards, all recorded on camera for public relations purposes.

The recurring gimmick is meant to show police officers have "heart," and just about all the videos of such stunts show drivers displaying the same hidden camera game show-type reaction, where their tense and concerned face drops in relief and laughter as they realize they've been lovably duped by an armed agent of the state.

Some recent examples include an officer in a Santa outfit handing out candy canes to motorists and their kids in Suffolk County (N.Y.):

In Youngsville (La.), officers have been pulling over drivers and giving them gifts for obeying the rules of the road, which Officer Pedro Alexander says makes him feel good "to know that you're not considered the bad guy around the holidays."

In Sequoyah County (Okla.), one officer was seen on video telling a motorist he was being pulled over for a broken windshield. When the officer came back with gifts, the motorist — who had been video streaming his stop on Facebook — actually did seem appropriately annoyed, asking "Why you got to scare me like that?" Happy pranksters of the law are also pulling these stunts in Michigan, Massachusetts, and Tennessee.

But no one likes being pulled over, it can often be a terrifying experience just seeing those flashing lights in your review mirror. Leaving people alone for obeying the law is the appropriate default posture for law enforcement. If police are seeking good publicity and can't think of anything better to do than to hand out gift cards donated by local businesses, perhaps they should be a little more creative than play-acting some scary scenario that's really just a ruse (frequently done in coordination with obsequious local media outfits) to benefit the police department's image.

If police would not have stopped drivers for these minor violations unless they had gifts to hand out, they are deliberately inconveniencing people and causing them needless anxiety for the sake of a publicity stunt. The distribution of gifts is beneficent on the face of it, but it is a demeaning kind of beneficence given the inherently unequal relationship between a citizen and an armed agent of the state with the power to forcibly detain him.

Some might say this is classic humorless libertarianism playing Grinch to some harmless holiday fun. It doesn't change the fact that the stops are a violation of the Fourth Amendment or that people are understandably jittery when being detained by police.

If police want to improve their image, pulling stunts that initially highlight the fear and dread that often comes with running afoul of a police officer isn't the best long game.