No president can repeal the laws of economics. 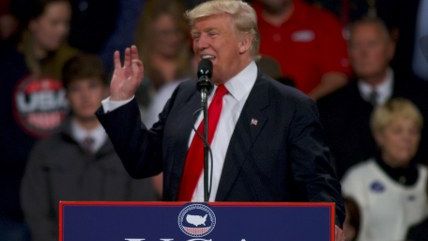 Opposition to free trade was to Donald Trump's campaign what burgers are to McDonald's: not the entire menu but the essence of the brand. His fabled appeal to rural whites and unemployed steelworkers arose largely from his vow to get tough on foreigners who have been flooding us with goods.

It has never been clear whether Trump sincerely believes what he says—given his history of making products in other countries offering low-cost labor—but it's always been apparent that he has no real grasp of the subject. He doesn't know much, and he doesn't know what he doesn't know.

When he bragged about the $50 billion the Japanese SoftBank Group plans to invest in the United States, Trump clearly had no clue that it will actually hinder his effort to curb imports.

Before people in Japan can make such an investment, they need American dollars, which are not printed in Tokyo. How do Japanese get American dollars? By selling goods or services in the United States.

His threat to hit China with stiff tariffs has had similarly self-defeating consequences. Worries he'll start a trade war have caused a sharp decline in China's yuan against the dollar—which will reduce the price of Chinese goods shipped here while raising the cost of American products sold there. After attacking the Chinese for lowering the value of their currency, the president-elect has driven it down for them.

He exhibits scant knowledge even on his favorite topics. Though Trump denounces NAFTA as a disaster, I've never heard him cite a single provision he doesn't like. All he knows is that we run a trade deficit with Mexico, which he assumes is a terrible thing.

When he visited the Chicago Tribune for an interview with the editorial board last year, he claimed to favor free trade but complained that Ford was building a plant in Mexico and employing Mexicans. Asked whether that isn't how free trade works, he replied, "What do we get out of it?" His answer: "We never get anything."

What we get from plants in Mexico that ship goods to the United States is just that—goods Americans want at a price they are willing to pay. The chief benefit of international commerce is that it allows the people of a nation to consume more than they would be able to if they had to make everything for themselves. This proposition is one of the oldest and most durable insights of economics.

Trump has the idea that he can save and add American jobs by discouraging U.S. companies from moving production to other countries. He's even threatened to punish those that do. But this is a futile remedy.

If gas furnaces can be made at a lower cost in Mexico, it ultimately doesn't solve anything for Carrier to keep manufacturing them in Indiana. Why not? Because its competitors, foreign or domestic, can put their plants in Mexico, gain a cost advantage and take sales away from Carrier. In the long run, Indiana may find that these jobs won't move away; they'll just disappear.

Trump assumes he can force companies to build more in the United States by imposing tariffs on goods they make overseas for sale here. It would surprise him to learn that such duties would harm not just American consumers but also American producers.

U.S. automakers use a multitude of imported components. Most of the cars built on our soil, in fact, contain more than 25 percent foreign parts. A lot of other products assembled here include materials or pieces made elsewhere.

As a result, any duties slapped on imports would inflate costs for American manufacturers, making it harder for them to sell both at home and abroad. It would even hurt other U.S. firms that buy and use imported goods in their operations. In an era of global supply chains, punishing foreigners amounts to punishing American companies and their workers.

Trump can scrap trade deals, pick fights with China, push for punitive tariffs and try to force companies to keep plants here. But what he really needs to do is find a way to repeal the laws of economics.