Backwards-looking attitudes about race, religion, and sex have been a hallmark of the Republican coalition for decades, and are hardly grounds for Hitler Youth comparisons. 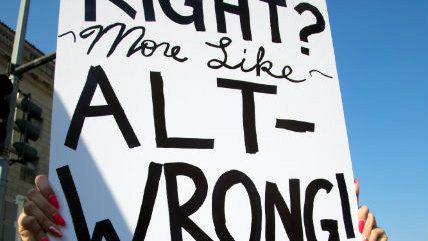 "Nazis. They are Nazis. Call them Nazis."

With slight variations, this has been a common refrain since the National Policy Institute (NPI), a white-nationalist think tank headed by alternativeright.com founder Richard Spencer, held a mid-November D.C. conference devoted to the alt-right's future. The event—which attracted a few hundred attendees, a few hundred protesters, and international media attention—has renewed debate over whether referring to the "alt-right" by its chosen moniker is an affront to decency and lapse in press ethics that risks "normalizing" hate.

Even the Associated Press, print-media's bastion of detached editorial authority, issued recent guidance that cautions against "using the term [alt-right] generically and without definition," as "it is not well known and the term may exist primarily as a public-relations device to make its supporters' actual beliefs less clear and more acceptable to a broader audience." In the past, AP stated, "we have called such beliefs racist, neo-Nazi or white supremacist." Reporters writing about those who claim the alt-right mantle should use quotation marks around the term of modify it with phrases such as "self-described" or "so-called alt-right," AP advised.

At ThinkProgress, editors announced last week that they would "no longer treat 'alt-right' as an accurate descriptor of either a movement or its members" and would "only use the name when quoting others." In its own coverage of "men like Spencer and groups like NPI, we will use terms we consider more accurate, such as 'white nationalist' or 'white supremacist," they stated, calling it a matter of editorial "clarity and accuracy," as there is very little that "distinguishes the alt-right from more hidebound racist movements such as the American Nazi Party and the Ku Klux Klan."

ThinkProgress is right that this is a matter of "clarity and accuracy." It's just hard to see how declaring a movement specific to our current cultural and political moment as synonymous with more broad and historical analogues actually serves the purpose of clarity or accuracy. As Julian Sanchez writes at The Washington Post, "The Nazis, the Ku Klux Klan and the Cambodian Khmer Rouge are (or were) all violent racist movements — and using the specific names instead of referring to them as 'violent racists' does not seem to have been much of an obstacle to recognizing them as such. They're all also distinct historical phenomena, and our understanding of them would not be enhanced if we insisted on using the same generic description for all of them."

People worrying that the term "alt-right" sugarcoats the bad beliefs of those it describes ignore the way most people actually relate to language and mass communication. Alt-right isn't a term that previously meant something else in U.S. politics but got co-opted by racist extremists. It is a new term, and one still rapidly evolving and gaining meaning, which means alt-right is as alt-right does right now.

If those who self-identify as alt-right keep shouting "Heil Trump!" while throwing up Nazi salutes, blasting out hateful anti-Semitic memes, and espousing the dangers of race-mixing, people will get the picture. We don't need thought-leaders to say "this movement calls itself alt-right but they're really racists and anti-Semites!!!!" because the term alt-right itself will become synonymous with these beliefs. And it will do so in a way that's specific to our current context, rather than muddying the waters with poor historical analogies.

The term "Nazi" isn't a Kleenex or Xerox situation, where we just throw it around now to mean "all people with beliefs that skew nationalist or racist." Nazis (and groups like the KKK) are inextricably connected to their originating times and contexts, and all the socio-political pathologies that flourished in them. And while there are certainly some parallels between the alt-right and historical hate-groups, considering them all interchangeable isn't merely inaccurate, it also obfuscates the kind of real and meaningful differences that are crucial to understanding (and stopping) the alt-right's rise.

There are currently varied swaths of people who identify as alt-right—an evolving and amorphous category currently in the midst of a "civil war" over who can rightfully claim to be its true progenitors and heirs. Some, and perhaps a large majority, hold somewhat racist, religiously-biased, or anti-immigrant views. But for every explicitly white-nationalist alt-righter of the NPI variety, there are several Breitbart-reading, Milo Yiannopoulos worshiping kids who believe the alt-right is simply about opposing "political correctness" and "social justice warriors"; dudes who dig Donald Trump and not-so-long-ago called themselves Tea Partiers; former "pick-up artists" and men's rights activists who had been apolitical, or fitting uncomfortably in the libertarian or Republican spheres; and fringe conservative intellectuals, like the neo-reactionaries, who care more about extolling the virtues of monarchy than making white-power great again.

One can argue that all of these alt-right factions share certain underlying and unsavory ideas when it comes to women, immigrants, and racial, religious, and ethnic minorities. The core of alt-right does seem to hinge on a sort of white, male "identity politics." But American exceptionalism that borders on bigotry and backwards-looking attitudes about race, religion, and sex have been a hallmark of the Republican coalition for decades, and are hardly grounds for Hitler Youth comparisons.

This isn't merely a matter of accuracy in journalism, or being "fair" to alt-right members. The exploitation-creep inherent in calls to call the alt-right "literal Nazis!!!" will ultimately work against their opposition, because it makes the media and chattering classes look hysterical and untrustworthy.

Consider someone with an average-American media diet upon hearing that "the alt-right are Nazis." Does the alt-right want to eradicate Jews, they might wonder, or to persecute sexual minorities? Do they advocate conquering foreign nations to make way for Aryan supremacy worldwide? Do they want to nationalize the means of production, destroy capitalism, enforce compulsory sterilization for certain classes, make people wear religious symbols on their clothing, and prohibit interracial marriage? To bring back segregation in U.S. public spheres, and ship certain people off to work camps? Does the alt-right idolize Hitler, or claim to endorse Nazi goals?

If the answer to all of the above questions is no—and, despite some in the alt-right's trolling use of things like "Hail Trump!" salutes, this seems to be the case—then I imagine your average American will find the Nazi comparison a bit inflated. And if the media, which most Americans already distrust immensely, is being hyperbolic about the Nazi thing, well… who's to say they're right at all about the alt-right being racist or dangerous? If the press seems willing to exaggerate to make a point about this group, why should folks believe anything we say about them?

American trust in what media, politicians, and any authority tells them is already incredibly low. We're a culture that values skepticism and individual inquiry, trusting more in our own impressions and observations than those relayed from on high. Or, put another way, people are more likely to believe conclusions they come to themselves than ones force-fed to them in some orchestrated national paradigm. They're not passive vessels for what press feeds them, and when the press uses biased or biasing language that can easily be refuted, we merely increase potential for distrust. And in doing that, we give the alt-right an opening to question any negative characterization of them, no matter how truthful. Once we have set people up to find our "literal Nazis!' pose lacking, what's to make them believe any and all admonitions about the alt-right aren't just wolf-crying?

Right now, the respectable consensus seems to be that pundits, press, etc., have a responsibility not to report accurately on the alt-right but to describe them in certain language and, above all, tell readers and viewers outright how evil and dangerous the alt-right is. But there's a reason the biggest trope of persuasive writing is to show, don't tell. If the alt-right is really as racist and insidious as many people believe, audiences and readers will see that. And many will come to the same conclusions that the woke-class has about how to characterize the alt-right. Which puts alt-right leaders in the much less advantageous position of having to ask ordinary Americans, "Who do you believe, us or your own lying eyes?" rather than "us or the lying press?"