A 'Change Election'? Just the Opposite

Trump vote really a desire to 'change' back. 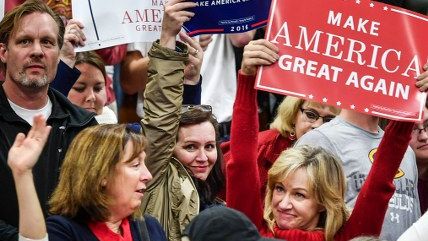 Was this a "change election"? Donald Trump's victory is widely attributed to the public's thirst for something new, which he represented and Hillary Clinton didn't. It would be more accurate to say the outcome stemmed from too much change—which has discombobulated conservatives, as well as liberals.

Trump would be very different from past presidents, and that quality appealed to voters fed up with the status quo. But his supporters were voting for something old. "Make America Great Again" is a cry of nostalgia.

Clinton stood for stability, predictability and caution. So the choice boiled down to "undo all the changes I don't like" vs. "don't change a thing."

The problem is that change, however disruptive, is a defining achievement of our age.

The modern capitalist economy is continually adapting to serve the demands of the populace. Material progress and more choices come about through the creation of new methods and new products that make old ones obsolete.

The 20th-century economist Joseph Schumpeter called this phenomenon "creative destruction," which he argued is "the essential fact about capitalism." It has become the essential fact about modern life, indispensable to the rising living standards that Americans expect. But it carries a price: No one is guaranteed that life will forever remain as it is.

Trump ran well, we are told, among working-class whites who have seen the industries that once employed them shrink or vanish. Both he and Clinton, as well as Democratic insurgent Bernie Sanders, cultivated these voters by turning against international trade. But most of the upheaval in our industrial landscape has not been caused by foreign competition.

By one measure, total employment, American manufacturing has wasted away. Since 2000, 5 million jobs have disappeared. But U.S. manufacturing output is 15 percent higher now than it was then and nearly double what it was in 1987.

A lot of automaking jobs have moved not to Mexico but to Tennessee and South Carolina. A lot of coal mining jobs in Appalachia have been lost to natural gas fracking operations in Texas.

But politicians act as though well-paying jobs should be tenured perches. That can't be the case in a healthy, dynamic economy—not with blue-collar jobs and not with white-collar ones.

Law was once a lifetime ticket to a high income. Not anymore. Law firms are shedding partners, and the Bureau of Labor Statistics says lawyers can expect to see more price competition, more tasks going to paralegals and some work being outsourced overseas. The number of people working at newspapers has been slashed by 38 percent in the past decade. A century ago, 1 in 3 Americans worked on farms. Today, it's 1 in 50.

Change is something to navigate, not something to obstruct. Our lives are easier, better and longer than those of generations past, and those achievements have been built on the ruins of defunct businesses and occupations. I would prefer that people get their news on printed pages, but my preferences hold no sway with readers who like electronic transmission.

But the ubiquity and familiarity of change don't make it less a source of anxiety. And the endless transformation extends to the realms of culture, religion and family life, where it's also often unwelcome.

The resistance comes in different forms among different people. Conservative whites feel besieged by immigrants, whose language and customs are sometimes jarringly alien.

Liberals and minorities in places such as San Francisco and Brooklyn resent gentrification and rising housing prices, which remake the neighborhoods they call home.

Nostalgia for the 1950s and '60s is common across the political spectrum. Working-class whites remember them as an era when high-wage factory jobs were plentiful and the culture was less open to exotic influences. Liberals fondly recall that inequality was moderate, unions thrived and people still believed in government. Conservatives miss the low crime rate, sturdy families and cultural uniformity. (Blacks, women and Latinos: Your memories may vary.)

It may be normal to cherish fond memories of the good old days, but for better or worse, they can't be resurrected, and it's a fraud for political leaders to pretend they can. Anyone who wants to stop or roll back the tide of change picked the wrong century in which to be born.