Overregulation of the industry keeps business owners in limbo. 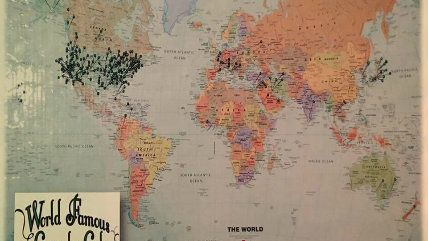 Since she first got involved in marijuana activism, Madeline Martinez has wanted to give cannabis consumers a place of their own—somewhere out of the way where they could smoke in peace and security.

Initially she tried to provide this through a series of small and short-lived "cannabis cafés" for Portland-area medical marijuana patients, the first of which was just a rented room in the back of a failing restaurant. When voters approved full-scale legalization in 2014, however—a campaign she was deeply involved in—Martinez saw an opportunity to go big.

In July of the following year, she opened the World Famous Cannabis Café in Southeast Portland. There, marijuana consumers of all stripes could come and—for a $10 daily membership fee—smoke weed, order food, and enjoy a range of pot-themed events, from ganja yoga to twice-weekly sessions of stoner bingo.

Almost immediately her café was a huge hit, quickly living up to its global name. "We had people coming from all over the world, straight from the airport, wheeling their carry-ons into the café," Martinez says. A map on the wall soon became studded with pins marking visitors' countries of origin—places as diverse as Australia and Iran.

And then, almost as quickly as it started, the World Famous Cannabis Café was forced to shut down. In December 2015, Martinez was informed by Multnomah County health officials that on-site cannabis consumption at the café was running afoul of post-legalization changes to Oregon's Indoor Clean Air Act (ICAA), which banned marijuana smoke in public areas and places of employment.

Martinez protested that as a fee-charging private club staffed by volunteers, these rules did not apply to her establishment. County officials, though, acting on regulatory guidance from the Oregon Health Authority (OHA), were unmoved.

Facing massive fines, Martinez had no choice but to close the café down, hosting her last round of bingo on March 7, 2016.

Legalized But Not Normalized

The shuttering of Martinez's World Famous Cannabis Café, sad though it was, was hardly unique. Indeed, her experience is emblematic of the struggle of many cannabusinesses in Oregon's post-prohibition environment. Though their product is now legal, legislators and regulators have continually failed to treat the marijuana industry as normal. Instead, they've busied themselves with erecting an invasive and confusing regulatory structure that has stifled the growth of this infant industry.

It wasn't supposed to be like this. Following the passage of Measure 91, which legalized marijuana for those 21 and over in 2014, voters were promised that the rollout of a legal recreational market in the state would be done quickly, efficiently, and without "excessive regulation."

Measure 91 laid out a very clear path forward to accomplish that end. Recreational marijuana sales were to be legal statewide, localities were forbidden from taxing the stuff, and those that wanted to prohibit new cannabusinesses from opening in their jurisdictions would have to go through the ballot initiative process. Measure 91 also sought to streamline the regulatory burden by vesting rulemaking power in a single agency, the Oregon Liquor Control Commission (OLCC). The OHA was to play merely an advisory role.

Crucially, however, Measure 91 left many of the practicalities of legalization to the State Legislature to determine. In June 2015—just as the World Famous Cannabis Café was getting ready to open its doors—lawmakers passed H.B. 3400, which represented a significant retreat from the liberal initiative passed by voters.

First of Measure 91's provisions to go were the restrictions stopping local governments from re-enacting their own prohibitions. In a major concession to more conservative areas of the state, H.B. 3400 removed the requirement that recalcitrant prohibitionists work through the initiative process to ban cannabusinesses. Instead, it was decided that the recreational marijuana industry could be banned with a simple vote of a county commission or city council, so long as that locality had given Measure 91 less than 45 percent of its vote. About 100 local governments have since chosen to implement recreational bans in one form or another, meaning that for about half the state, prohibition remains very much in effect.

The legislature also chose to repeal the state pre-emption on local taxes on marijuana, instead allowing for a 3 percent levee on recreational sales on top of the 17 percent statewide fee. This November, voters in over 100 Oregon cities voted to impose such taxes. In one case, residents of Canby, Oregon, opted to both ban and tax recreational pot sales.

The patchwork of local rules and restrictions enabled by H.B. 3400 was then mirrored in the bill's approach to statewide regulation. Under the bill, the OHA, the Oregon Occupational Safety and Health Administration, and the Oregon Department of Agriculture—which were supposed to have merely advisory roles—were all given significant regulatory powers in their own right.

This has led to "too many hands in the pot," says Amy Margolis, executive director of the Oregon Cannabis Association. Marijuana businesses face an almost impossible obstacle in the need to comply with rules from so many different agencies—rules, she says, that are often contradictory and poorly understood by the very regulators tasked with enforcing them.

Nowhere has this been more evident than in the ongoing debacle over marijuana product testing. According to H.B. 3400, all cannabusinesses are required to have their products tested for mold, mildew, potency, and pesticides. The bill tasked the OLCC and the OHA with determining the specifics of these tests, and also required that the OHA accredit the labs that would end up conducting them.

What the two agencies produced in the way of testing guidelines proved incredibly onerous. Businesses were required to have samples from every 10-pound batch of their product tested for 60 different pesticides. This substantially raises the cost of compliance, says Trista Okel, owner of the marijuana extract company Empower Oil.

Thanks to the new rules, Okel has seen her bill for pesticide testing—something the company was already doing prior to the bill's passage—go up by $2,100 per test. A similar increase was reported by Burl Bryson of the edible company LunchBox Alchemy, who says the rule change has cost his business tens of thousands of dollars.

The predictable result has been a major and ongoing bottleneck.

Okel says she was forced to shut down her operations for over a month for want of the OHA-approved marijuana her company needs to make its extracts. Bryson had to lay off 18 people due to an inability to get his edibles tested. Many more businesses are still sitting idle in the hope of more reasonable rules from the OLCC, and Okel and Bryson speculate that some of them will never reopen.

Applications for these licenses have been flooding into the OLCC, but of the nearly 1,700 requests that have been filed, only about 400 have been fully approved. Three-quarters of these are for marijuana growers, while only 90 wholesalers, processors, and retailers have received licenses from the state.

Despite the lack of progress, the OLCC and OHA have stood behind their regulatory approach. In a press release put out on September 30, the Liquor Commission acknowledged that its self-described "groundbreaking effort" at regulating the industry was still in a "developmental" stage, but claimed the regulations had been written in close consultation with the weed industry and were part of a "comprehensive effort to protect consumers."

The press release also announced that some 20 marijuana strain names—including Jedi Kush and Smurf Pussy—were being prohibited because of their potential appeal to children.

Mark Pettinger of the OLCC says that his agency has worked hard to adapt to the needs of cannabusinesses as it crafts rules to govern the industry. The licensing system has been altered, for example.

When it comes to complaints about the pesticide testing requirements, Pettinger says his agency relies heavily on scientific guidance from the OHA to determine what safety standards are appropriate, but promises the commission is "trying to be flexible within the parameters we are given from other agencies."

Despite their frustrations, many advocates and business owners are also hopeful they'll be able to work with the commission to fix some of the regulatory problems. Anthony Johnson, chief petitioner for Measure 91 and a member of the OLCC Rules Advisory Committee, says that whatever difficulties cannabusinesses have encountered, he believes regulators at the Liquor Commission "really want the system to work and they are relatively willing to adapt and adjust as needed."

Bryson likewise expressed the view that many of the disputes his business has had with the OLCC are mostly the result of "growing pains" that will be ironed out over time.

The industry seems far less optimistic about its dealings with the OHA, which Johnson says has "never been as willing to adapt to the needs of the cannabis community." He points to the dismissive attitude that agency has long taken towards its own medical marijuana program, choosing not to promote it and even arguing against expanding it to patients suffering from post-traumatic stress disorder. This hostility to the drug has, he says, biased its regulatory approach to the new recreational market.

This is all, of course, bad news for Martinez, who is seeking regulatory relief from the OHA in the form of a special carveout to the ICAA for her business. As she points out, the law already contains exceptions for the state's cigar stores and hookah bars. That her marijuana café is not accorded the same level of protection clearly rankles her. "If someone chooses to use a hookah, or a cigar, please, by all means," she says. "But don't come looking for me when you are telling these people it's OK to use a toxic substance, and yet my rights are being trampled."

Martinez vows to keep fighting for the normalization of cannabis consumption. In the new post-legalization world, she says, marijuana users should no longer have to stand for their continued exclusion from normal life. "We're not lepers," she says. "We refuse to be now."