Trump Is Not My President, and Clinton Is Not Our Secretary 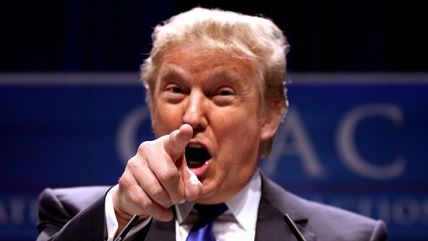 The protesters and rioters who have been swarming streets are right: Donald Trump is not their president.

He is not your president, either. He won't be until Jan. 20.

This might seem like a petty quibble, but it shouldn't. It gets to a point that has fallen out of favor in recent years, and needs reviving.

The late Robert Peniston was a Richmonder who had served as navigator aboard the presidential yacht during Harry Truman's administration. According to Peniston, he dropped in on the retired Truman in Independence, Mo., some years later. When he addressed Truman as "Mr. President," Truman corrected him. There is only one president of the United States, Truman insisted: the one in the Oval Office. Peniston could call him "Mr. Truman."

This comes as news to the folks at the Truman Library, who say others often addressed Truman as Mr. President without any objection from him. Still, it's an appealing story—one that speaks to our general belief in the equal dignity of individuals regardless of rank or social class.

Americans pay tribute to that value, as they should. Liberals in particular obsess over it—sometimes to the point of viewing any form of inequality as evidence of injustice until proven otherwise.

The presidential election has revived interest in the idea of common dignity as well. In an interview with NPR, novelist Richard Russo recently speculated on reasons for Donald Trump's success: "When you lose work, which has happened to many of Donald Trump's supporters—or they fear is going to happen to them—you lose your dignity. Maybe you're nobody. Maybe you don't matter." In The Wall Street Journal last week, American Enterprise Institute president Arthur C. Brooks explained "How Donald Trump Filled the Dignity Gap."

And yet Americans often undermine that small-d democratic belief in equal dignity when they flout the Truman doctrine about titles—which they do constantly.

"As I understand it," said Trump campaign manager Kellyanne Conway the morning after the election, "Secretary Clinton commended Donald Trump on a hard-fought race and congratulated him for his victory and he told Secretary Clinton she's very smart, very tough, had waged a tremendous campaign."

Clinton stopped being Secretary of State on Feb. 1, 2013. Yet Conway has a great deal of company. Hillary Clinton recently has been called "Secretary Clinton" by Rep. Trey Gowdy (R-S.C.), FBI director James Comey, all three presidential debate moderators, members of the media, and more.

It shouldn't. Once someone leaves office, he or she should leave the title behind, too. Regarding ambassadors, the State Department even says so in black and white. According to one diplomatic training manual, department regulations long forbade anyone not "actually in the job of ambassador" to use the title of ambassador, but "long-standing custom and practice" has rendered doing so permissible. In short: It's against the rules, but nobody pays attention. The State Department also says those who were called "The Honorable" may continue to be after leaving office.

All of this title promiscuity runs contrary to the Constitution—which stipulates, in Article I Section 9, that "no title of nobility shall be granted by the United States." True, titles such as Secretary, Governor, Speaker, and so on do not pass down to the holder's offspring, so calling Newt Gingrich "Mr. Speaker" might not be giving him a title of nobility in the strictest sense. But it certainly qualifies in the figurative sense. He's Mr. Gingrich now.

For what it's worth, Virginia's Constitution is pretty clear, too: "The chief executive power of the Commonwealth shall be vested in a Governor." A governor. Singular. At any given moment, the state has only one.

Many public officials probably know the story of Lucius Qunctius Cincinnatus, who was plucked from his farm and appointed dictator during an hour of Roman crisis. He dealt with the crisis, celebrated the achievement in Rome, and then went back to his farm, a common man once more. In America, being a common man should be nobility enough. It's a shame more politicians today apparently don't agree.