A Tech Agenda for the Trump Administration 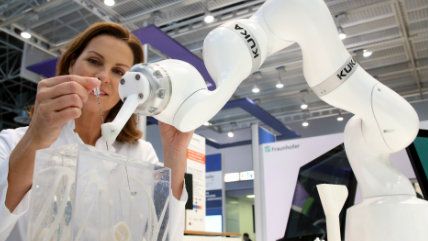 A new president-elect is here again, and as usual, not everyone is happy about their fellow countrymen's choice. Among these mourners is most of Silicon Valley, which some estimates suggest sent Hillary Clinton 60 times the campaign donations given to her rival Donald Trump.

It's easy to see why most technologists—Peter Thiel (as usual) excluded—preemptively favored the prospect of a Clinton presidency, what with her decades of government experience, tailored technology platform, and close relationships with Silicon Valley executives. But technology policy does not have to be a partisan battlefield. If President-elect Trump is serious about "Making America Great Again," one of his first priorities should be to implement policies that will make America innovate again. Below are a few tech-policy ideas that people from all kinds of political backgrounds could benefit from and get behind.

The Nobel prize-winning economist Robert Lucas famously said that "Once you start thinking about growth, it's hard to think about anything else." A one percent difference in annual GDP growth can mean the difference between widespread prosperity and continued stagnation over the course of a decade. And one of the best ways to encourage growth is to encourage innovation.

It's no secret that regulation kills innovation. But few people realize just how over-regulated Americans actually are. A recent study by my colleagues at the Mercatus Center estimates that our major mess of federal regulations has depressed annual economic growth by around 0.8 percent. Who knows what kind of quality-of-life improvements we could have been enjoying right now without such sabotage? Perhaps we could have been Tweeting from our flying cars. But alas, such lost wonders are unseen, and therefore go unmourned.

Modern regulations are so harmful for growth because of their prohibitory nature. Many policies are guided by an outdated risk-management concept called the "precautionary principle." This approach dictates that certain economic activities should be discouraged or even banned altogether if policymakers deem them to be too risky. But if you cut off all risks, you cut off many rewards. For example, Food and Drug Administration (FDA) regulations rob severely ill people of the option to pursue experimental drug treatments. Federal Aviation Administration rules for commercial drone far overestimate the risk of collision, thereby pushing the most promising applications to other countries (Amazon is currently testing drone delivery in the UK because their rules are more accommodating than ours). And the list goes on and on.

To promote innovation and growth, the Trump administration should embrace what my colleague Adam Thierer calls "a culture of permissionless innovation." Entrepreneurs should not be required to ask for permission to innovate from skeptical bureaucrats. They should be free to experiment and even fail without preemptive interference. Where risks do prove to be uniquely damaging to the public, common law norms or smart regulations could be appropriate to address them—but this should be one of the last remedies, not a knee-jerk reaction.

Limiting our economic activities means limiting our human possibilities. As a businessman, Donald Trump was notorious for taking big risks and reaping big rewards. As a president, Donald Trump should allow and encourage the rest of America to do the same.

Get serious about "the cyber"

Trump was not exactly a brilliant paragon of cutting-edge cybersecurity policy on the campaign trail. The few times that he did bring it up, it was largely to attack Hillary Clinton for her own lax security with her personal email server, or to issue vague platitudes about how a Trump administration would be great at "the cyber." But if President Trump follows through on his promise to bring in the "best and brightest people" to advise his administration, his cybersecurity positions will hopefully change for the better.

One of the most important things Trump should do is focus on strengthening information security in the federal government. Federal cybersecurity is so weak, it's laughable; the total number of reported federal information security failures has increased by an astounding 1,169 percent since 2006, with many of these incidents involving the personal data of federal employees and citizens. But throwing money at the problem and creating new departments hasn't fixed anything. Reports from agency inspectors general routinely find that federal employees fail to follow security guidelines required by the Federal Information Security Modernization Act (FISMA), yet enjoy increased security funding all the same.

This is not only a failure of good governance, it creates a horrible example for the rest of the country to follow. There is much innovation to be made in the area of information security, yet the U.S. government continues to lag rather than lead.

To actually improve federal cybersecurity, President Trump will need to hold agencies accountable for failing to implement basic security practices like good password management, device and communication encryption, and multifactor authentication. The era of getting more funding and creating new offices no matter how bad an agency failed at security must come to an end.

And Trump should be sure to invest in security personnel as well. Good security professionals are paid handsomely in the private sector, not so much on the federal level. To attract the best talent, government wages must be competitive. There's no need to go into debt for this, either: Funds that are saved from wasteful and unsuccessful FISMA spending can go to information security salaries instead.

There's much that the federal government can do to improve national cybersecurity more generally, as well, such as supporting and promoting strong encryption techniques, reforming laws that chill security research (such as the Computer Fraud and Abuse Act), and supporting education and awareness campaigns for individuals and corporations. But first, the government must lead by example. The feds need to get their own house in order before they can hope to be successful in fixing America's cybersecurity as a whole.

A nation is not its government; a nation is its people. And a nation cannot be great if its government does not allow its people to experiment, fail, and eventually triumph over adversity. Nor can a nation be great if it prohibits its best and brightest from freely pursuing their own fortunes, or if it prevents the best and brightest in other countries from working with us to create something great.

As Robby Soave has argued, Trump won in no small part due to his unambiguous condemnation of toxic "political correctness." Americans are sick and tired of being harangued by an assortment of identity groups that demand submission according to certain unchosen characteristics rather than revealed outcomes. And this kind of anti-American bigotry extends far beyond American college campuses. In Silicon Valley, if a startup or project is deemed to be "too male," "too white," or even "too Asian," it can become the target of ongoing external critique and subversion. Entrepreneurs are cajoled to change their focus from making the best product possible to wasting money and time on "diversity initiatives" that fail at everything but, perhaps, ameliorating bruised egos. And the threat of discrimination lawsuits are a constant albatross around founders' and venture-capitalists' necks.

Reasonable people can debate whether or what kind of intervention may be appropriate to engineer a particular desired social outcome in the tech sector. But the troubling anti-innovation undercurrent in the technology scene extends far beyond clumsily trying and failing to give protected groups a hand up; the very idea of meritocracy has been under absurd attack. Ironically, this often ends up hurting the groups that activists purport to want to help. And in the meantime, this web of cultural and litigious threats serves to slow innovation and progress. To change the culture of technology for the better, President Trump should foster America's tradition of meritocracy and expand opportunity for all.

We must also make it easier to bring the best technology talent to America. This country boasts some of the most successful technology companies in the world in part because of our relatively hands-off policies. But there are plenty of places in the world where this is not the case, and where there is talent that is just itching to move to a more innovation-friendly country. Take Europe as an example: These countries are among the most developed in the world, with cutting-edge research universities and an impressively educated population, but how many successful European technology companies can you name off the top of your head? (Yes, Rovio technically counts.)

Trump talked a lot about his big, beautiful wall, but he also said something about a big, beautiful door. Fast-tracking high-skill immigration from countries like these is a no-brainer to boost innovation that everyone can get behind.

This is just the beginning

There is a lot of low-hanging fruit to be gleaned from smart technology policies. This is just a start. (For more pro-innovation policy ideas, see the tech policy agenda that my colleague Eli Dourado put together.)

In terms of a tech-policy vision going forward, President Trump should take a cue from one of his most famous and unexpected supporters (and a major innovator in his own right): Peter Thiel. As Thiel describes in his book Zero to One, he made his fortunes largely by eschewing chasing the trends of the crowd and instead finding ways to do something new better than anyone else.

Trump has already disrupted the way that we do politics. But to make lasting change for the better, he should disrupt the outdated ways that we have done technology policy as well.