Senator declares: "President-elect Donald Trump campaigned on changing our disastrous foreign policy. To appoint John Bolton would be a major first step toward breaking that promise." 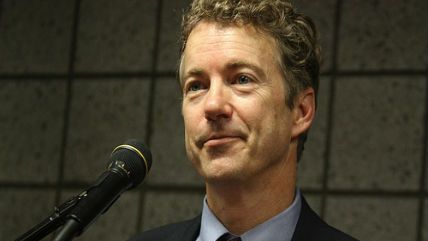 Sen. Rand Paul (R-Ky.) is not happy with the news that former U.N. Ambassador John Bolton may get nominated for secretary of state in the upcoming Trump administration.

Paul wrote today, in an op-ed at Rare, that:

One of the things I occasionally liked about the President-elect was his opposition to the Iraq war and regime change. He not only grasped the mistake of that war early, but also seemed to fully understand how it disrupted the balance of power in the Middle East and even emboldened Iran.

We liberated Iraq, but today their best friend is Iran, their second greatest ally is Russia, and their third strongest alliance is with Syria. Trump really seems to get the lesson. Hillary Clinton never did.

But the Bolton news, Paul thinks, casts doubts on whether or not Trump has any non-interventionist sense:

None of this is secret. It's all out there. Perhaps the incoming administration should take a closer look.

Paul goes on to point out that Trump was willing to say that the Iraq invasion was a mistake, based on lies. Bolton also thought that it was right that we should have intervened to overthrow Gadhafi in Libya, another decision candidate Trump decried.

The fact that Russia has had a base in Syria for 50 years doesn't deter Bolton from calling for all out, no holds barred war in Syria. Bolton criticized the current administration for offering only a tepid war. For Bolton, only a hot-blooded war to create democracy across the globe is demanded.

Paul is even willing to go for the implicit "chickenhawk" argument:

Bolton would not understand [the dangers of war] because, like many of his generation, he used every privilege to avoid serving himself. Bolton said, with the threat of the Vietnam draft over his head, that "he had no desire to die in a Southeast Asian rice paddy." But he's seems to be okay with your son or daughter dying wherever his neoconservative impulse leads us: "Even before the Iraq War, John Bolton was a leading brain behind the neoconservatives' war-and-conquest agenda," notes The American Conservative's Jon Utley.

Let's hope that opposition is solid and strong enough to mean filibuster if necessary. It's not like Rand Paul doesn't know how to do it. [UPDATE: But thanks to the Democrats and Harry Reid, Senators can't filibuster non-SCOTUS presidential nominees anymore, as of 2013. I regret the error.]

If it comes to a straight vote on Bolton, Paul would need to convince at least two and perhaps three (depending on the outcome of the Louisiana runoff) other Republicans to join him in opposition. Maybe Mike Lee of Utah would stand up for non-intervention, and Alaska's Lisa Murkowski was anti-Trump and at least doubtful for a little bit about Bolton's bonafides back in the 2005 U.N. ambassador confirmation battle. We'll see. [UPDATE: As Washington Post's Dave Weigel points out, given the composition of the Senate Foreign Relations Committee, Rand Paul alone joining all the Democrats, if they stick Party line, would be enough to block Bolton in committee, though that is not procecurally sufficient to totally prevent a full Senate vote. Paul says he feels the same about another floated SoS possibility, Rudy Giuliani, as well.]

Matt Purple reported here at Reason in August on Bolton's addiction to regime change. I blogged in 2007 on Bolton's bizarre belief that our foes are doing us a favor if they give us the proper legitimate-seeming excuse to wage war. Ed Krayewski blogged on Bolton's support of Obama's terrorist-creating drone policy.

I was doubtful back in October that Trump could possibly have the serious non-intervention right stuff.