The dangers of unchecked executive power. 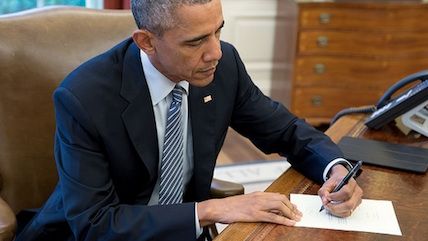 In December 2007 presidential candidate Barack Obama told The Boston Globe that if he won the 2008 election, he would enter the White House committed to rolling back the sort of overreaching executive power that had characterized the presidency of George W. Bush. "The President is not above the law," Obama insisted.

Once elected, however, President Obama began to sing a different sort of tune. "We're not just going to be waiting for legislation," Obama announced. "I've got a pen and I've got a phone…and I can use that pen to sign executive orders and take executive actions and administrative actions."

Obama's pen and phone did not sit idle. For example, despite the fact that the Constitution grants Congress, not the president, the authority "to declare war," Obama unilaterally declared war on Libya in 2011. Similarly, despite the fact that the Constitution requires the Senate to confirm all presidential appointments to high office, except in those limited circumstances in which the Senate is not available to act because it is in recess, Obama unilaterally placed multiple officials in high office without senatorial approval during a period in which the Senate was still in session.

To make matters worse, many of Obama's fervent liberal supporters pretended to see nothing wrong with such obvious abuses of executive power. For example, consider the behavior of the prestigious editorial board of The New York Times. Back in 2006, when George W. Bush had the reins, the Times published an unsigned editorial lambasting Bush for his "grandiose vision of executive power" and his foul scheme to sidestep the Senate and unilaterally install his nominees in high office. "Seizing the opportunity presented by the Congressional holiday break," the Times complained, "Mr. Bush announced 17 recess appointments—a constitutional gimmick."

But guess what the Times had to say a few years later when President Obama had the reins and he utilized the exact same gimmick? "Mr. Obama was entirely justified in using his executive power to keep federal agencies operating," the Times declared in defense of Obama's three illegal appointments to the National Labor Relations Board. (Those three NLRB appointments, incidentally, were ruled unconstitutional by a 9-0 Supreme Court.)

Perhaps you can see where I'm going with this. Once President-elect Donald Trump takes the oath of office in January 2017, he too will have a pen and a phone at his presidential fingertips. Should Trump grow weary of the constitutional limits placed upon him, and decide instead to ignore the Constitution and wield unilateral executive power, he won't exactly have far to look if he wants to find a recent presidential role model to emulate.