Against Shaming 'White Women' and 'Female Misogynists' for 2016 Election Results

Who, exactly, are these impassioned social-media screeds supposed to sway? 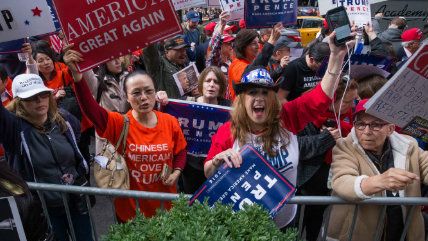 White women have "sold out … the world by voting Trump," Slate proclaimed Thursday, in what's quickly become popular post-election wisdom. "White Women Need to Admit That We Are Part of the Problem" and "White Women…Failed Other Women." read headlines at Bustle.com. "Let's get off the floor and get busy," comedian Samantha Bee advised on her Wednesday night show. "Especially you white women. We've got some karma to work off."

White female Trump fans were also more likely than their Clinton-supporting demographic counterparts to live outside of urban areas. And, overall, Trump fans tended to skew older than Clinton voters, with just 37 percent of voters between 18- and 29-years-old voting Trump, according to exit poll data.

All of this makes Trump's female fan base one of the least likely groups to be active on Twitter. Older, conservative, non-urban women without college educations also seem unlikely candidates to be reading progressive, feminist-focused, millennial publications like Bustle, Mic, or Jezebel—all publications that have seen fit to publish posts by white women calling out white women and pleading with them to rethink their priorities. (Mic called Trump's win a sign that a majority of Americans "don't believe anyone who isn't a cisgender, heterosexual white man deserves full personhood.") And even if Trump's female fan base was reading these websites, what makes it seem that women willing to vote for Trump—whether because of his more unsavory tendencies or in spite of them—are likely to see the error in their ways after a good scolding by liberal, white, feminist strangers? What makes this group of women seem likely to feel suddenly moved by Muslim-American women or Latina immigrants who feel threatened by a Trump presidency?

Who, exactly, are these impassioned public screeds aimed at white "female misogynists" supposed to sway?

And, at the risk of imputing this post with a little too much of the dreaded "choice feminism," isn't a bit weird to scold women for being bad feminists because they exercised their own judgments and consciences in picking a presidential candidate? As a collection of myriad individuals and not some immutable hivemind, women will never be a monolithic voting block, and that's a good thing. I disagree with women who find it reasonable to vote for Trump, but hey, I didn't vote, and others find that a moral calamity. In any event, I don't presume to know precisely why women who voted for Trump did so, and I don't think it's fair to assume they all acted with callous disregard to the plights of non-white, cis, straight, Christian people. And I think a lot of people who do make a lot of incorrect assumptions about Trump voters.

For one thing, most of these denunciations are made by people who may not be a part of the professional press or political machine but are still among a rareified American class that's deeply invested in online media and social media. Which leads to making assumptions about all or most voters that just don't hold true.

For those who've been acutely aware of Trump's every alarming proposal, online sentiment, and public gaffe for more than a year, voting for Trump might seem like a clear affront to liberal, feminist, and multicultural ideas. But most of the white women who helped drive Trump to victory probably aren't following him on Twitter or reading ever Daily Beast accusation against him. (To paraphrase some Simon and Garfunkel sarcasm, 'they're so unhip, when you say Pepe, they think you're talking about Pepé Le Pew, whoever he was.') They're not necessarily aware of all of his alleged transgressions, or that he's got oodles of (at least performatively) anti-Semitic fans on social media, or what the alt-right is, or what social justice warriors are, or thinking that a vote for Trump is a primarily a vote for white supremacy. You or I might find it unconvincing that Trump's more outrageous statements are just him being an entertainer or speaking metaphorically, but that doesn't mean everyone's unconvinced, or that—given the truths we do hold dear about reality TV and politics—it's a completely out-there belief. And if someone can rationalize away Trump's downsides while genuinely believing in his skills and plans, or in Republican policies more generally, or that for whatever reason stopping Clinton's agenda is of primary importance… well, why not Trump?

This isn't to say that worried feminists shouldn't even try to change people's minds about Trump's proposals or fitness as president. But assuming—and agressively stating—that any women who voted for Trump did so out of "internalized misogyny" and conscious animosity to diversity probably isn't the best way to get anyone on your side. It reads more like temper tantrums and performative wokeness than a sincere attempt to understand or overcome the force that drove Trump's female support.

And ditto for the women cursing out women who voted for Gary Johnson, Jill Stein, or any non-Clinton candidate. Clinton isn't only far from a perfect liberal candidate generally but also an incredibly messy feminist, and some people—including many women, and even many ardent feminists—will never be convinced that voting for someone they find morally abhorrent just to heighten the chances of defeating someone else morally abhorrent is a defensible position.

I know people are angry/shocked/disappointed, and it's tempting to lay all the blame at a cartoonishly evil cohort of racist and women-hating women, but if Clinton had been a different candidate, she could have won this thing (not necessarily by winning the Trump fans over, but by inspiring more independents and disillusioned Democrats to get out and vote). That she wasn't shouldn't serve as an excuse for elite white feminists to lash out—and especially not under the guise of intersectionality—at the diverse group of women who weren't on board with a Clinton presidency at all costs.