Five years of autonomy in Cheran 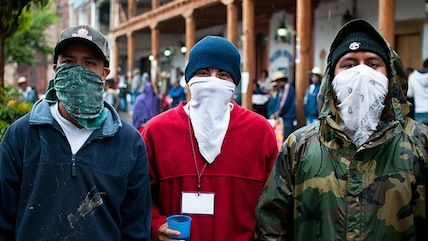 Almost a thousand miles south of Houston, the Mexican town of Cheran was once afflicted by gangsters who had branched into the timber trade. They killed, they kidnapped, and they kept cutting down trees that they didn't have a right to take. And so, the BBC reports,

on Friday 15 April 2011, Cheran's levantamiento, or uprising, began. On the road coming down from the forest outside Margarita's home, the women blockaded the loggers' pick-ups and took some of them hostage. As the church bells of El Calvario rang out and fireworks exploded in the dawn sky alerting the community to danger, the people of Cheran came running to help. It was tense—hotheads had to be persuaded by the women not to string up the hostages from an ancient tree outside the church….

The municipal police arrived with the mayor, and armed men came to free their hostage-friends. There was an uneasy stand-off between the townspeople, the loggers and the police. It ended after two loggers were injured by a young man who shot a firework directly at them….

The police and local politicians were quickly driven out of town because the people suspected they were collaborating with the criminal networks. Political parties were banned—and still are—because they were deemed to have caused divisions between people….

Meanwhile armed checkpoints were established on the three main roads coming in to town.

Today, five years later, those checkpoints still exist. They are guarded by members of the Ronda Comunitaria—a militia or local police force made up of men and women from Cheran.

Now that the gangsters are no longer raiding the forest, the locals manage the resource, in what sounds like the sort of community-based system that the late Elinor Ostrom frequently wrote about. Meanwhile, the BBC's writer notes that "in the last year there have been no murders, kidnaps or disappearances" in Cheran, even as such crimes are common in communities just a few kilometers away. The place hasn't declared independence—various sorts of government funding are still flowing, and when serious crimes do occur the attorney general can prosecute them—but the town of 20,000 has achieved a remarkable level of autonomy.

To read the whole thing, go here. To read about some other efforts in the area to battle the cartels outside the state, go here—and to see how the state eventually absorbed those efforts, go here. And even further south, to read about a village in Colombia that kicked out all armed groups, from right-wing paramilitaries to left-wing guerrillas to officially sanctioned soldiers and cops, go here.