"Donald Trump Will Protect You. He Is the Only One Who Can."

Is Trump's new campaign ad just more high-level trolling of his foes, or another sign that we can't rightly expect a peaceful, non-bellicose Trump administration? 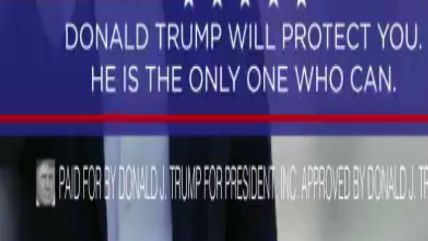 Many on the non-interventionist wing of the libertarian coalition like to believe that Donald Trump is the best major party choice, mostly because he's willing to say over and over again that the Iraq war was a disastrous mistake and because most of the usual bad suspects of the GOP foreign policy establishment seem to hate him.

That is, most of them usually do, except for neocon thought leader David Frum, Mr. "Axis of Evil" himself. Frum says this week in The Atlantic that the key to the Republican Party moving forward is to accept and recognize that Trump is mostly right about everything even if he's a bit of jerk, and Frum is so undisturbed by anything about Trump's foreign policy that he doesn't mention it at all, merely saying he's glad Trump is for "enforc[ing] borders and national identity."

Matt Welch and I have both suggested that what we seem to know about Trump's foreign policy commitments moving forward aren't really all that hopeful for those who anticipate a Trumpian Peace.

A new ad from the Trump campaign with lots of images of a fragile and ill-seeming Hillary Clinton should add to the disquiet that any non-interventionist on the Trump train should feel.

The ad is mostly about listing menaces to America that a woman this lacking in vigor, in the ad's telling, can't be expected to handle on behalf of the American people: "Iran promoting terrorism, North Korea threatening, ISIS on the rise, Libya and North Africa in chaos."

We are told by an ominous voice that "Hillary Clinton failed every single time as secretary of state" to end those problems.

And in an unspoken and frankly super-creepy slogan flashed at the end: "Donald Trump will protect you. He is the only one who can." (The best one can hope is this is more chat board level trolling of his nerdy enemies who dare suggest there is something fascistic at the root of Trumpism.)

There is not in this official campaign spot a hint of a suggestion of a clue that Trump's method of protection will involve less foreign intervention than is traditional for the past few decades of U.S. foreign policy.

However, since the ad says nothing specific one way or the other, and obviously some of the problems like Libya are clearly connected to past (though feckless) interventions she supported, I suppose those emotionally attached to Trump can keep holding on to non-interventionist hope.