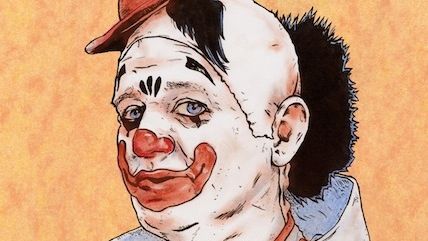 Two months into the Great Clown Panic of 2016, we finally have a clear-cut case of a "clown" committing a violent crime. It isn't really the kind of crime that people were worried about, and the perp wasn't really dressed as a clown, but…

Actually, there's no need for a but. This is an ordinary crime committed in a not-all-that-unusual way. Some journalists are treating it as a sign that the Clown Threat is real, but that says more about media sensationalism than it does about anything else. What we have here is a lesson in how crime-trend narratives are constructed.

Some background: For about two months now, people have been reporting encounters with mysterious, malevolent clowns, sparking rumors that the jokers plan to kidnap children, molest children, shoot up a classroom full of children, or otherwise victimize people, especially children. As is often the case during these phantom-clown scares—yes, this isn't the first one—the incidents generally fall into four categories:

1. Someone, usually a kid, reports that he spotted a clown lurking or that a clown attacked him. No one finds the clown. The episode never gets resolved, but it probably didn't really happen.

2. Someone reports that he spotted a clown lurking or that a clown attacked him. No one finds the clown. The episode does get resolved, because the person who made the report confesses to making it up.

3. Someone circulates a clown threat or clown sighting or clown something on Facebook or another social media platform. No clown actually shows up.

4. A prankster decides to take advantage of the fear spread by #1-3 by dressing as a clown and scaring people. He does not kidnap, molest, or shoot anybody.

In other words, the scare is almost entirely a mix of hoaxes and hysteria. There are a couple of cases out there where police are taking reports of clown attacks seriously, but even then no one has been able to locate the alleged attackers. The "suspect wearing a clown costume" who reportedly grabbed someone at Texas State University has not been apprehended, for example. And while the headline-writers at SFGate took an alleged kidnapping attempt in Concord, California, seriously enough to write this credulous hed…

…when you read the actual article, you find that (a) yet again, only one witness has supposedly seen the clown; and (b) even if the incident did happen, the so-called kidnapping attempt consisted of the suspect pulling once on a child's arm while conversing with her mother. Strange things happen every day, but I'm gonna go out on a limb and suggest that a crook isn't likely to try to snatch a child right in front of her mom, especially while dressed in a costume that could only make it harder to avoid everyone's attention as he slips away.

So what's the bona fide violent crime that I mentioned at the beginning? On Tuesday night, a man wearing a clown mask robbed a Walgreens in Brownstown Township, Michigan.

He did not try to kidnap or molest anyone. He did not announce his intentions in advance on Facebook. He wasn't even "dressed as a clown" in any meaningful sense of those words, though I've heard that phrase in the subsequent press coverage. He was wearing dark pants, a hoodie, and a mask to cover his face; he just happened to pick a clown mask, as robbers sometimes do. In short, his crime has virtually nothing in common with the phantom-clown scenarios that have been floating around the noösphere since August.

Yet eight seconds into the Detroit TV station WDIV's report on the robbery, the anchor calls the stick-up "just one of what seem to be a string of clown attacks." And almost two minutes in, a reporter declares that there's a "growing concern about the escalation of violence in these clown-related attacks," as though armed robberies were the next stage in some sort of spiral toward Armageddon:

Since then, two more robberies in southeastern Michigan have been committed by a man wearing a clown mask, a hoodie, and dark pants. I will not be surprised if it turns out to be the same guy.

Are there any other solid crimes to report? Well, some clown-scare roundups have also included a stabbing in Reading, Pennsylvania. That incident doesn't seem to have much in common with the larger clown rumors either; details are hazy, but it appears to have been a fight over a clown mask. The mask was being worn (on top of his head, not over his face) by the victim, not the stabber.

So no, we're not in the middle of a wave of clown attacks. There's just one clown-related crime that has seriously taken off in the last couple of months, and that's the crime of filing a false police report.