Trump's pandering to xenophobia is nothing new for the GOP.

Matt Welch | From the November 2016 issue 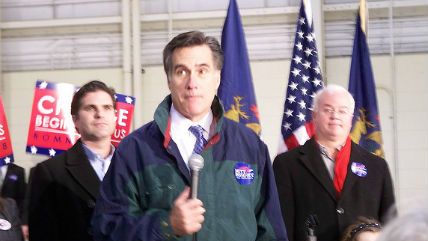 The day after one of Donald Trump's campaign speeches about cracking down on illegal immigration, National Review columnist Jay Nordlinger, a lifelong conservative who "ceased being a Republican" the moment Trump sewed up the GOP nomination, lamented via Twitter that "people you could never have guessed would be gullible—are. Falling for cons. Re immigration, for example."

But many of the #NeverTrump conservatives currently agonizing over the future of their party are deluding themselves over its past: Republicans have been falling for immigration cons—and perpetrating many of their own—since long before the real estate outsider vaulted to the front of the GOP presidential field by accusing Mexico of "sending" to the U.S. "people that have lots of problems," including the problem of being "rapists." Years after Trump exits the political stage, conservatism's leading lights will need to take a long, hard look at how they deliberately embraced a fact-untethered anti-immigration populism, thereby enabling some of the most authoritarian central planning this side of, well, Hillary Clinton.

So it is that the alleged party of limited government is lining up behind a candidate who, in that August 31 speech in Phoenix, promised government-run "ideological certification" examinations on visitors to the United States. The party of business and trade promises American companies who are even thinking about relocating overseas that "there's going to be a lot of trouble for them. It's not going to be so easy. There will be consequences. Remember that: There will be consequences. They're not going to be leaving, go to another country, make the product, sell it into the United States, and all we end up with is no taxes and total unemployment."

Trump's plan, drawing from such conservative stalwarts as Alabama Sen. Jeff Sessions and the National Review–published restrictionists at the Center for Immigration Studies, includes forcing more Americans to prove their legal working status by clearing their names through the federal government's e-Verify database of Social Security IDs. A new deportation force would be created, deportees would be transported "great distances" back to their home countries, 5,000 new border patrol officers would be hired and deployed in the field, a biometric entry/exit system would be affixed to each legal visitor to assist in the removal of all visa overstayers, and "extreme vetting" would be applied to foreigners who dare visit the country. And after all that expensive enforcement buildup and activity, somehow (magic?), "We will have a peace dividend to spend on rebuilding America, beginning with our American inner cities."

Trump's draconian solutions were necessary to counteract what he portrayed in the speech as an unrecognizably dystopian America. "We are in the middle of a jobs crisis, a border crisis, and a terrorism crisis like never before," he claimed, warning that "this election is our last chance to secure the border, stop illegal immigration, and reform our laws to make your life better. I really believe this is it. This is our last time." Especially if we don't block the "Trojan horse" of Syrian refugees from slipping in. Instead of that, "we will build safe zones" for refugees in their own countries, "and we'll get the money from the Gulf States."

How did National Review, which ran a splashy "Against Trump" issue in January 2016, respond to these head-scratching flights from reality? Like so: "The policy was unassailable," declared Editor Rich Lowry. "From an immigration hawk point of view, it is almost certainly the soundest speech ever given by a major-party presidential candidate."

At least give Lowry points for intellectual consistency—a year prior he had urged the GOP to "pander to Trump on immigration," while his magazine editorialized that "Trump's Immigration Plan Is a Good Start—for All GOP Candidates." They're wrong, but at least they've been wrong for a long time. Some of the politicians currently giving Trump reputational cover have no such excuse.

Start with the warm-up act at the nominee's Phoenix speech, former New York Mayor Rudy Giuliani, who leaned into the assignment by wearing an ugly baseball cap emblazoned with the phrase "MAKE MEXICO GREAT AGAIN ALSO." Trump's speech devoted considerable energy to blasting "sanctuary cities," a malleable term that generally denotes a municipality that instructs its officials not to inquire about or report to the federal government the immigration status of people who come into contact with cops, schools, hospitals, and other organs of government. As one big-city mayor once put it, you need to "protect undocumented immigrants…from being reported to the [Immigration and Naturalization Service] while they are using city services that are critical for their health and safety, and for the health and safety of the entire city." If residents live in fear that each interaction with a government employee could lead to deportation, they are not going to report crime, seek medical attention for communicable diseases, or send their kids to school.

That big-city mayor was Rudy Giuliani. And one of the reasons Rudy is not President Giuliani today is that Republican candidates and voters punished him for being "soft on immigration." How is it that the man who once decried "the anti-immigration issue that's now sweeping the country," and compared it to "the Chinese Exclusionary Act, or the Know-Nothing movement," ended up shilling for the most anti-immigration candidate in modern history? Only he can know for sure. But part of the explanation for a lot of Republicans' whiplashing behavior on the issue is that politicians respond and adapt to incentives.

In August 2007, when Giuliani was in the middle of a year-long, mostly uncontested stint at the top of Republican presidential primary polls, Mitt Romney, then in fourth place, started attacking him. "If you look at lists compiled on websites of sanctuary cities, New York is at the top of the list when Mayor Giuliani was mayor," the former Massachusetts governor said at the time. "He instructed city workers not to provide information to the federal government that would allow them to enforce the law."

Romney kept hammering away at the sanctuary charge throughout that fall. By the end of 2007, Romney had caught up to Giuliani-who would exit the race the following month—and was setting his sights on emerging front-runner Sen. John McCain (R–Ariz.). "McCain pushed to let every illegal immigrant stay here permanently," a December Romney ad charged, with questionable accuracy. "Even voted to allow illegals to collect Social Security."

McCain would survive the onslaught, but only just. The senator's campaign had nearly imploded in July 2007 over his previous lead role in co-sponsoring comprehensive immigration reform, and it was only after blatantly reversing himself on that and other immigration-related positions that McCain ended up in the GOP pole position usually reserved for the previous cycle's runner-up. The lesson was not lost on 2008 runner-up Romney: To compete in a GOP primary it's best to pander hard to the anti-illegal-immigration sentiment among the conservative base.

Four years later, Romney, who as governor in 2005-2006 endorsed the comprehensive reform packages championed by McCain and then-President Bush, was determined to wage the 2012 primary as the biggest immigration hawk in the field. When Texas Gov. Rick Perry opened up a polling lead in the summer of 2011, Romney repeatedly hammered him for creating a "magnet for illegal immigration" by allowing in-state tuition for illegals at Texas universities. With Perry thus dispatched, Romney out-hawked Newt Gingrich by calling for policies that would lead people to "self-deport." A wound-licking Gingrich later complained that "as a party, we simply cannot continue with immigration rhetoric that in 2012 became catastrophic-in large part because it was not grounded in reality." Yet by May 2016, Gingrich, too, had endorsed Trump.

This kind of naked political cynicism isn't unique to Gingrich, Romney, Giuliani, or even Perry (yes, the guy who once told his immigration-bashing competitors "I don't think you have a heart" has also boarded the Trump Train). As long as there's a conservative market for it—and a market left for conservatism—authoritarian and unattainable anti-immigration politics will be with us long after Trump has gone away.