If N.C. Food Trucks Can Discriminate Against Gays, Then Why Aren't They?

Daily Show segment doesn't illustrate a serious problem. It highlights how culture often works issues out on its own. 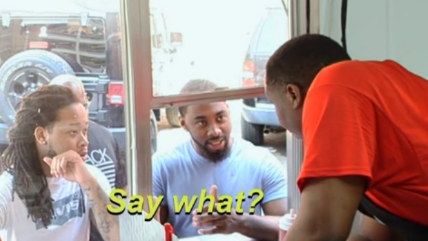 Let's start off by fact-checking and correcting both The Daily Show's and Huffington Post writer Cavan Sieczkowski's understanding of North Carolina's HB2. This is the controversial "bathroom bill" that requires transgender people to use the government and public school facilities that match the sex listed on their birth certificates.

There's more to the law, but it does not, as The Daily Show claims, permit or suddenly change state law to exclude gay and transgender people from antidiscrimination protections. In reality, North Carolina does not and never has provided state-level antidiscrimination protection for LGBT folks in employment and public accommodations. It's always been legal to discriminate against gay people and transgender people in North Carolina. Sexual orientation and gender identity are not classified as protected categories in their laws.

What HB2 does is forbid cities within North Carolina from adding sexual orientation and gender identity (or any other classification the state doesn't recognize) to their own antidiscrimination laws. This was done in a response to the City of Charlotte expanding its antidiscrimination and public accommodation laws.

I realize this is probably overly nuanced nitpicking for something like The Daily Show, but based on a stunt they recently pulled, it's really worth reminding folks that the government hasn't given anybody "permission to discriminate." The possibility of this kind of discrimination has been around all along because it hadn't been forbidden. The segment also incorrectly states that discrimination against LGBT people in the state will be legal for as long as HB2 is on the books. It will remain legal even if HB2 is repealed (at least on the state level) because, again, sexual orientation and gender identity are not considered protected classes by the state. (In fact, given the way the law is written, the state actually could add sexual orientation and gender identity as protected classes without repealing the law at all and keep all the transgender bathroom nonsense intact)

In an attempt to highlight the alleged absurdity of this mischaracterized "permission" to discriminate, The Daily Show sent a BBQ food truck to North Carolina to randomly refuse to serve people in comic fashion. Isn't it strange, the segment wants us to understand, to refuse to just arbitrarily refuse service to people because you think they're gay?

Yes, it is strange for a food truck to refuse to serve customers based on their sexual orientation. Did anybody involved with this stunt maybe stop for a moment and realize that they were criticizing something that wasn't happening and therefore they were actually making a remarkably uncompelling argument?

If there were a serious, widespread problem with discrimination against gay people, they wouldn't have had to set up a fake food truck, would they? They'd be able to just go down to North Carolina and go to one of the existing businesses who were discriminating against gay people and do one of those interviews where they get people to say stupid things so the viewers can feel superior.

But they didn't. They had to fabricate a Seinfeldian Soup Nazi-style environment to try to present an exaggerated possibility. It's an attempt at satire. It's an attempt to comically present a potential logical conclusion. But the flaw is that it actually highlights how little interest there is in widespread discrimination against gay people. There are no scenes of Jim Crow-style behavior targeting LGBT folks. Yes, discrimination exists, but there is no widespread conspiracy to exclude gay and transgender people, and there is so much more cultural pressure that can resolve it positively without getting the state involved.

The irony here is that they're exaggerating the potential threat of a problem to justify legal intervention controlling individual behavior, which is … exactly what Gov. Pat McCrory and supporters of monitoring public bathroom use are doing. There is little actual justification for the state telling transgender people which facilities to use because the potential threats to others are significantly exaggerated. This is what happens when you try to use laws to fight cultural issues. Every problem must be overblown in order to justify using legislation and courts to punish your cultural opposition.

Watch the Daily Show segment below: