Gary Johnson as Governor of New Mexico: A Thoughtless Politician, Or One Laser-Focused on Spending? 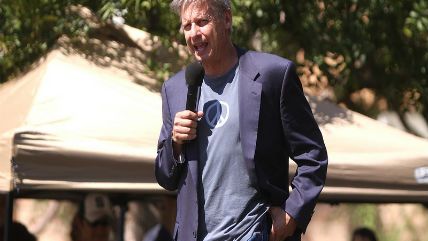 A new profile in the Washington Post of Libertarian Party presidential candidate Gary Johnson's career as Republican governor of New Mexico in the 1990s has a headline that promises an expose of a politician who just doesn't know nearly enough about policy to be viable: "Years Before 'Aleppo Moment,' Gary Johnson Showed Little Interest in Details of Governing."

Reporter Robert Samuels indeed found many people involved in the state's politics during Johnson's administration to say dismissive things about his perspicacity. A representative sample, both specific and generic:

Longtime state Sen. Stuart Ingle (R) recalled how Johnson, soon after taking office in 1995, mostly shrugged and stared during their first meeting together. As Ingle asked Johnson questions about his agenda, Ingle said, Johnson's most common refrain was, "I don't know."….

Over the next eight years, New Mexico lawmakers would struggle to work with a governor who paid little attention to details. Those who worked closely with Johnson, then a Republican elected as a political novice vowing to shake up the established order, recall a chief executive who would speed through meetings and often preferred to discuss his fitness routine than focus on the minutiae of policymaking…..

"It is easy to make simple decisions when you don't spend time learning about the nuances of policy," said state Sen. Mimi Stewart (D)…Stewart said Johnson was never vindictive or mean, but he just did not focus when she sought to talk with him about policies such as improving education….

"A know-it-all dictator," is how the late state representative Jerry Lee Alwin, a conservative Republican, described Johnson to the news media at the time. "He just doesn't listen."

But Libertarians or even fiscal conservatives could easily read this same profile and see qualities to admire, even if politicians and bureaucrats might not: a governor laser-focused on cutting spending over becoming a knowledgable policy wonk, and running a disciplined office.

As governor, he imposed schedule discipline. His Cabinet would meet precisely at 8 a.m. every Monday, power bars and water at the table. Each member had only two minutes to deliver a report.

"If you can't explain it in two minutes, it doesn't need to be done," said Diane Kinderwater, Johnson's former communications director…..

"With [Johnson], it was always, 'Yes,' 'No' or 'I'll think about it,' " said Ingle, the state senator. "It would take five or six minutes. He had an agenda and he knew what he wanted to figure out."

Then, perhaps the real reason New Mexican legislators might have found Gov. Johnson annoying or frustrating:

The first time the legislature sent a budget to Johnson's desk, Ingle said, lawmakers thought they had done well by allotting only "a couple hundred-thousand dollars" more than Johnson's goal of $2.8 billion.

"We couldn't believe it," Ingle said. "But I said, at least he told us what he was going to do. This man is honest."

Annual summaries compiled by nonpartisan legislative aides during that time describe Johnson's relationship with the legislature as "rocky" and "strained." Over eight years, he vetoed more than 700 bills.

Steven Neville was a Republican county commissioner in rural San Juan County, in the state's upper northwest corner, when the legislature agreed to spend $1 million in preparation for a national rodeo competition being held there. Johnson vetoed the measure. As a result, the county had to find money on its own…..

An examination of eight years of legislation showed that Johnson vetoed a bill to create specialized license plates because he thought it was too costly. He vetoed the formation of an African American affairs committee and a task force examining how to get equal pay for women because he thought they were a waste of time and money.

I wrote back in June about the debate over whether or not Johnson was sufficiently tough on taxes and spending during his New Mexico days.