Did the Climate Influence Colombian Voters' Rejection of the FARC Peace Deal?

The political climate in Colombia and especially next-door Venezuela may have, a lot more than any weather concerns. 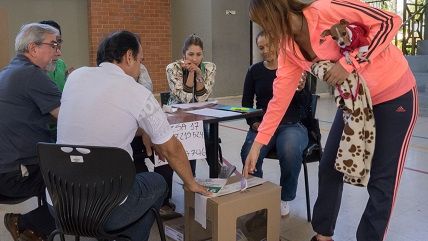 Voters in Colombia narrowly rejected a peace deal struck between the government and the Revolutionary Armed Forces of Colombia (FARC), a Marxist guerilla/narcotrafficking group. With 99.25 percent of votes reported, 50.24 percent of voters rejected the deal, while 49.75 percent voted to approve it. Out of nearly 35 million eligible voters, about 13 million came out to vote, The City Paper of Bogota reports.

Heavy rains from Hurricane Matthew along the coast, where support for the government and the referendum (the latter becoming something of a proxy vote on the former) was believed to be strongest, were blamed on lower turnout there. Climate change alarmist Naomi Klein tweeted that if such reports were true, the role of climate change in "intensifying conflict" was on a "whole new level." It's a specious argument. Irrespective of whether Hurricane Matthew is even a result of whatever Klein defines as "climate change," its effect on the referendum, if any, is not innately pro-conflict. Had the hurricane hit a part of the country considered a stronghold of opponents of the deal, it could've, assuming any effect in the first place, helped get the Yes vote over the top.

As it stands, the political climate in both Colombia and especially neighboring Venezuela played a far more prominent role. The low-intensity conflict between FARC, other left-wing militant groups, as well as right-wing militant groups, paramilitary groups, and the government has been ongoing since the early 1960s, when FARC was founded, and can be traced even back to the 1940s, and the era of La Violencia, a ten-year civil war sparked by the assassination of the left-wing populist politician Jorge Gaitan. The United States has sporadically intervened in the conflict over the last half century.

Opponents of the government complained that the president, Juan Santos, associated himself too much with the deal, turning the referendum on the peace deal into a referendum on him. Other supporters of the No vote insisted a better deal was possible, one where FARC militants would face more penalties for their various crimes during the conflict and perhaps would not receive unelected seats in the national legislature. The leaders of FARC themselves indicated prior to the vote that a rejection of the deal would not send them back into the bush, but that they were committed to peace, making the vote less of a "peace or war" decision than some backers of the deal portrayed it as.

The current peace deal emerged from negotiations held in Havana—the United States eventually sent a diplomat of their own, signaling approval of a peace deal in principle in a conflict U.S. intervention—via material support for the government and its counter-narcotics/drug war policies in the region has helped intensify. The situation in Venezuela, whose government once tried to broker a peace between FARC and the Colombian government, may have influenced voters as well. Once a prominent example of actually-existing socialism for socialist boosters in South and North America, Venezuela is now quickly descending into a self-inflicted political and economic chaos, with widespread shortages and an increasingly authoritarian government that blames all kinds of actors other than their own central planners on the government's failures. The military even stepped in this summer to take control of food distribution services. It's not difficult to imagine Colombian voters looking at the tragic outcome of left-wing, socialist, chavismo in Venezuela and deciding they did not want to risk that for their own country by inviting Marxist extremists to participate in the political process on the strength of their terrorist campaign alone.