Government Creates a Fake Expert, Won't Release Files on Him Because Privacy

In search of Guy Sims Fitch 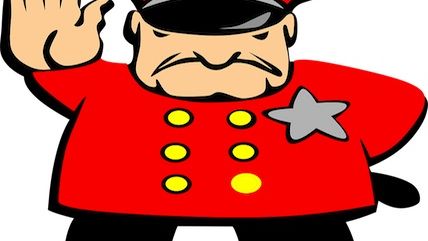 "Guy Sims Fitch" was a persona created by the U.S. Information Agency in the early Cold War era. Various people on the agency's payroll would write articles on economics under Fitch's name, and those pieces then appeared in news outlets around the world. It would be nice to know who exactly was writing those articles, and it would be nice to know if those pseudonymous scribes were writing under any other names as well. But when a reporter filed a Freedom of Information Act request for more info on the Fitch program, the government told him he'd first have to get permission from the writers involved—that is, from the very people whose identities he was trying to uncover. Alternately, he could prove that they're dead.

"Under the Freedom of Information Act," Gizmodo's Matt Novak explains, "federal agencies are required to take into consideration the privacy rights of living individuals. Dead people don't have privacy rights under US law…[b]ut Guy Sims Fitch can never die, because he was never born." So when Novak asked the Central Intelligence Agency for its Fitch files, this happened:

They've asked that I submit verification of identify for the editors and journalists who wrote under the name Guy Sims Fitch in the 1950s and 60s, along with documents showing that those people consent to having their information made public. And in the case of any editors who wrote under Guy Sims Fitch who might be dead, I'm supposed to submit proof of death. Unfortunately, I don't have a list of government agents from the 1950s that wrote under the name Guy Sims Fitch. I was kind of hoping that the CIA would fill me in on that. Or, at the very least, tell me a bit more about why they were using fake people to support causes that presumably real people could have written about.

Remember: The federal government has no trouble redacting information that it doesn't want to reveal. It would not be terribly difficult for it to release these documents with the names of any still-living figures blacked out. That could still provide plenty of useful data about where the articles were placed, what they said, what other people were involved, and perhaps even whether any parallel programs were underway.

This is a program that began more than half a century ago. The agency that spearheaded it doesn't even exist anymore. There should be tons of information whose release would not violate even the most absurdly stringent conceptions of privacy rights or national security.