The precedent-setting case could have major implications for all sorts of online publishers. 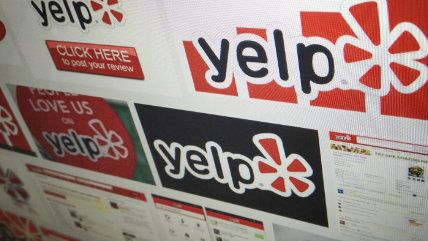 Yelp is refusing to remove reviews posted to the website that were ruled defamatory by California courts. The company has appealed to the California Supreme Court, which this week agreed to take on the case. And it's a good thing, too—as it stands, California courts have essentially created a European-style "right to be forgotten," in which people could force the removal of online content that portrays them in a true but unflattering light.

Legal scholar Eugene Volokh called the case "an interesting and important" one for Internet law and civil procedure. In an August letter asking the California Supreme Court to review the case, Volokh and co-authors said the appellate court's decision jeopardized "a vast range of online speech."

Another signatory to the letter, Santa Clara University law professor Eric Goldman, described the decision—which, because it was one of the rare (less than 10 percent) appellate rulings marked as published, is citable and binding precedent—as "flat-out wrong" and wrote that he "can't stress enough how terrible [the] opinion is."

Defamatory speech falls under one of a few exceptions to broad First Amendment protection, and Yelp's lawyers say it usually follows court orders to take down content that has been ruled defamatory. But in this case, the reason the court ruled in Hassell's favor is because Bird submitted no documents or statements in her defense and never showed up to the trial.

The San Francisco County Superior Court issued a default judgement to Hassell, awarding her $557,918 and ordering Bird to remove the offending content from Yelp. In addition, the court held that "Yelp.com is ordered to remove all reviews posted by AVA BIRD under user names 'Birdzeye B.' and 'J.D.' attached hereto as Exhibit A and any subsequent comments of these reviewers within 7 business days of the date of the court's order." (J.D. was allegedly an alias of Bird's on Yelp, though this was never definitively established.) The judgment became final on March 16, 2014.

Yelp was served with an injunction to remove Bird's reviews if she didn't do it herself. She didn't. Neither did Yelp.

The company's lawyers contended that it couldn't be compelled to remove Bird's content because Yelp hadn't been party to the court proceedings in question. Bird may not have had the resources to fight Hassell's lawsuit, but Yelp certainly does. Yet Yelp was never named in Hassell's suit, and thus had no opportunity to defend itself.

In a letter to Hassell, Yelp said the court's judgement and order had been "rife with deficiencies and Yelp sees no reason at this time to remove the reviews at issue. Of course, Yelp has no desire to display defamatory content on its site, but defamation must first be proven."

That May, Yelp filed a motion to set aside and vacate the Bird decision on the "grounds that the legal basis for the decision is not consistent with or supported by the facts or applicable law." Specifically, it asserted that the First Amendment protected Yelp from having to remove the content, as did section 230 of the federal Communications Decency Act. It also claimed that the company's right to due process had been ignored.

A California Superior Court denied the order. It also found that Yelp was "aiding and abetting the ongoing violation of the injunction" and thus "demonstrated a unity of interest with Bird."

Yelp then appealed to the California Court of Appeal for the First Appellate District. In June, the appellate court denied Yelp's motion to vacate the decision and upheld the bulk of the original decision. It did remand the case back to the trial court with the direction to limit Yelp's removal requirements to "specific defamatory statements" and not all future posts from Bird's account.

Because Bird's statements had been found defamatory by default by a lower court, the appeals court decided that there were no First Amendment issues of concern. It also dismissed any due-process concerns. And as for section 230, which prevents third-party publishers and platforms from being held liable for user-generated criminal content, the court found that it didn't apply because no liability was imposed on Yelp.

Having to remove potentially factual reviews when providing an open forum for factual reviews is the core of Yelp's business model? Not a liability, says the court. Facing contempt of court charges and economic penalties if it doesn't comply? Not a liability, says the court. In fact, "sanctioning Yelp for violating a court order" to remove the posts "would not implicate section 230 at all," it states.

The ruling exposes user-generated content sites—a category which includes everything from Yelp to Twitter to Backpage to any outlet with a comments section—to legal liability for things users post.

It also "opens up holes that everyone… can abuse," notes Goldman. Following the pattern laid out here in this case, all it takes is a defendant that doesn't fight back for anyone disgruntled about online content to force its removal by a third-party. They could also use this process to force removal of posts by unrelated but unidentified users by claiming that these, too, were made by the no-show defendant. It worked in Hassell's case even though it was never proven that user "J.D." was really Ava Bird. Regardless, Yelp was ordered to remove posts from both Bird's confirmed handle, Birdzeye B, and by user J.D.

As Goldman puts it: "Voila! A right to be forgotten in the U.S., despite the First Amendment and Section 230." The opinion's "scrubbing roadmap should be equally effective against search engines," he predicts.

Libertarian-leaning think tank the R Street Institute has also been highly critical of the decision. It "creates an end-run around constitutional due process, eviscerates the First Amendment rights of publishers to distribute third-party speech and creates a loophole to the immunity granted to online publishers by Section 230 of the federal Communications Decency Act," opined Steven Greenhut, R Street's Western Region Director (and a Reason contributor) and Cameron Smith, R Street general counsel, in a letter to the California Supreme Court.

Yelp's appeal to the state Supreme Court seeks to "reverse the orders of the trial court and appellate court, and direct those courts to enter an order granting Yelp's Motion to Vacate the Judgment."

"Occasionally a legal principle adopted to prevent abuse gets transformed through misinterpretation into a weapon for abuse," Yelp stated in its petition. "When that happens in California, it falls to this Court to step in and correct such misuse. This is such a time."