Chilled speech isn't like chilled vodka; it sends people out the door quicker than you might think. [UPDATE: Reynolds has been un-suspended.] 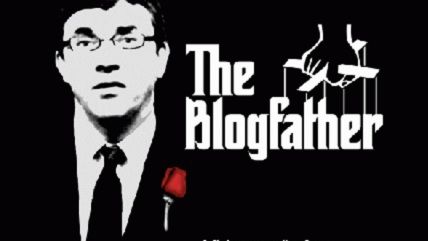 Updated (10:44 A.M.): Glenn Reynolds is back on Twitter. Scroll down to see this return-tweet.

One of the Internet's most venerable institutions—Glenn Reynolds, the University of Tennessee law professor who runs the popular aggregator site Instapundit—has been suspended from Twitter:

His offense was to tweet this in response to protests in Charlotte, North Carolina after a police shooting:

Reynolds defends his tweet at Instapundit, writing, "Sorry, blocking the interstate is dangerous, and trapping people in their cars is a threat. Driving on is self-preservation, especially when we've had mobs destroying property and injuring and killing people. But if Twitter doesn't like me, I'm happy to stop providing them with free content."

Well, I hope he is reinstated immediately and keeps on giving Twitter "free content." Over the past 15 or 20 years, Reynolds (whom I interviewed for one of my very first stories at Reason, about the potential influence of the Supreme Court case United States v. Lopez) has been one of the most-interesting and thoughtful voices on the broadly defined right. He writes everywhere (I recommend especially his USA Today columns) and books such as An Army of Davids and The Higher Education Bubble are the product of an incredibly sharp and serious person with an eye on the possibilities offered by technological and cultural innovation. Since coming online in 2001 shortly before the 9/11 attacks, the Instapundit site has been nothing short of a godsend, collecting and sharing links on an immense variety of topics from electoral politics to private space exploration to human longevity to flash sales at Amazon (for these and other reasons, Reynolds is sometimes called "the Blogfather"). I don't always agree with the spin the various contributors put on current events, but it's the first or second site I check every day after Reason.com.

Whatever you think of the tastefulness of his suggestion regarding the protesters in Charlotte, the idea that he is seriously inciting any sort of actual or real threat is risible. I can appreciate the various pressures that Twitter is facing from all sorts of perspectives. The service is constantly being asked to take material down for any number of reasons, and the requests aren't simply coming from SJWs with bees in their bonnets (indeed, it seems as if the most numerous requests from copyright holders). Twitter lists the most common reasons for suspending accounts here. This seems to be the relevant section in Reynolds' case:

We believe in freedom of expression and in speaking truth to power, but that means little as an underlying philosophy if voices are silenced because people are afraid to speak up. In order to ensure that people feel safe expressing diverse opinions and beliefs, we do not tolerate behavior that crosses the line into abuse, including behavior that harasses, intimidates, or uses fear to silence another user's voice.

Any accounts and related accounts engaging in the activities specified below may be temporarily locked and/or subject to permanent suspension….

Let's be clear: Twitter is a private company and has every legal right to act however it wants when it comes to creating and enforcing rules of conduct (at the same time, publicly stating rules and then failing to live up to them may provide redress for users). So, as with the banning of Milo Yiannopoulis, the alt-right Breitbart editor, we're not talking about classic censorship here in which the government clamps down on speech it finds offensive or subversive.

But that's hardly the end of meaningful discussion, is it? I suspect suspending Reynolds over this was a quick-trigger response by someone (or some-bot) at the service that will quickly be reversed. Certainly, the conversation at Twitter suffers if every tweet that gives offense is punished by a suspension, especially if the suspensions predictably target people from only one part of the ideological spectrum.

Twitter is already facing serious challenges from social-media services such as Snapchat and Instagram, each of which reportedly has more daily users. The last thing it can afford to do—or should do, given its stated commitment to free speech—is to become one more fainting couch in cyberspace where offense it taken easily and often and then acted upon. Twitter's blocking functions work well to help users dismiss and ignore trolls and idiots (however we each choose to define those terms). Better to work on constantly upgrading those sorts of mechanisms than to start suspending people such as Instapundit—the Blogfather, for cripes sake!—for tweets that are not particularly offensive or deplorable.

Chilled speech isn't like chilled vodka; it sends people out the door quicker than you might think.