Running may "just as easily be motivated by desire to avoid the recurring indignity of being racially profiled as by desire to hide criminal activity." 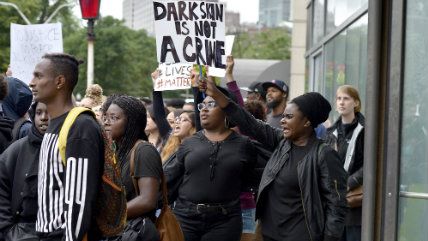 Citing racial disparities in law enforcement, the Massachusetts Supreme Judicial Court ruled Wednesday that black men may have legitimate reason to flee from the police, and that shouldn't be used against them in court.

As protests and controversy continue to erupt around the country over police shootings of black men—riots broke out in Charlotte, N.C. just today over the death of Keith Lamonte Scott at the hands of police—the ruling is a notable embrace by a state supreme court of many of the fears articulated by Black Lives Matter activists.

In its ruling, the court threw out the gun conviction of Jimmy Warren. From WBUR:

Warren was arrested on Dec. 18, 2011, by police who were investigating a break-in in Roxbury. Police had been given a description of the suspects as three black men — one wearing a "red hoodie," one wearing a "black hoodie" and the other wearing "dark clothing." An officer later spotted Warren and another man (both wearing dark clothing) walking near a park. When the officer approached the men, they ran. Warren was later arrested and searched. No contraband was found on him, but police recovered an unlicensed .22 caliber firearm in a nearby yard. Warren was charged with unlawful possession of a firearm and later convicted.

Citing a 2014 ACLU study that found blacks in Boston made up 63 percent of stop-and-frisk encounters with police, despite being only 24 percent of the population, the court ruled police officer's decision to stop Warren was unreasonable, and that Warren's subsequent flight shouldn't be used against him:

We do not eliminate flight as a factor in the reasonable suspicion analysis whenever a black male is the subject of an investigatory stop. However, in such circumstances, flight is not necessarily probative of a suspect's state of mind or consciousness of guilt. Rather, the finding that black males in Boston are disproportionately and repeatedly targeted for FIO [Field Interrogation and Observation] encounters suggests a reason for flight totally unrelated to consciousness of guilt. Such an individual, when approached by the police, might just as easily be motivated by the desire to avoid the recurring indignity of being racially profiled as by the desire to hide criminal activity. Given this reality for black males in the city of Boston, a judge should, in appropriate cases, consider the report's findings in weighing flight as a factor in the reasonable suspicion calculus.

In an interview, Matthew Segal, the legal director of the Massachusetts ACLU, called Tuesday's ruling "tremendously significant decision." The ruling he said, will no longer allow police in the state to stop citizens based on generalized descriptions of suspects. Instead, officers will have to have individualized suspicion of a crime.

"There's an enormous discussion in the country over policing, and this opinion is a reminder that courts are just as important in deciding what police behaviors are OK and not OK," Segal said. "So often, the outrage is directed at the police officer or police department, but beyond that, courts have authorized, by interpreting the word 'unreasonable,' a tremendous amount of violence. This is a court that's heading in a different direction. It's a signal to all courts that they have a role to play in these nationwide discussions over police violence."

Boston Police Commissioner Bill Evans told local reporters that the ACLU report the court relied on was "heavily tainted against the police department" and "didn't take into context who was stopped and why. That report clearly shows that we were targeting the individuals that were driving violence in the city and the hot spots."