The cops were looking for a meth dealer who had not lived there for at least a year. 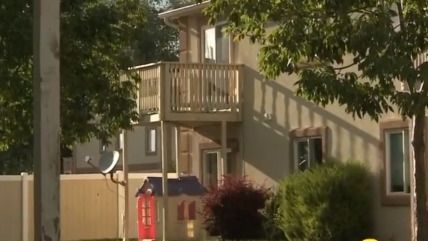 A SWAT team breaks into a home early in the morning based on an informant's tip, expecting to find an armed methamphetamine dealer. Instead they encounter an innocent family with several young children.

Those were the circumstances in which police in Habersham County, Georgia, nearly killed a toddler with an errant flashbang grenade in 2014, leading to a lawsuit that was eventually settled for $3.6 million. Something similar happened last week in Mesa County, Colorado. This time no one was injured or killed, although things easily could have turned out differently.

Around 11:30 p.m. last Tuesday night, the Western Colorado Drug Task Force, which includes representatives from the Mesa County Sheriff's Office (MCSO) and the Grand Junction Police Department (GJPD), received a tip from an informant who claimed cops would find a stash of methamphetamine and guns at an apartment in the Coronado Villas complex in Clifton. The tip apparently was the sole basis for the warrant that 15 to 20 officers served around 5:30 a.m. the next morning. "Upon initial contact at the residence," the MCSO and GJPDO say in a press release, "officers received no answer at the door." That's hardly surprising, given the early hour. Cops routinely conduct drug raids when people are sleeping, the better to discombobulate their targets, and then use the residents' failure to promptly answer the door as an excuse to break it down, which only magnifies the chances of a violent encounter.

"As is standard protocol when probable cause has been developed that illegal or dangerous activity is occurring, and armed with the signed search warrant, officers forced entry into the home, using a breaching tool," the press release says. "During entry into the residence, several windows of the home were broken." Fortunately, the cops did not toss any flashbangs while entering the house, but they terrified the occupants, who included five children ranging in age from 3 to 12. "Ultimately," the cops say, "officers contacted the residents inside the address, and determined that they were not the suspects that officers were looking for."

The phrase "contacted the residents" is an anodyne description of a much scarier reality. "Waking up to guns in my face, I consider that the beginning," the father of the family, Sean Armas, told KJCT, the ABC station in Grand Junction. "That's how it was, all my kids had guns on them. It was out of line….It's a dangerous situation they put my family in, and for my kids, it just keeps playing through their minds."

The police say "further investigation determined that the suspects named by the original reporting party had lived at the address at one time, but had since moved away from the address, which was now occupied by a family with several children." The press release is notably vague on the timing of the change in occupancy, but The Daily Sentinel, a newspaper in Grand Junction, reports that "the family told law enforcement they had been living at the home since October." In other words, the informant's tip was at least a year out of date, assuming that it was not invented out of whole cloth. Apparently police did not think to ask the informant when she had supposedly seen the drugs and guns she reported. And although the police say "surveillance was conducted on the home" between the tip and the raid six hours later, it apparently did not involve figuring out who actually lived in the house cops were about to invade. A neighbor interviewed by KJCT noted that the Armas family has "a little kid's playhouse right in front of their yard," along with various other toys, which you might think would have tipped off the police to the presence of children.

"We are deeply regretful of the experience to which this family was subjected," the MCSO and GJPD say. "We have met with the family, including the children, to explain in detail how such a mistake was made….The most important thing law enforcement can do after an incident like this is carefully evaluate what happened, and determine how we can prevent such a mistake from happening again. We will be doing just that."

In an interview with The Denver Post, GJPD spokeswoman Heidi Davidson admitted police were too eager to storm the house. "It should have been vetted better," she said. "We should have done a better job from the beginning." Lewis told The Daily Sentinel "it is still troubling to us as law enforcement leaders that we had this happen, and we potentially exposed our people and this family to a dangerous situation, and it could have had a tragic outcome."

The press release is contrite. "We are so grateful that no one was hurt, and we want to publicly apologize to the family, and acknowledge what a frightening and disconcerting experience this must have been for them," it says. "We are currently in the process of replacing the windows that were broken, repairing the front door, and arranging for new carpet to be installed, as we are concerned about possible glass in the existing carpet." The Daily Sentinel reports that Mesa County Sheriff Matt Lewis "said the family was receptive to the apology and forgiving."

Sean Armas did not sound very forgiving in his interview with KJCT. "How dare they come in my house like I was a felon?" he said. "My civil rights were violated." KJCT reports that Armas is "frustrated the police didn't investigate the tip further because he's confident if they had the entry never would have happened."

It is worth reiterating a point made by the grand jury that faulted the "hurried" and "sloppy" investigation preceding the Georgia raid. "There should be no such thing as an 'emergency' in drug investigations," it said. "no amount of drugs is worth a member of the public being harmed, even if unintentionally, or a law enforcement officer being harmed….Going into a home with the highest level of entry should be reserved for those cases where it is absolutely necessary….Neither the public nor law enforcement officers should be in this dangerous split second situation unless it is absolutely necessary for the protection of the public."

The basic problem here is that the government insists on using violence when it is not morally justified: in response to peaceful, consensual transactions between adults. But even taking the war on drugs as a given, a little more restraint would go a long way. The false sense of urgency that leads to raids like this one, where the cops felt they had to act so quickly that there was no time for a proper investigation, must be countered by a constant awareness of how a raid can go horribly wrong. The common practice of serving drug warrants by crashing into people's homes in the middle of the night is supposedly aimed at preventing violence, but it makes potentially fatal mistakes more likely, even when the information on which the raid is based turns out to be accurate. Cops are easily mistaken for burglars, and residents defending their homes (or even just blearily descending the stairs with an unidentified object in their hands) are easily mistaken for would-be cop killers. Children are horribly burned by explosive devices designed to confuse the enemy. Fortunately, no one was injured or killed in this case, but it has happened before, and it is bound to happen again.

[Thanks to Mike Krause for the tip.]