NYPD: We Don't Know How Much Cash We Seize, And Our Computers Would Crash If We Tried To Find Out

A bill in the New York City Council would force the NYPD to release annual reports on its asset forfeiture program, but the NYPD says it's impossible. 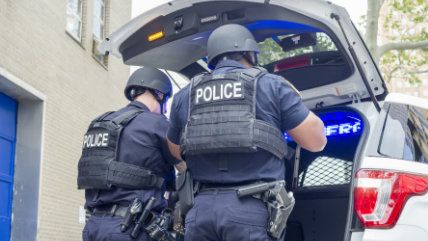 NYPD brass testified before the New York City Council Thursday that it has no idea how much money it seizes from citizens each year using civil asset forfeiture, and an attempt to collect the data would crash its computer systems, The Village Voice reported.

Concerned by the lack of transparency surrounding the NYPD's civil forfeiture program, NYC councilmember Ritchie Torres introduced legislation this year that would require annual reports from the police department about how much money it seizes, but at Thursday's hearing, the NYPD said it has no technologically feasible way to track seized money that was ultimately not pursued through asset forfeiture. From The Village Voice:

"Attempts to perform the types of searches envisioned in the bill will lead to system crashes and significant delays during the intake and release process," said Assistant Deputy Commissioner Robert Messner, while testifying in front of the council's Public Safety Committee. "The only way the department could possibly comply with the bill would be a manual count of over half a million invoices each year."

When asked by councilmember Dan Garodnick whether the NYPD had come to the hearing with any sort of accounting for how much money it has seized from New Yorkers this past year, the NYPD higher-ups testifying simply answered "no."

According to the Voice, the NYPD "claimed that it only legally forfeited $11,653 in currency last year — that is, gone to court and actually made a case as to why the NYPD should be taking this money."

As I reported last month, Bronx Defenders, a legal aid group, is suing the NYPD for public records on its asset forfeiture program, which rakes in millions in seized cash and property from arrests every year. According to the scant records Bronx Defenders did manage to get back, the NYPD reported more than $6 million in revenue in 2013 from seized cash, forfeitures, and property sold at auction, and it had a balance of more than $68 million in seized currency in any given month of that year. Bronx Defenders say the records indicate that the vast majority of seized assets are simply forfeited by default after the deadline passes for the property owner fails to go through the burdensome and Byzantine process of trying to retrieve them by the deadline.

The NYPD's "unclaimed cash and property" sales totaled $6.5 million in 2014 and more than $7 million in 2015, according to the Bronx Defender lawsuit.

Back to The Village Voice:

Testifying in front of committee members, lawyers and advocates from the Bronx Defenders, Brooklyn Defender Services, and Legal Aid Society relayed a litany of horrors experienced by clients who had become trapped by the NYPD's unjust civil forfeiture process. Anca Grigore, a staff attorney at Brooklyn Defender Services, told the story of one client who was arrested while a passenger in another person's car. The NYPD then went to the BDS client's home, told their brother that they needed to move the client's own car because it was blocking a driveway, and then seized the car. The BDS client eventually paid $500 to get the car back from the NYPD six months later. In another case, a BDS client had hundreds of dollars vouchered under the name of a co-defendant, whose criminal case was ongoing — the process took months to play out, and the client had to jump through several hoops just to prove the money was hers.