About that vanishing middle class... 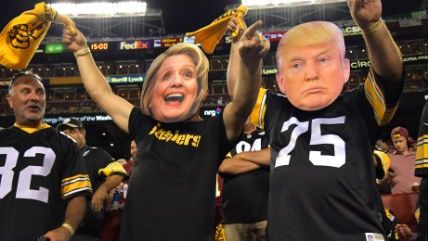 Good economic news from the U.S. Census today getting plenty of media attention: Poverty is down. Wages are rising. It looks likes America might actually be pulling out of recession-level income numbers. The basics, from the Los Angeles Times:

In its annual report on income and poverty, the Census Bureau said Tuesday that the share of people in the U.S. living in poverty dropped to 13.5% in 2015, marking one of the biggest annual declines in decades.

A look through the appendices in the Census report shows that fewer Americans in almost nearly every ethnic demographic were classified as living below poverty levels in 2015. The only exception were Asians, whose poverty levels rose very slightly (and still have much lower poverty rates than other ethnic minorities).

Since the economic populism driving the Donald Trump campaign is heavily tied to frustrations of working class whites, it's worth noting that white poverty is still well above where it was prior to the housing bust and recession, about 1.5 percentage points higher. But white poverty rates for working-age adults (10.8 percent) are still well below those of blacks (21.1 percent) and Hispanics (17.8 percent).

But let's not just look at what these numbers mean in connection with the Trump campaign. Remember, Democrats want it both ways here. They praise the economic recovery (and will credit President Barack Obama because he was in charge during it, though his penchant for regulations probably slowed the recovery down), and yet they call for wage increases that will drive people back out of the marketplace and insist that America has problems with "income inequality."

But we don't, really. These census numbers bolster data about Americans' incomes that had started becoming clear last winter. While folks like Bernie Sanders were yelling about the "vanishing middle class," the data showed that the reason the middle class was getting smaller was because more people were moving upward into the upper class. There was an increase in the number of people whose incomes shrunk, but that number was much less.

So what these new numbers mean is that we're even seeing a drop in the number of people making less money than they were before the recession. Throwing those two data sets together, that simply means we have both more wealthy people and fewer poor people. The success of one group does not have to be at the expense of the other. Democrats should be concerned that the inequality as it stands is geographic in nature, and therefore blanket policies like statewide or nationwide minimum wage hikes are not the right solution and could end up making life even worse for the types of people who are backing Trump.

The Washington Post was quick to turn to the Clinton campaign for a positive response (which won't stop them from encouraging even more wage and workplace interventions) and a Republican source to insist that things really aren't better at all, despite what the numbers say. The Trump campaign itself had not yet responded to the info.

Take a look at the census data for yourself here.